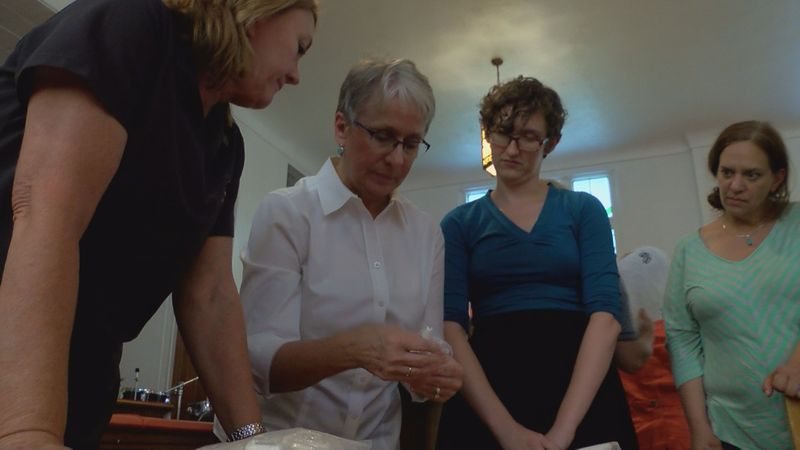 Locals learn how to use Narcan kits, hope to save lives

Dozens of people showed to take advantage of the narcan kit giveaway, provided by Overdose Lifeline, Inc., which has provided Evansville Police and the Fire Department hundreds of Naloxone kits.

According to the Vanderburgh County Coroner’s Office, the county is on its way to surpass last year’s 80 drug overdose deaths, with more than half of those linking back to heroin and opioids.

“You never know who you’re going to run into,” said Velmarie Sitzman, an Evansville resident and CAJE member. “There’s too many kids, and there’s too many adults that unfortunately are on the street and you just never know.” Sitzman told us her first kit she received last year saved a life.

Justin Phillips, a mother, started the nonprofit  “Overdose Lifeline,” based out of Indianapolis. Phillips is also the reason behind Aaron’s Law, a bill signed into Indiana law in 2015 that allows Hoosiers to get a prescription for Naloxone.  It was two years after she could have used one for someone she loves.

“I did lose my 20-year-old son Aaron to a heroin overdose in October 2013,” said Phillips. “At the time that Aaron passed away, I did not know that there was such a thing as Naloxone.”

Phillips now travels across the state teaching people how to use Narcan.  The kits have saved lives locally.

“I just thought…this life is saved, and that’s why it was important,” said Velmarie Sitzman.

So, exactly what does Narcan do? It pulls the opioids off of the brain receptors, which opens them back up. It works very quickly, bringing the recipient back to consciousness in under five minutes. You have got to make sure to call 911 when administering it, which is against the law if you don’t.

“It’s that simple,” said Phillips. “But, this– Naloxone–is one small key, because no one can get into recovery if they’re not alive.”