Armed with the results of a survey of public school students in Charlottesville and Albemarle County, Sheila Herlihy on Monday made her case for bolstering child psychiatric care before several hundred people at the Church of the Incarnation.

“We know of 376 students in our local schools who have seriously considered suicide,’ Herlihy said, “and kids in crisis wait an average of three months to by seen by a psychiatrist at Region Ten [Community Services Board].”

Representatives of the 26 groups comprising the nonprofit Interfaith Movement Promoting Action by Congregating Together vowed action on the issue, culled from community meetings held the month before Virginia’s fragmented mental health system was thrust into the national spotlight with the case of Austin C. “Gus” Deeds. 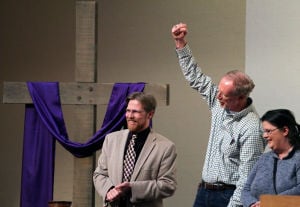 Fred Schneider raises his arm in celebration as his congregation from Hinton Avenue United Methodist Church is welcomed during the IMPACT rally for mental health and unemployment initiatives on Monday at the Church of the Incarnation.

The challenge comes as Region Ten, one of 40 community services boards across the state that form the backbone of the Virginia’s public mental health system, turns to localities facing for help retaining school counseling positions that would otherwise disappear when federal grant money dries up in June.

The nine social workers serving the county and city high schools and middle schools through the federal Safe Schools Healthy Students program worked with 910 students last school year and provided about 6,000 hours of mental health services, according to an annual report.

“We’re scrambling to secure funding for five of those positions,” said Neta Davis, senior director of Child and Family Services for Region Ten. “It’s been an invaluable service for the kids and the point is to prevent disasters and crises.”

Davis said she has requested that Albemarle County and Charlottesville fund two positions each at a cost of about $60,000 per position. Region Ten plans to fund the fifth.

More needs to be done to cut down the wait list for child psychiatry, Davis said, but she estimated the average for an initial consultation at four to six weeks.

“There is definitely a wait here and there is also a wait on the private side,” she said. “We would absolutely love to have a full-time child psychiatrist, but that would cost … more than $100,000.”

The wait for counseling and other mental services is not as long, she said. Davis said the organization provided mental health services to 1,135 children in Albemarle and Charlottesville in the last fiscal year, independent of the work done in schools.

Psychiatric services for children through Region Ten are available 15 hours per week through a contract with the University of Virginia’s Child and Family Psychiatry Department and Horizons Behavioral Health. The service is provided for nine hours each week in Charlottesville, four hours in Louisa County and two hours in Nelson County, Davis said.

“There is a national shortage of psychiatrists, especially in specialty areas such as child psychiatry,” said Eric Swensen, spokesman for UVa Medical Center.

IMPACT organizers say they have tackled complex problems before. Last year, the group took on homelessness and helped organize a coalition of nonprofit associations to share information and secure grant funding.

“Because of our working in separate silos, our community was missing out on hundreds of thousands of dollars in grant funding to address homelessness,” said Al Horton, pastor of First United Methodist Church in Charlottesville.

The group will hear an update on the progress of this initiative at IMPACT’s signature event May 5 at John Paul Jones Arena. The goal in all efforts, big and small, is to promote social justice, said Bob Bayer, liaison to the group for Westminster Presbyterian Church.

“Justice is a state where everybody in the community is related to with respect and with equity,” Bayer said. “Not equality, equity.”