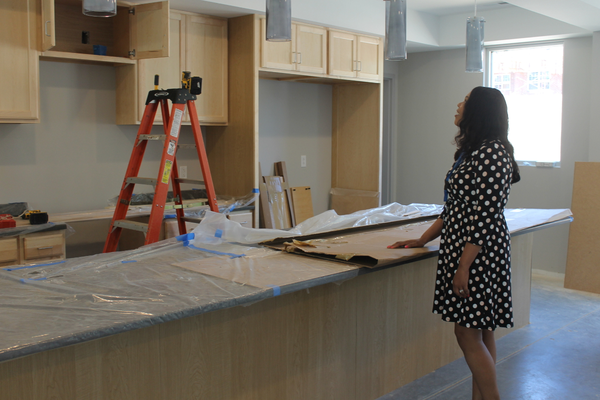 Last year, Caitlin Kelly spoke to a crowd of an estimated 1,000 people about her 17-year struggle with addiction. It was part of a movement to build a place for women in Central Virginia to stay while recovering from substance abuse.

Now, the Region Ten Community Services Board’s Women’s Center at Moores Creek is preparing to host a housewarming party on June 1, and Kelly has just been hired as the center’s certified peer recovery specialist.

“Immediately, I had this draw to the center and knew that no matter what it looked like, I wanted to be a part of it somehow,” said Kelly, who has been sober for two years. “It just feels right, because I do wish that I’d had these services available to me.”

One of the unique parts of the women’s center is its facilities for children. The new building includes a daycare room and space within each woman’s room for two children under the age of 5 to stay.

“There aren’t a lot of facilities like this here in our state. We are the only one in a very large vicinity, but I have been able to talk with others in other states that have implemented programs that are similar, if not exactly the same,” said Mary Jackson, who directs women’s recovery services for Region Ten.

Jackson emphasized that the facilities for children are meant to meet residents’ needs.

“Bringing your children with you might not be for everyone, and if it’s not, that’s OK. It’s not a prerequisite, but it’s also not a barrier,” Jackson said.

The age restrictions on residents’ children ensure that children are not being taken out of school while allowing residents to build the bonds they need for their individual and family health.

“When treatment and services were available to me, and when I was ready to get treatment, there was a need for me to be separated from my son for a period of time, and that was hard and it made some aspects of my recovery impossible,” Kelly said.

The focus on making room for children came early on in the movement that built the center. Interfaith Movement Promoting Action by Congregations Together identified the need for a women’s treatment center in 2014.

“The very first meeting that we had with some of the leaders at Region Ten, they themselves said that this was a gap,” said Janie Pudhorodsky, who is a current co-president of IMPACT. “The women that they found that needed treatment needed to be sent at least 70 miles away to either Culpeper or Lynchburg, and a lot of the women wouldn’t leave their children behind and go that far away.”

Through several years of rallies and meetings with various stakeholders, IMPACT organized a partnership between the city of Charlottesville, Albemarle County and Region Ten. Both the city and county have committed to donating $75,000 per year to the women’s treatment center for its operations.

Those interested in staying at the center can call Region Ten at (434) 972-1800. The center also will take referrals from community services boards in other parts of the state.

The center has eight private bedrooms, space for group and individual therapy sessions and a shared kitchen. Residents will follow a precise schedule of meals and classes for eight months, or however long they need to prepare to go back out into the world.

“It’s hard for people in general sometimes to keep a schedule, but especially in recovery, what we know is that having a routine is really important to maintaining sobriety,” Jackson said.

Jackson said she wants the center to feel like a home. As Jackson recently gave a tour of the center, which is still under construction, she joked that she should install similar light fixtures in her own house.

At the end of the tour, Kelly paused by the day-lit entrance and sighed to herself, “I love this place.”