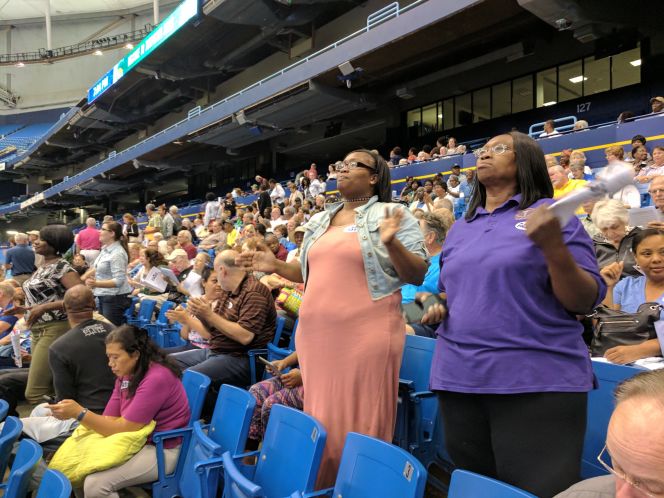 ST. PETERSBURG — City and county officials were asked to commit millions of dollars of sales tax revenues to build more affordable housing in Pinellas during a gathering of about 3,000 people Monday night at Tropicana Field.

The program was the latest effort by a group of religious congregations called FAST, with the motto “Faith and Action for Strength Together,” to get local governments to spend more money to secure housing for the county’s poorer residents.

“I pay over a third of my income for a small apartment in Dunedin,” she said. “Until last week, my windows have been bolted shut from the outside.”

FAST is asking public officials to use more of the 1 percent sales tax known as “Penny for Pinellas” for affordable housing. The voter-approved tax brought in $1.45 billion for local infrastructure projects over the past decade.

It’s on the ballot for voters again this November. If approved, county officials project the tax would bring in $2 billion over the next decade, assuming steady economic growth for the county.

Right now, 1.3 percent of the tax revenue is committed to go directly to affordable housing initiatives, which would add up to about $25 million over the next decade if the estimates bear out.

FAST leaders are asking for an overall commitment of 8.8 percent of Penny for Pinellas to go directly toward affordable housing. Additionally, they’re asking city officials to commit 10 percent more of the city’s portion of the tax. Current plans call for city governments to share 48 percent of the tax’s total revenues.

St. Petersburg council members Lisa Wheeler-Bowman and Darden Rice both pledged to the crowd that they would support spending 10 percent of the city’s Penny for Pinellas funds on affordable housing.

“I think everyone deserves a fair shot at the American dream of homeownership,” Rice said.

Mayor Rick Kriseman and council member Karl Nurse said they didn’t support that level of spending due to the need for improvements to the city’s sewer system, which Kriseman estimated would take up 75 percent of the city’s Penny for Pinellas funds. Nurse said the city would have to raise water and sewage rates if the sales tax funds went elsewhere.

“We have significant needs as it comes to infrastructure,” Kriseman told the crowd.

Council member Charlie Gerdes said he didn’t have enough information to pledge support to either request, and council member Steve Kornell said he believed money spent on economic development would help solve the problem instead.

“People in our community are working very hard but not able to make ends meet,” Kornell said.

The county’s current plan sets aside an estimated $149 million of the fund to economic development. But Paul Gibson, pastor of Trinity Lutheran Church in St. Petersburg, said that the priority should be on building more affordable housing, not on just economic development, which helps people who already have access to high-skill jobs.

“What does that do for retirees, the elderly, and the people without those job skills?” he asked. “The land we have left has to be dedicated to housing.”