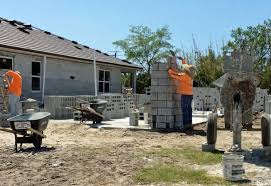 The proposals likely will focus on promoting different types of housing than the most-common single-family homes being built, relaxing sometimes burdensome rules about parking and expanding the ability for homeowners to rent available spaces, County Administrator Tom Harmer said.

Those are some of the most immediate changes the county can make while it, municipalities, developers and nonprofits craft new ways to work together to promote housing for those making the average area wage in the low $40,000 range or less, according to a new report on affordable housing finished this week.

The final report outlines 18 recommendations for all of the groups to consider, ranging from tweaks to county rules to incentives for businesses to raise their wages. Some are specific and others are more nebulous, such as building new community partnerships.

The issue has dogged the county for decades, returning to the spotlight again as the area has recovered from the Great Recession, and commissioners are expected to discuss the full report at another meeting this summer.

But in the meantime county staff should start work on their specific proposals, commissioners agreed.

The issue also is the focus this year of Sarasota United for Responsibility and Equity, an interfaith coalition of local churches that throws its extensive community support behind policy issues to demand changes. Last year the group successfully pushed for increased use of civil citations instead of arrests for minors for legal infractions.

Now it’s setting its sights on holding officials accountable for their vocal support for new affordable housing rules and several members spoke in favor of the September deadline.

“This is just the beginning; we’re definitely going to need your support,” said Commission Chairman Paul Caragiulo, who proposed the deadline. “It’s not easy to change a mindset that has been evolving in this community about housing, affordability and what it all means … I applaud you all for your engagement.”