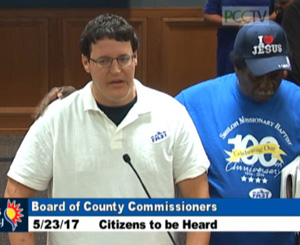 CLEARWATER – Several members of Faith and Action for Strength Together spoke to Pinellas County Commissioners May 23 about the critical need for affordable housing.

The faith-based organization made up of 40 local church congregations, better known as FAST, has long urged the commission to spend more money to increase the county’s inventory of affordable housing. The group’s efforts have been fruitful in past years with the commission agreeing to place millions of dollars from Penny for Pinellas in an affordable housing land assembly fund. Unfortunately, not all the money pledged made it into that fund thanks to the economic downturn and budget cuts.

Still, enough money made it into the fund to make a difference over the years. But, especially as rent prices continue to increase, it is not enough. According to FAST, a low-end two-bedroom apartment in this county costs $1,200-$1,300, and many county residents pay more than half of their income on rent.

Now FAST is asking that a portion of the next Penny for Pinellas be dedicated to affordable housing.

The Rev. Kathleen Walter of St. John’s Episcopal Church in Clearwater told commissioners that 7,000 to 16,000 in the county were on a Section 8 waiting list. Section 8 is a federal program that helps very low-income families, the elderly, and the disabled pay for safe and sanitary housing in the private market.

“We’re in an affordable housing crisis,” she said.

She said she supports Commissioner Ken Welch’s proposal to take 4.4 percent off the top for affordable housing, which would amount to $85 million, and separate the funding from money dedicated for Economic Development. She said she had 500 signed post cards from other people in support.

Commissioners are making plans for the best use of the next Penny for Pinellas, a 1 percent sales tax dedicated to pay for capital projects. The current proposal from staff for spending of the estimated $2 billion to be collected over a 10-year period, 2020-2030, is to allocate 11.3 percent, or 225 million for countywide investments. Staff recommends that 3 percent of that money, which amounts to $60 million, go toward jail and court facilities with the remaining 8.3 percent, $165 million, going to capital projects to boost economic development and pay for housing needs.

FAST wants the 8.3 percent to be divided between economic development and housing, providing a dedicated revenue stream for affordable housing.

However, what FAST wants isn’t exactly what Welch is offering to support. He told the group that he would support a 50-50 split, which would be 4.125 percent, or $82.5 million, going to housing.

“I want to make it clear what I’m willing to support,” he said.

Ten speakers lobbied to dedicate Penny money to affordable housing. Several talked about their personal struggles to find a place to rent. Michael Anderson, who is currently homeless, was visibly upset as he told commissioners how hard it is to find affordable housing.

He graduated from college two years ago and is currently working on a post-graduate degree. He recently lost his job that had included housing as part of his employment. Now he is staying with people from his church and the community.

“I need help. People in this county need help,” he said. “Will you please help us?”

Florette Young, who owns a small apartment building in St. Petersburg, said she can no longer afford not to raise the rent due to rising costs of maintenance and her other bills.

Her tenants are on a fixed income. She is worried they will have to relocate. She says there is no place else to rent a one bedroom apartment for $595 a month.

“We truly need affordable housing,” she said. “These seniors are too old to be bouncing around.”

Developers face a challenge with density. Most of the mobile home parks are grandfathered under old code that allows for higher density. To rebuild on the same land under the new code, which allows lesser density, is not as profitable.

Staff’s plan would put a framework in place in the Lealman CRA only to create special exceptions for redevelopment of older mobile home parks. The density would be lower than what is allowed under the old code, but higher than what is permitted under the new code.

If successful, the plan could be used in other blighted areas of the county with a high concentration of mobile home parks. To qualify for the special exception, the mobile home park cannot be abandoned and the developer would need an acceptable relocation plan for the residents.

The proposed ordinance will go to Forward Pinellas for review before being transmitted to the state. Staff estimates it will come back to the commission for a second public hearing in July or August.

In other business, the commission:

• Approved proceeding with negotiations for Tourist Development funds for the American Craftsman Museum in St. Petersburg. The previous vote on the item resulted in a tie, but Commissioner Charlie Justice was absent. Welch, who along with Commissioners Pat Gerard and Dave Eggers supported moving forward, requested a vote by the full commission. Commissioners Janet Long, Karen Seel and John Morroni were opposed. Justice’s yes vote broke the tie and the funding request will move to negotiations.

• Approved an agreement with the Florida Department of Transportation for a beautification project for the Pinellas Bayway.

• Approved a lease agreement with the Florida Dream Center for the former Lealman fire station, 4017 56th Ave. N. Heard a request from local Rotary clubs that would like to collaborate with the county to make improvements to the building.