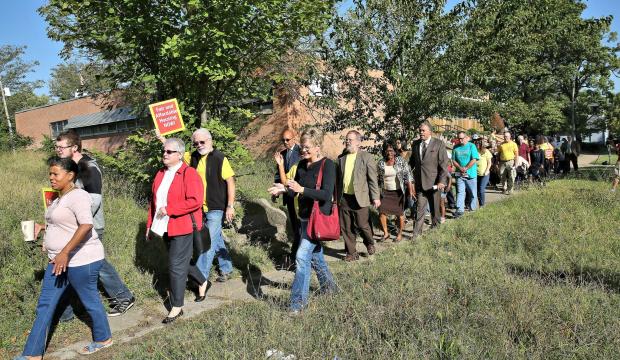 After two years of working with Mayor Larry Wolgast and other city officials, members of a 20-church organization are calling on the Topeka City Council to create a trust fund to address the capital city’s affordable housing crisis.

“This is about making what we have bigger,” said Shanae Elem, of Topeka JUMP. “A local affordable housing trust fund is local money. It can be used for however our community wants for it to be used, and that’s why having a local trust fund is impactful.”

About 50 members of Topeka JUMP gathered Friday morning on the steps of the Inward Faith Outreach Ministries, S.W. 7th and Polk, and marched as a group to push for the trust fund, something they said would begin to help the estimated 7,000 families they say are living in “unstable and unsanitary conditions.”

“We know that the mayor and city staff are working to develop a plan, and we do applaud those efforts,” said Carol Babcock, a member of Topeka JUMP. “But we requested this plan in 2015. How much longer must we wait?”

Babcock said one out of four eligible Topeka families is receiving rental assistance, and roughly half of the people who pay rent in Topeka are using 50 percent of their income on housing. Thirty percent of one’s income is considered the standard percentage to pay for housing and it be considered affordable.

Sweet Divers, of Inward Faith, another member of Topeka JUMP, said the neighborhood just west of downtown where the church is located is overrun with trash and full of substandard housing units whose residents can’t afford to live anywhere else.

“Our neighborhood has been overlooked far, far too long,” said Sweet Divers, another member of Topeka JUMP. “We want justice and we want it now.”

Elem said the proposed trust fund, similarly modeled after one used by the city of Lawrence, would be a mix of private dollars and public money. She said the advisory board would be diverse and represent developers, business people, nonprofits and community representatives, to name a few, who would have public accountability because they would have to report their work to the city council at least once per year.

“The idea is that we’ll be able to have larger projects done in Topeka,” she said. “It’s about construction of units, rehabilitation of units and supporting some of the things that we already do but to meet the needs of more people.”

Topeka governing body members last spring considered budgeting $500,000 of more than $9.8 million in leftover revenue the city received from a countywide sales tax to go toward developing affordable housing and redeveloping and revitalizing Topeka neighborhoods. But that body voted 9-1 on May 16 to instead earmark all the windfall money for a pavement management program the city is development.

Elem said organizations like the Topeka Housing Authority, Cornerstone and Topeka Habitat for Humanity would be eligible to tap into the proposed trust fund.

“It’s not creating a new player in the game,” she said. “This just gives them more resources to do what they already do very well. Those entities would get to apply for this money and use some of this money.”

Elem said she’s hoping the trust fund will be on the city council’s agenda either this month or in November for approval.

“We want to get moving,” she said. “Once it does get implemented, we’ve got work to do.”