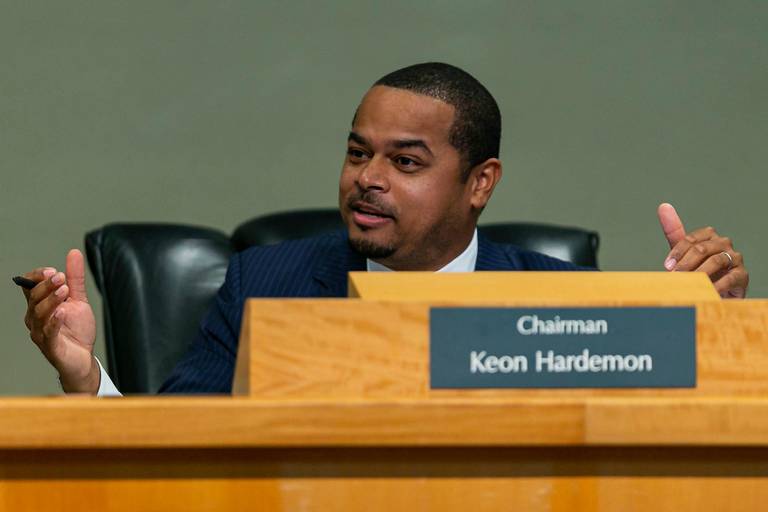 After a tussle over semantics, Miami city commissioners delay approval of housing plan

After a heated tussle over semantics and the legal repercussions of the words “approval” versus “acknowledgment,” the Miami City Commission on Thursday voted unanimously to accept the Miami Affordable Housing Master Plan prepared by Florida International University and reconvene at a special session at 10 a.m. on Jan. 31 to dig into its findings.

The wording on the meeting agenda asked the commissioners to vote on “approving” the master plan and authorizing the city manager to “negotiate and execute” all necessary documents related to the plan. The vote would have incorporated the plan “effective immediately.”

But Commissioner Joe Carollo moved to amend the agenda, asking the commissioners to vote on “acknowledging receipt” of the plan and to set a date for a full review of its recommendations.

“I will have the weekend to dig through this,” he said. “I’m sure there’s a lot of good stuff in there. I’m a graduate of FIU with two degrees there and they have a fine school. The point is that there’s a lot here,” in the report.

Commissioner Ken Russell agreed with Carollo — and pointed out the city had already held a public workshop on the plan with FIU at a packed meeting on Jan. 9, which Carollo and Commissioner Keon Hardemon did not attend.

“We should have a special meeting where FIU presents the findings and commissioners can attend — oh wait, we already did that,” Russell said, generating applause. “There were three of us there. This is a consent agenda item that says we have received the findings. We have been given a presentation. Some of us showed up for that presentation.”

Russell’s jab annoyed Commissioner Alex Díaz de la Portilla, who also attended the previous workshop and seemed to have been leaning toward approving the plan.

Another stumbling block for the vote: The current city manager, Emilio González, who would have assumed oversight of the plan, resigned on Jan. 16, a week after the first commission meeting of the year collapsed and ended abruptly. González had also been accused of abusing his power. His replacement has not yet been named.

A ROAD MAP TO HOUSING

More than a year in the making, the Affordable Housing Master Plan lays out an ambitious, 10-year plan to build or preserve 32,000 affordable housing units within the city of Miami. The plan hinges on the formation of a Miami Affordable Housing Financing Corp., whose appointed board members would have the ability to leverage $85 million of voter-approved bonds earmarked for housing into $1 billion in incentives.

The public-private partnership would be overseen by city of Miami officials but would also work independently, expediting the permit and approval process for small developers interested in building or rehabbing smaller buildings, from five to 50 units in size.

More than a dozen people from various advocacy groups, including the Community Justice Project and People Acting for Community Together, implored the commissioners to adopt the plan, citing the urgency of the region’s housing crisis.

“It’s a bold plan,” Annie Lord, executive director of Miami Homes For All, told the Herald. “It puts resources where they belong in terms of right-sizing the solution where it’s most needed, which is extremely low-income people. The majority of the problem lies with low-wage workers. Housing affordability affects all income spectrums, but the people with the biggest need are service workers in the transit, hospitality and health industries.”

Stephanie Berman-Eisenberg, president and CEO of the nonprofit Carrfour Supportive Housing, stressed the urgency in implementing the plan.

“We as a community have been stuck in this mode of talking and symposiums and now we’re in a housing crisis,” she said. “It’s a good plan that is multi-faceted, but it needs to be put into action quickly. It’s only going to be good if something is done about it immediately.”

Some people who were attending the commission meeting for other reasons also spoke in support of the plan. Hilton Napoleon, an attorney representing the owners of La Placita restaurant fighting to preserve the mural adorning their building, took to the microphone to speak about personal acquaintances who were priced out of their home city.

“I’ve had four friends — born and raised Miamians who went to school here and worked as public school teachers — who left Miami and relocated to Georgia over the last few years because they couldn’t afford to pay their rent,” Napoleon said. “One of them was an AP English teacher at Coral Reef Senior High. Another one, Barbie Esquijarosa, was named the 2020 teacher of the year of the Marietta school district. We have to do something to allow people to be able to afford to live here.”