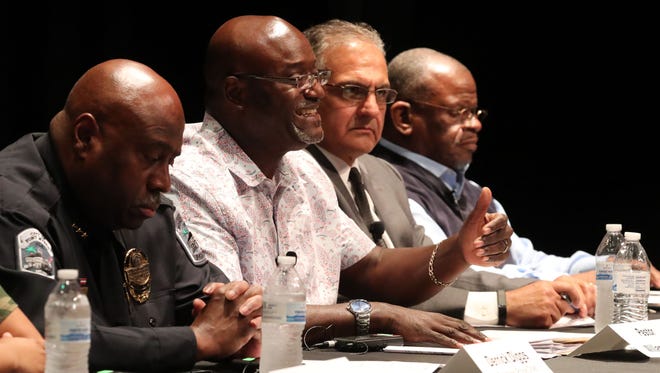 More than 300 Fort Myers residents flocked to Dunbar High School to hear ministers and activists call for action Monday for affordable housing and day care and heard their religious leaders criticize four city council members they had expected to attend.

One of the four, Councilman Fred Burson, said he did not attend because city attorney Grant Alley called the council members and told them not to attend because of the possibility that it could violate the state Sunshine Law requiring open government.

“(Alley) said that even though we would not be in the room at the same time, he felt like we could be accused of daisy-chaining the information and it needs to be in a public forum,” Burson said. “We just want to do it the legal way.”

The ninth annual Nehemiah Action rally, sponsored by Lee Interfaith For Empowerment, known as LIFE, was among similar rallies conducted in 10 Florida counties and communities. The rallies are named for a biblical figure credited with rebuilding the wall of Jerusalem after it had been destroyed.

“Many of us came out tonight because our hearts hurt for those in our community who need housing,” said Rev. Dr. Rickey Anderson, of Followers of Christ Fellowship. “We came in spite of fear of violence. We came in spite of traffic and busy schedules and the need for child care.

“We had planned for six months, ever since this has been scheduled, our officials …  for some they have reached out to say why they are not here tonight.”

None of the council members were in attendance. Two, Theresa Watkins Brown and Kevin Anderson, have had dialogue with the group on the housing trust fund issue in the past.

Leaders had expected the other four to be there and hear more about the role of the proposed trust fund in meeting the city’s housing needs. None of the four — Burson, Gaile Anthony, Johnny Streets and Terolyn Watson — were on hand for the meeting.

Rev. William Glover, who presented the case for a housing trust fund proposal to the audience, said council members may have relied on a misinterpretation of the state Sunshine Law.

Two members of the Lee Board of County Commissioners, Cecil Pendergrass and Frank Mann, were in attendance, although their paths did not appear to cross during the meeting. Mann left before Pendergrass spoke.

A member of the state Legislature in the mid-1990s, when the Sunshine Law was adopted, Mann said it was never intended to prevent two members of a public board from attending a public meeting.Get the Coronavirus Watch newsletter in your inbox.

Updates on how the coronavirus is affecting your community and the nationDelivery: VariesYour Email

“It all comes down to one thing — don’t talk with your colleagues about something that may come up for a vote,” Mann said in a phone interview. “I don’t have to clarify that with my county attorney when it’s been that way all along.”

The large crowd was enthusiastic when supporting the proposals for affordable housing and child care, as well as in backing a call for more use of civil violations, rather than arrest, when dealing with juvenile offenders.

During the session, which lasted about an hour and a half, residents affected by the lack of affordable housing and the high cost of day care explained the cost of having housing or day care unavailable or taking too big a chunk from the family budget.

Resident Tedia Nonay recalled the efforts of her brother to find a place to live in Fort Myers so that he would no longer have to spend nights sleeping in his car.

“He gave up trying to live here. He wanted to be close to his family, but because of lack of affordable housing, he decided to move back to Ohio,” Nonay said. “Less than a month after moving back to Ohio, he was about to find housing. He lived here for over a year and could not find affordable housing. It would cost him over half of his income to have a place to sleep at night.”

An affordable housing trust fund advocated by the LIFE group would collect $3 million from the city to be used as loans and grants to increase the availability of apartments for at or below 50% of the median family income. The maximum rent would be 30% of a family’s income.

He said when voters doubled the document tax on real estate transfers, it was intended to be used for affordable housing.

“The Legislature stepped in and used that to balance the budget,” he said. “Think of all the millions that we could have had for affordable housing.”

Spending too much for housing means less for other needs such as child care. Glover noted that 22 infants and 375 year-old babies are on waiting lists for child care in Lee County.

“I work in child care and I’m a mother of a 3 month (old),” Jefferson said. “It is not an option. Research has shown that a child’s first years of education have an impact on their success for the rest of their lives. I would rather see our resources fund the children at child care facilities rather than youth or correctional facilities.”

Some progress on the housing initiative could be seen in coming weeks.

City Manager Saeed Kazemi has told city council members that he will schedule a council workshop on the issue and invite LIFE to participate.