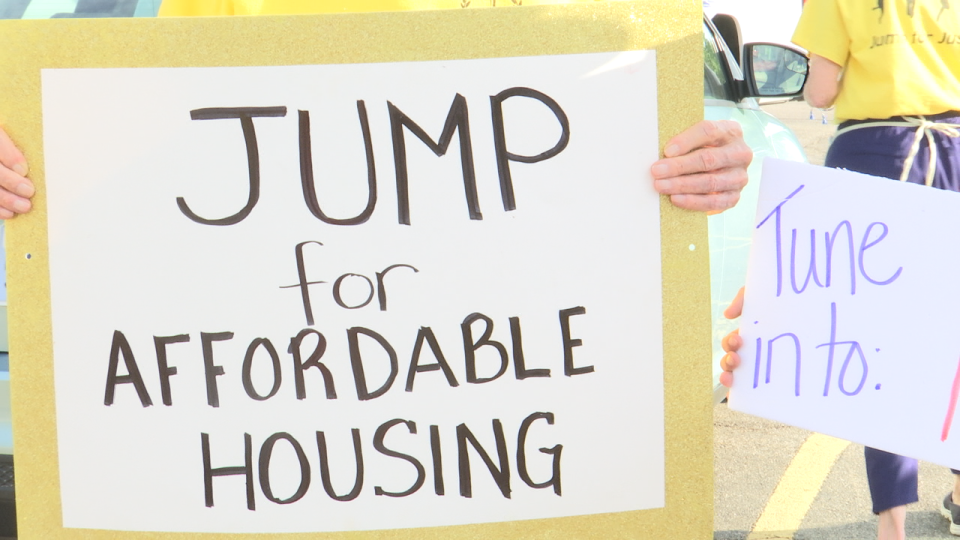 Every year JUMP brings at least one issue to the public’s attention.

People from 28 congregations all over Topeka and Shawnee County “drove in” to listen to the meeting on their car radio while still feeling a sense of togetherness despite a pandemic.

Kay Foster Joined the drive in rally and has lived in Topeka her whole life. Foster said she’s observed a rise in homelessness.

“A much more obvious presence,” Foster said. “I’m kind of with the Rescue Mission and know how they try and be there to assist folks who find themselves in those traits but they can’t do it alone.”

About 50 people participated in the drive in rally.

On the Zoom call, two main groups were at the center of attention: the Kansas Department for Aging and Disability and the City of Topeka.

“Will you advocate for this full proposal to be awarded?”

“Yes, I will absolutely be an advocate,” Andy Brown, Behavioral Health Services Commissioner with KDADS said.

Brown revealed that he has been sober for 24 years himself and knows the importance of housing like Oxford Houses himself, having spent a year in communal living for those in recovery.

“That experience meant a lot to me and it really invested in me the strength and the hope that comes with recovery,” Brown said.

Nine JUMP leaders met with Brown to talk about expanding Oxford Houses earlier in the month and encouraged them to submit a proposal in writing to KDAD. The Friends of Recovery Association and JUMP sent their letter asking for asking for $261,000 for two years of funding.

Some of the items they need to pay for are a fulltime outreach coordinator who will help recruit landlords, a startup fund for furnishing and a fund for new members to get on their feet.

Shifting their focus to affordable housing, JUMP highlighted that over 15,000 people in Topeka make less than $41,000 a year, using Allen Fieldhouse at the University of Kansas as their analogy, to illustrate how an arena-full of fans is equivalent to the amount of people who need better housing conditions.

The presentation detailed that out of those 15,000 families who are at risk, Topeka can adequately house just 4,820 of them. Because of work that JUMP did in previous years, the group was able to revise the housing trust fund ordinance in 2019 and the city allocated $277,000 in the trust fund in 2020.

Additionally, the city of Topeka ran a housing study as a result of their urges. According to Steve Schiffelbein with JUMP, studies by the city show that there is a shortage of safe and affordable housing in Topeka. That is only a 30% need met.

“We’re hoping that we would get money into the housing trust fund, which is a cost effective proven method to entice private investment,” Schiffelbein said.

The housing trust fund is a policy that creates financial incentive for developers to create and preserve affordable that can be funded both publicly or privately.

The Board of Directors challenged Topeka City Manager Brent Trout to propose $5 million into the housing trust fund, which he could not promise as of Monday night.

“Will you make a proposal to the governing body by October of 2021?

“My proposal may not make it there by October 2021 but I can tell you we will have those discussions in late 2021 as we enter our decisions related the governing body,” Trent said.

The group also asked for the proposal of $5 million to be moved into the housing trust fund in January of 2022. While Trout didn’t directly answer yes to their question, the people of jump took it as a cause for celebration and honked their horns in person and applauded over Zoom in celebration of a successful night.

“We are looking forward to gathering in person one of these days very soon,” Schiffelbein said.