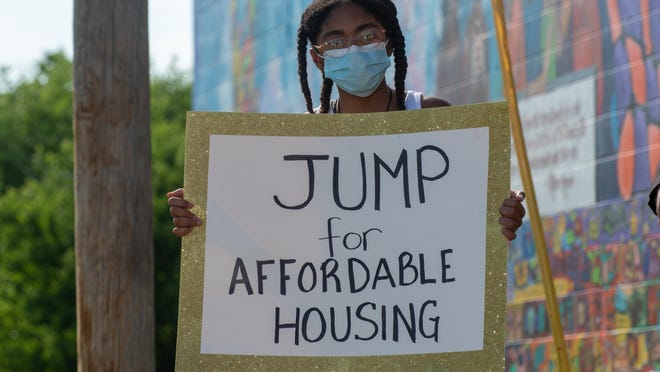 Topeka is heading in the right direction on affordable housing trust fund. Here’s what the city needs to do next.

By The Editorial Advisory Board, the Topeka Capital-Journal

Topekans need quality places to live that don’t cost an arm and a leg. And they deserve a city that helps make that happen.

That’s why it was a great idea late last year when an affordable housing trust fund was included in the city’s housing study implementation plan That’s why it was a great idea that the Topeka City Council last week “unanimously approved $250,000 for its Affordable Housing Trust Fund, making it the first substantial investment in the fund,” in the words of The Topeka Capital-Journal’s Blaise Mesa.

But let’s be honest here. Given what’s happening with real estate prices throughout the country, perhaps we should build up that fund a bit higher before beginning disbursements.

In its Nehemiah Action meeting last month, the Topeka Justice Unity & Ministry Project and city officials talked about the need for affordable housing. Importantly, they also discussed how to fund it. There was agreement that the trust fund not only needs more money, but a steady and reliable stream of the same.

Money will be coming to the city through the national American Rescue Plan act, but officials aren’t certain about restrictions on its use.

Allow us to make a couple of suggestions.

First, a truly robust trust fund would generate pay for affordable housing through interest alone. That would likely require a broad buy-in from the community and businesses across Topeka. But it would also position the program for long-term success.

Second, if those funds can’t be raised up front, it’s important that the city at least receive commitments for regular funding. Perhaps members of JUMP could contribute something to get the private investments started. The point is, Topeka shouldn’t be in the position to help a small number of people one year and then not be able to follow up.

The real estate landscape, as noted above, looks challenging for everyone these days. That includes folks with real resources, who are struggling to land homes in a white-hot market.

That means that city officials and activists may need to look outside conventional options. Think tiny houses, rezoning or allowing denser development in places, and rehabbing buildings. Topeka will need all of the above to meet the demand.

We’re sure that folks know and understand this. The addition of these funds was an important move by the city, and we commend it wholeheartedly. But it’s just a first step.