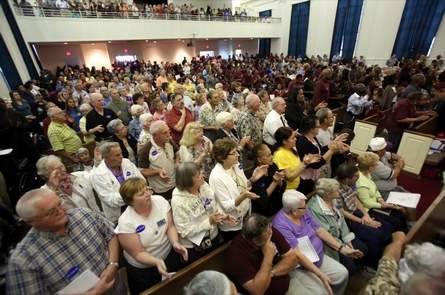 A standing-room only crowd packs the sanctuary Monday during the 14th annual PEACE Nehemiah Action at St. Joseph’s Academy in Lakeland. Polk Superintendent of Schools Kathryn LeRoy said the district is working to find ways to reduce school based arrests.

“If we’re going to improve our student achievement and have our students succeed, they have to be in school,” LeRoy said, adding “We need a lot of professional development for both teachers and administrators on respect.”

She said the district is working to find the best ways to reduce such arrests, that she will develop an initial proposal by Aug.15, will give a copy to PEACE and will review it with PEACE by mid-September.

By January 2015, LeRoy said, implementing a finalized proposal can begin.

PEACE is a coalition of 19 churches. Its members research issues and seek collaboration from elected and appointed officials for changes aimed at solving problems.

Emotional statements from several pastors, recalling their own youthful experiences with being punished but not arrested or sharing accounts they have heard from their parishioners, underscored how deeply they feel about what they’re asking in 2014.

“I wouldn’t be here tonight if I had been arrested and not corrected,” said the Rev. Ronnie Clark of Hurst Chapel AME in Winter Haven.

Smith said he supports making records of first-time minor offenses inaccessible and using evidence-based needs assessments to get necessary services for the children.

He said “no,” however, when asked to take whatever steps are needed on such actions as putting those records in a different records system by May 1.

How it gets done “isn’t entirely my decision,” Smith said, but he will take the issue to his partners in the criminal justice system.

One key partner, State Attorney Jerry Hill, who was invited with the others to PEACE’s 14th annual Nehemiah Action, didn’t come to the standing-room only meeting that brought at least 1,450 people to St. Joseph’s Academy in Lakeland.

PEACE is focusing on Polk’s high number of arrests of youths, which PEACE said was 975 arrests for first-time, minor offenses.

“These kids have a record and these records are getting out,” said the Rev. Cory Britt of First United Methodist Church in Lakeland.

“We are going to need to see significant changes if we are going to see the number 975 go down,” said the Rev. Clifton Dollison of First Missionary Baptist in Winter Haven.

Putting youth arrests for first-time minor offenses in a separate “prevention web” instead of the regular juvenile justice database.

Had Hill come, he would have been asked for the same support and actions as Smith. Both are in the 10th Judicial Circuit of Polk, Hardee and Highlands counties. Smith said Polk has an effective system, Teen Court, for pre-arrest and pre-trial diversion.

“I am open to suggestions to make that system even better,” he said. “We are always looking for ways to improve the current system.”

That drew applause despite his not agreeing to the May 1 deadline. The system PEACE is proposing is used in other counties around the state, PEACE said, but Smith said it hadn’t worked in the past in Polk. Dollison thanked Judd for his ongoing support, telling the audience, “The sheriff has demonstrated leadership in this area.”

Judd said arrests of juveniles were down 26 percent. He challenged parents and religious leaders to do more to keep children on track.