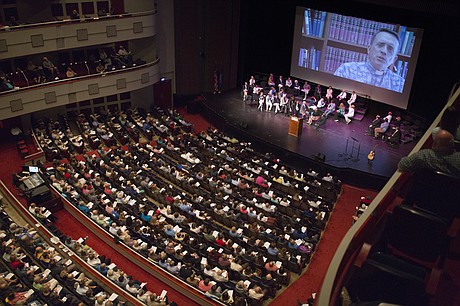 LAWRENCE, Kan. – While Douglas County considers a $30 million proposal that would expand its jail, a large group of faith leaders are pushing for what they believe is an alternative approach that would dramatically cut down on arrests.

“Put fewer people in jail and provide good mental healthcare for those who need it,” said Joanna Harader, pastor of Peace Mennonite Church in Lawrence and spokesperson for Justice Matters.

Justice Matters consists of 23 congregations in Lawrence. One current item on their agenda is to help the county find ways to help those with mental illness and substance abuse disorder avoid jail. They believe the main way to achieve that goal is putting more money towards a full-time crisis center and not more money into expanding the current jail.

“They don’t have a crisis center to take them to, so that leaves our police with few alternatives,” said Harader. “If you add beds to a jail, you’ll fill them up and you’ll think you’ll need to add more beds.”

Harader and the county both acknowledge that a large problem has been the explosion of female inmates.

“Over 80 percent of women incarcerated nationally are suffering from some form of addiction issues and mental health issues,” said Harader.

Bieniecki acknowledged that a separate proposal would add a mental health crisis center for inmates. However, Justice Matters wants to see more done to help those people before they land behind bars.

More than 13,000 people with mental illness or substance abuse disorder were taken to local ERs and jails last year in Kansas City alone.

“If they had a place to take them like this they wouldn’t end up in jail,” said Alan Flory, president of ReDiscover at Kansas City Assessment Triage Center.

The center opened in Kansas City Monday. There are only a few like it in the country.

“It is unique because our role is to help divert people from jail and unnecessary hospital emergency room visits,” said Flory. “All the research shows that when you provide treatment, not only is it cheaper than jail but it’s more effective. The recidivism is far lower.”

The 24-hour facility can hold up to 16 people at a time. The center will focus on stabilizing patients before getting them into a room with a social worker and case manager, who will then discharge them within 24 hours, following up on them at a later time. Patients must come in voluntarily and it is only open to those being brought in by KCPD or by approved emergency departments. It’s the type of facility those with Justice Matters feels will positively reshape Douglas County.

The County Board of Commissioners has not put the jail expansion proposition on the ballot, but could consider doing so in 2017.

According to Bieniecki, other ways Douglas County plans to cut down on their jail population include: