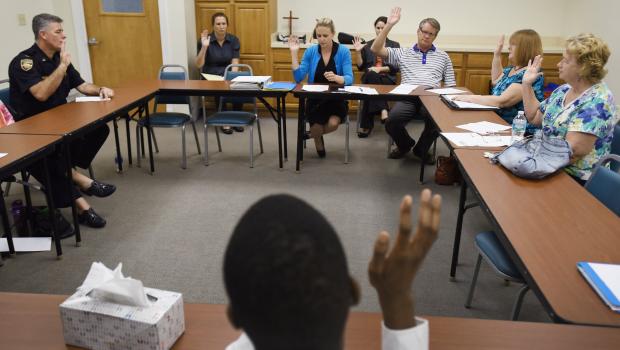 An interfaith advocacy group that wants to increase the use of juvenile civil citations here is setting a new benchmark for success — and putting pressure on the Jacksonville Sheriff’s Office to make it happen.

Interfaith Coalition for Action, Reconciliation and Empowerment, or ICARE, wants to see 90 percent of eligible kids receive civil citations instead of being arrested for misdemeanor offenses. Police officers can issue the citations, which do not require an arrest or create a criminal record, to juveniles who commit minor crimes.

Statewide, civil citations have about a 5 percent recidivism rate compared to 10 percent for child who are arrested and then diverted from the traditional delinquency process.

However, the Department of Juvenile Justice shows that Duval County has long lagged in this effort. In the calendar year 2016, only 28 percent of the 651 eligible kids received citations. In that time frame, the Jacksonville Sheriff’s Office arrested 408 youths and issued 151 citations.

Across the state, 52 percent of eligible kids received a civil citation. In Miami, 94 percent of kids did.

The Sheriff’s Office has made a commitment to increase the number of citations, but Nancy Ricker of ICARE said, “the numbers don’t show they’ve turned the corner.”

Lauri-Ellen Smith, senior public affairs and public relations executive with the Jacksonville Sheriff’s Office, said Sheriff Mike Williams has met with ICARE and has agreed that civil citations will be expanded to include more offenses.

The State Attorney’s Office and the sheriff’s office are working together to revise the memorandum of understanding that dictates when citations can be used locally. State Attorney Melissa Nelson, who took office in January, has promised to allow the use of citations in cases of misdemeanor battery, something her predecessor Angela Corey was vehemently against.

Ricker, who serves on all four of the neighborhood accountability boards that sanction many civil citation cases, said they’re already seeing batteries go to the boards. Civil citations are sanctioned by community members, including a police officer, with essays, counseling, drug treatment, community service and letters of apology.

There is legislation pending that would require police across the state to issue civil citations for 12 misdemeanor offenses. Groups like ICARE and its partner organizations say it’s necessary. Opponents say it takes away the discretion of the responding officer.

Ricker said the number of arrests “don’t reflect that discretion is working.” More than 8,800 eligible youth were arrested in 2016, according to the DJJ.

Smith said the Sheriff’s Office is monitoring the bill, but this early in the process does not have a stance on it.

ICARE wants to get the entire Duval-area delegation behind the legislation, but is not having luck. Ricker said so far, state representatives Kimberly Daniels, Clay Yarborough and Jason Fischer have not responded to ICARE’s requests to learn their respective stances on the bill and Jay Fant is opposed to it.