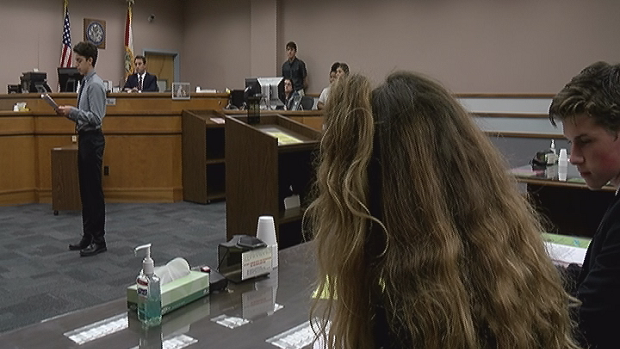 Will civil citations save teen futures?

SARASOTA, Fla.(WWSB)–New legislation in Florida is aiming to keep young offenders out of the criminal justice. State Rep. Joe Gruters (R) Sarasota and State Sen. Greg Steube (R) Sarasota are co-sponsoring the bill, which would increase the use of civil citations as an alternative to arrests.

“It’s not something I ever considered or even thought would happen,” said Alvira Simmon.

Her son, Marquell, was in 7th grade when he got into a fight at school. What happened next would alter the course of his life.

“There was a nosebleed, and the police were called,” said Simmon. “My son was arrested at school and he was charged with battery.”

Seven years later, it’s still Marquell’s only run in with the law. Yet, it was enough for a local retailer to deny his application for a stock room position.

“It was the only thing that was listed on the reason for his denial of the job,” said Simmon.

Marquell’s story isn’t unique and it’s far from the worst. It’s stories like Marquell’s that inspired lawmakers to fill legislation to make civil citations mandatory for all law enforcement.

An alternative to arresting juveniles for first-time misdemeanors, civil citations instead send kids to a diversion program.

Sen. Greg Steube and Rep. Joe Gruters are co-sponsoring the bills in the senate and house respectively.

“What happens is if they get an arrest record tied to them as a person, it could be detrimental to them getting a job later on, getting into the military,” said Gruters. “And really what it’s trying to do is trying to give some of these non-violent youthful offenders a second chance by taking one of these diversion programs.”

The bill outlines a dozen misdemeanor offenses such as theft, possession of drugs or alcohol, and other common mistakes made by teenagers.

Suncoast Pastor Patrick Miller is lobbying for the bill with the non-profit Sarasota United for Responsibility and Equity.

“Just in the past year, 10,000 were arrested and ended up with criminal records that they would not otherwise have if they were given civil citations,” said Miller. “Our goal was to reach as many as possible through legislation.”

Civil citations would be recorded by the Department of Juvenile Justice, separate from criminal charges that go on public record–of which, each minor is only allowed three.

“It’s not that teen court is a good program, it’s a great program,” said Miller. “It’s just not reaching the masses and every county doesn’t have a teen court.”

Sarasota county has had teen court for 28 years, serving over 11,000 juveniles in that time.

For years, officers could make direct referrals to teen court. Kids like Katy McBrayer had a life-altering run in with a doctor through the program.

“The doctor was like, ‘I know you… I pumped your stomach last year,'” said McBrayer. “And that was something I blocked from my memory.”

McBrayer worries this bill’s three strike policy will not give future juveniles the same opportunity she had to keep a clean record.

“There’s a lot of kids, and a lot of adults I know that three strikes would have been too many. And it would have affected them for the rest of their lives.”

Law enforcement across Sarasota and Manatee counties adopted civil citations as far back as 2014. And while arrests have gone down, teen court referrals have also dropped drastically.

It’s a troubling change for several Sarasota teen court leaders such as Stefan Campagna. He believes officers are choosing warnings over the paperwork of a civil citation.

“These officers don’t want to be off the street, off their patrol, for however long it takes–the hours it takes to fill out that documentation,” said Campagna. “They’re either going to let the child go and he doesn’t receive needed services and re-offends, potentially much more severe this time… or, congratulations, this is your first time and now you’re a juvenile defendant.”

Plus, only a dozen misdemeanors could make diversion programs too exclusive.

“The difference between felony theft and a misdemeanor theft is a dollar,” said Campagna.

Campagna and others don’t doubt the bill’s good intention and believe there’s a solution out there. However, they say we just need more time to find it.