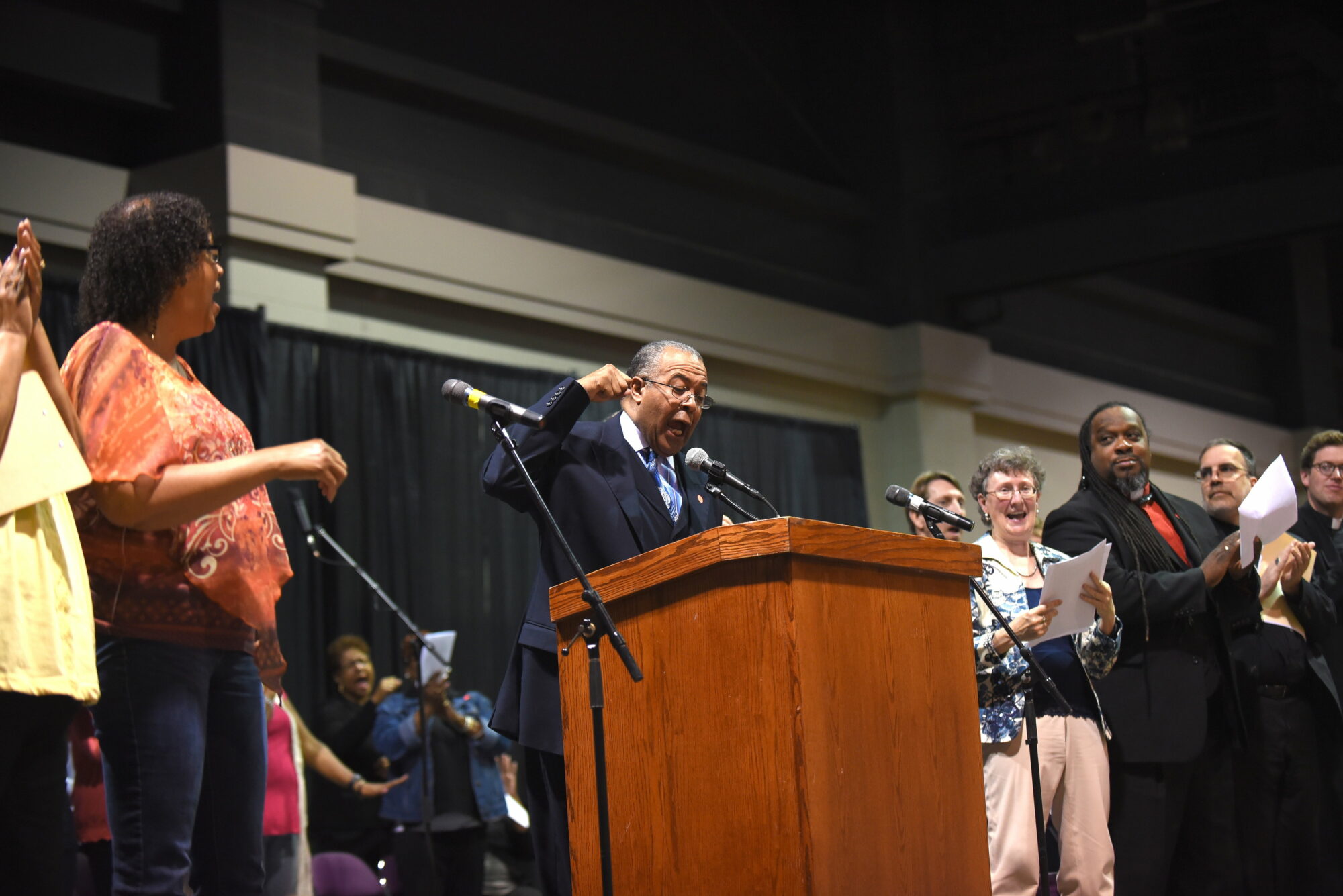 A Lexington interfaith coalition is asking city leaders to contract with a national organization to try to reduce violent crime in the city.

At its annual Nehemiah Action Assembly Tuesday night, BUILD was prepared to ask that a city representative attend a conference of and advocate for a contract with the National Network for Safe Communities.

However, neither the mayor nor any of his representatives attended the meeting, which brought 1,800 people from 26 local churches to Heritage Hall.

BUILD, or Building a United Interfaith Lexington through Direct Action, attempts to hold public officials accountable for working toward social justice in areas such as affordable housing and drug treatment. The group is currently focused on reducing violence and increasing access to mental health services.

BUILD wants the city to contract with the National Network for Safe Communities to bring evidence-based practices for dealing with violence to Lexington.

“Each and every shooting death is a tragedy,” Sherry Warsh, of Consolidated Baptist Church, told the crowd. “The problem is getting worse, not better.”

BIULD hosted an informational session with leaders of the safe communities network last week. The network’s Group Violence Intervention strategy involves having police, community members and social services partner to meet face-to-face with people in “street groups” to deliver an anti-violence message, give notice about the consequences of more violence and offer help to people who want it.

In a letter explaining that city officials would not be attending the Nehemiah assembly, officials said in a letter to BUILD that Mayor Jim Gray has made public safety “his first priority.”

The letter said the mayor’s proposed budget provides for hiring 30 more police officers, six safety officers and a director for the One Lexington initiative “to coordinate among those in Lexington who work to address the root causes impacting community wellness and safety.”

After last week’s session with BUILD and Safe Communities network leaders, city leaders said they consulted with an Eastern Kentucky University professor, Vic Kappeler, about the feasibility of adapting the network’s model in Lexington. It was his opinion that the model is best suited to cities with “very specific violent crime problems, and it is questionable as to whether Lexington is one of those cities,” the letter states.

They letter also says it was Kappeler’s opinion that Lexington police are either already doing or could do many of the things the network recommends.

“We thank you for your passion and conviction in addressing challenges our city faces. And while tension can be a healthy ingredient for open democracy, we believe that working together, without hardline demands, gives us the best chance to succeed,” the letter states.

Lexington’s homicide rate last year was the highest in 15 years, with 24 people killed, nearly all of them with guns.

Bryna Reed of Faith Lutheran Church said the NNSC’s strategy involves “reconciliation” between police and communities and targets the small number of people who are “creating havoc.”

The strategy has been implemented in cities across the country and has been shown to work, she said.

“It is shocking that our officials won’t even explore what is considered nationwide the gold standard of policing strategies,” The Rev. John List of St. Peter Catholic Church told the crowd.

List urged those at the meeting to flood the mayor’s office with phone calls, referencing the plagues that the Bible says were visited on the Egyptian pharaoh who refused to let the people of Israel go.

“One of the plagues was the thousands and millions of gnats that bothered the pharaoh to no end,” List said. “Let’s be gnats.”

BUILD’s other focus this year is mental health services. The group wants to find a permanent source of funding for the Fayette County Mental Health Court and is pushing Bluegrass.org to increase to 100 the number of people served through its Assertive Community Treatment Team.