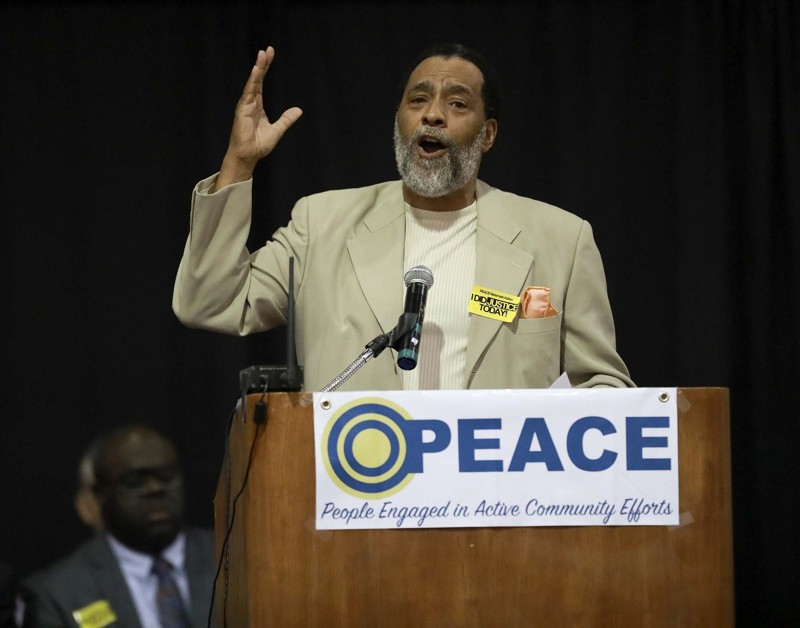 WEST PALM BEACH – The Rev. John D’Mello of St. Patrick Catholic Church in Palm Beach Gardens asked the thousands in the crowd to stand up from their seats if they had ever done something he said as a child.

Run through a parking lot trying to get home late at night? A handful stood up.

Steal a candy bar? A few dozen rose from their seats, some elderly attendees giggling at the memory.

Fought with a sibling? Nearly everyone in the Palm Beach Convention Center stood.

“If you had done those same things today, you all may have been arrested,” he said. “Children make mistakes. It’s part of growing up. What they don’t need is an arrest.”

The issue was one of three highlighted by the People Engaged in Active Community Efforts, or PEACE, during the Action Assembly on Monday evening. The assembly focused on solutions for juvenile arrests, homelessness and alternative identification cards for undocumented residents. The grassroots organization is made up of congregations throughout the county who address key issues and bring ideas to community leaders and legislatures to help the residents.

The group proposed that juveniles charged with misdemeanors should receive civil citations instead of arrests. In Palm Beach County, only the first misdemeanor charge can be a civil citation. The group hopes to expand it to three misdemeanors. The Rev. Robert Rease of St. John First Missionary Baptist in Belle Glade said during their research they found children, as some as young as 8 years old, were being arrested on domestic battery charges for throwing shoes or french fries at a sibling.

Another issue PEACE hopes to address in the county is homelessness. County officials say that since 2015, the homeless population in Palm Beach County is up 11.5 percent. Most who spoke agreed the major issue came down to funding. Their proposed solution is add a designated person to the county government to address the issue and add 300 new beds a year, starting in 2018.

While most county commissioners agreed to do so, Palm Beach County Mayor Paulette Burdick said that as officials figure out the budget for the year, she doesn’t know if she can promise to do that as they also look for solutions with the opioid epidemic in the county.

“There are homeless boys and girls,” she said acknowledging the issue. “But there are people dying every day (from overdoses).”

After success working with the Palm Beach County Sheriff’s Office to accepted consular identification in place of a driver’s license, PEACE hopes to help thousands in the county whose native countries do not have consular ID’s by making county identification cards. To do this, they said they must get OK from law enforcement to accept the cards and then have someone make them.

The Rev. Nestor Rodriguez said accepting these ID’s will help ease the minds of those who are afraid of either getting arrested or deported for not having proper identification. He said this is added fear on top of “recent immigration changes coming from Washington.”

The Rev. Gerald Kisner of Tabernacle Missionary Baptist Church in West Palm Beach said it’s one thing for people to preach or read or complain about injustices, but it’s their duty to come together and fight for them.

“Our undocumented brother and sisters deserve to live without fear and everyone is entitled to a roof over their heads,” he said. “We know the problems in this community as tears, not just statistics.”