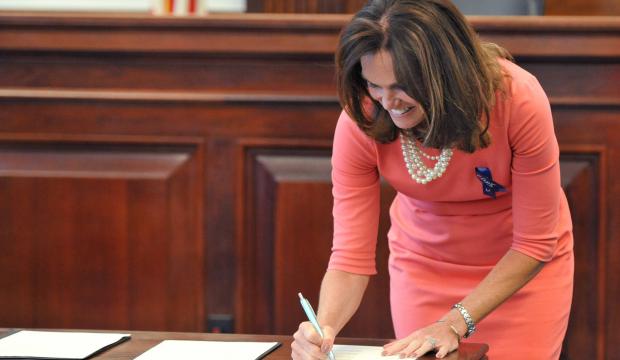 The use of civil citations, an alternative to arrest for juvenile misdemeanor offenders, is expected to expand in Duval, Clay and Nassau counties, as the leaders of 22 agencies, including law enforcement, child services and the judicial system, signed on to an agreement for new rules.

There are two points at the crux of the changes: more misdemeanor offenses — including battery and resisting an officer without violence — can now be handled with civil citations, and prosecutors will no longer review citations before kids can enter diversion programs, which sometimes delayed the process by as long as a month.

Nelson said these guidelines will promote uniformity across the circuit while helping the process work more swiftly. She called the new agreement, which has been in the works since January, a “win for smart justice.”

“The reason this works … is that the kid is quickly placed in front of a neighborhood accountability board or teen court, and so the punishment, the sanctions are swift,” Nelson said. “That hang-up mitigates that outcome. So we said, ‘Why are we doing that? We don’t need to be in it.’ … We took ourselves out.”

Instead of going through the traditional court process, kids are given sanctions like community service hours, counseling and writing letters of apology and essays. In Duval County, the cases are handled by either teen court, where a jury of peers hands down the sanctions, or through neighborhood accountability boards, where a panel of community members doles out similar sanctions.

Statewide, civil citations have the lowest recidivism rates of any program monitored by the state. The statewide average for civil citation programs is 5 percent, compared to 10 percent for arrest followed diversion.

For years, Duval County has been among the counties issuing the fewest civil citations, with one statewide report pointing at Duval, Hillsborough and Orange for together arresting 3,000 kids who could have avoided handcuffs.

Statewide, about 52 percent of eligible cases in the last year were handled with civil citations, according to the Department of Juvenile Justice. In Dade County, 95 percent were dealt with using citations, and 93 percent in Pinellas County.

But in Duval County during that time frame, only 32 percent did.

Since taking office in 2015, Jacksonville Sheriff Mike Williams has worked to expand the use of citations issued by his officers. These efforts included training lieutenants and sergeants, and increasing oversight of why officers issue or do not issue citations.

“We even uncovered internal processes that were cumbersome and stopping officers from issuing the citations,” Williams said. “The printers in the car, we discovered by chance, would not print the citation. We never knew that. … Actually, we could not fix the printer, so we just ordered books to write the citation out.”

Williams said doing those things allowed the Jacksonville Sheriff’s Office to issue citations in 83 percent of cases that were then considered to be locally eligible, up from 9 percent previously. Williams wants to get that number to 90 percent by next March.

However, through the Florida Sheriff’s Association, Williams and his department did oppose legislation that would have mandated the expansion of civil citations to all eligible cases.

“You can’t write in a policy, a MOU, a four- or five-page document, something that’s going to cover every situation,” he said. “You have to give the officers discretion.”

On the campaign trail last year, Nelson said she would discontinue former state attorney Angela Corey’s policy of not allowing civil citations to be issued for misdemeanor battery and would instead give law enforcement the discretion of when to use civil citations in instances of “schoolyard fights.”

State law makes a certain list of misdemeanor offenses eligible for civil citations instead of arrest, but also gives local jurisdictions the authority to implement citations as they see fit. Corey used that flexibility to then send many battery cases to her own program, which she called “at-large diversion.”

It was a decision that placed Corey squarely at odds with many in the community, including the Interfaith Coalition for Action, Reconciliation and Empowerment, or ICARE, Duval Schools Superintendent Nikolai Vitti, then-public defender Matt Shirk and a number of non-profits and advocacy groups that serve children.

Though no one mentioned Corey by name, it was frequently alluded to that the changes finalized on Wednesday could not have happened if she had won a third term in office.

“A lot of scars, bruises, from the political battles linked to the need for civil citations — especially for batteries — with the former state attorney,” said Vitti, who is soon departing for Detroit. “It’s a proud day. It really is. I think it speaks to the opportunity for Jacksonville to continue to move in a progressive direction and think differently about violence and crime. You’re not just talking about consequences, but you’re talking about prevention and problem-solving.”

Advocates in the audience were pleased with the change, with many hugging Nelson and thanking Williams. ICARE has been advocating for civil citations for about nine years, members said.