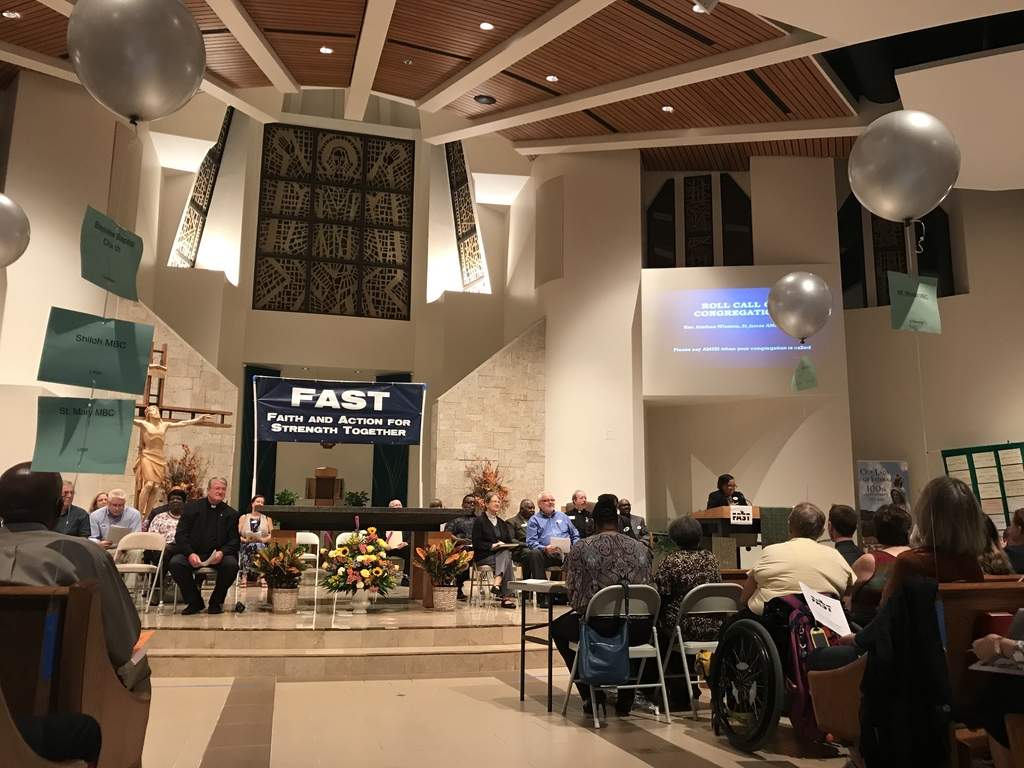 ST. PETERSBURG — One of Tampa Bay’s largest religious organizations has decided to make reforming the juvenile justice system one of its top priorities for next year.

Hundreds of members of Faith & Action for Strength Together (FAST) voted overwhelmingly Monday night to make “youth concerns,” including crime, their greatest worry in the community.

The organization, made up of several local congregations, has advocated for juvenile diversion programs before. But Pinellas County’s teen car theft epidemic, religious leaders said, has left them more worried now than ever.

FAST leaders vowed to devote the next six months to pushing for a bill to expand civil citation programs for youthful offenders across the state.

Many kids, Hazley said, could be turned away from crime before they do something as serious as steal a car. Civil citations could keep them out of a system that brands and socializes them as criminals. Instead, he said, they should be given the resources to escape that fate.

The Tampa Bay Times has documented the auto theft crisis in its yearlong “Hot Wheels” series, reporting that in Pinellas County more juveniles are arrested for car theft than anywhere else in Florida. The crime threatens the entire county with near-constant danger — children here routinely crash stolen cars, and eight teenage auto thieves from Pinellas have died in the last two years alone.

But members of FAST said that law enforcement and legislators’ response to date — primarily arresting more kids and toughening the law for the worst offenders — cannot be the only solution.

“Because we don’t provide children with enough hope, they feel desperate and alone,” said Rev. Jean Cooley, from Good Samaritan Presbyterian Church in Pinellas Park. “Our position (at FAST) is doubling down on prevention.”

Cooley said diversion programs and civil citations can help children who get into fights at school or commit petty crimes when they’re young avoid more serious offenses later in life.

The Times used police and court records to examine the lives of some of the county’s top auto thieves and found that many came from broken homes and committed lesser crimes before they ever broke into a car.

Hazley’s church is in a neighborhood home to many of St. Petersburg’s young car thieves.

Some parents work at night, he said, and cannot watch over their children, who look for fun after hours, when little is available for them to do around Midtown. The FAST commitment, he said, shows children that people are dedicated to giving them second chances and a better future.

“It shows them that we’re just not ready to kick them to the curb,” Hazley said.

Judi McGinity’s son was a recipient of such a second chance. When he was a teen, she said, he was caught with friends spraying graffiti on a building in St. Petersburg.

The mother said police gave her son the option of entering a diversion program, which allowed him to keep a criminal mischief charge off his record.

Over six weeks, McGinity said, her son was put through behavioral lessons and other work to correct his course. After that, he has avoided trouble.

“He could have went either way,” said McGinity, who attends St. John’s Episcopal Church in Largo. “He was 14 at the time, which I think is an age where these kids could go either way.”