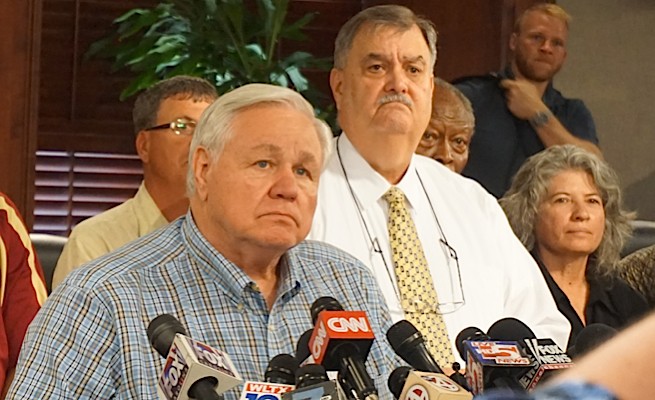 North Charleston City Council unanimously voted to approve a new memorandum of understanding with the Department of Justice, further cementing the federal agency’s step away from collaborative reform with the city’s police department.

To save time, the resolution was bundled with two other unrelated items on the agenda. There was no discussion from the council or audience regarding the new agreement handed down by the Justice Department. The evening’s only public comments came from a man dressed in athletic wear, who seemingly had confused city and county council and alleged that local law enforcement agencies were in league with the “Mexican mafia.”

City Council’s vote comes just over a month after the Justice Department announced dramatic changes to their collaborative reform initiative, leg by the agency’s office of Community Oriented Policing Services (COPS). Following the shooting death of Walter Scott by North Charleston officer Michael Slager in 2015, North Charleston Mayor Keith Summey and Police Chief Eddie Driggers called on the COPS Office to perform a collaborative review of the city police department, which would have ended with a series of reports outlining recommended changes within the department to promote reform and community trust.

In September, the Justice Department pulled the plug on the collaborative reform initiative and has refused to release any of their findings. Under the new agreement given initial approval by North Charleston City Council Thursday evening, the COPS Office will now provide “technical assistance” to requesting agencies, offering resources and developing a work plan based on priorities set by the North Charleston Police Department.

In light of the new arrangement between the Justice Department and the city of North Charleston, members of the North Charleston NAACP, ACLU of South Carolina, Community Resource Center, Charleston Area Justice Ministry, and NAACP Legal Defense Fund have written Summey and Driggers, calling on city officials to join the “growing chorus of residents and elected officials who are demanding the release of the existing NCPD assessment” that began in 2016. Their request comes just days before Driggers is set to travel to Washington, D.C. to meet with Justice Department officials and reaffirm the department’s commitment to the collaborative reform initiative.

“The collaborative assessment the COPS Office is withholding will likely include helpful findings and recommendations that can immediately be deployed to inform NCPD’s policing practices. We urge you to impress this message upon federal officials during your Oct. 30 meeting,” wrote the coalition of partners. “We further recommend that you request that the technical assistance from the COPS Office be consistent with your original request for help. Specifically, the COPS Office should assist NCPD, in concert with the community, with promoting ‘community-oriented policing practices, transparency, professionalism, accountability, community inclusion, fairness, effectiveness, and public trust, taking into account national standards, best practices, current and emerging research, and community expectations.’”

Included in the revised topics for technical assistance offered by the Justice Department are strategies targeting violent crimes “such as those involving gang activity and drugs,” police response to mass demonstrations, officer safety, and training for de-escalation strategies. The NAACP Legal Defense Fund and other local partners continue to allege misconduct and racially biased policing in the community. Now, with little oversight from the Justice Department, these groups are calling on city officials to carry forward with a commitment to the spirit of the collaborative reform initiative.

“Finally, the North Charleston community must be involved in your ongoing request for assistance from the COPS Office. We share your commitment to promoting public safety — yet distrust of police by community members undermines crime-fighting strategies,” coalition members wrote. “Trust and transparency are key, and North Charleston residents simply cannot be left out of police reform and public safety planning processes if the city is serious about finding a path forward. The COPS Office and Justice Department’s professed ‘commitment to respecting local control and accountability’ will ring hollow if the voices of the impacted community — your constituents — are ignored.”