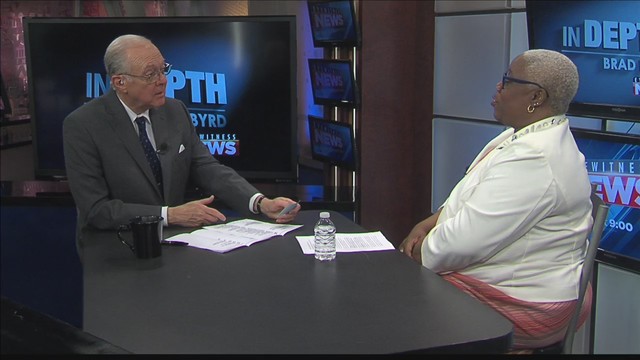 On Monday, May 7, Congregations Acting for Justice and Empowerment (CAJE) will hold its Annual Nehemiah Action. The group meets to discuss what actions need to be taken to solve social issues in our community.

An issue it’s been working on for years is affordable housing and proposing a diversion program offering an alternative to jail-time for people in trouble with the law.

Brad Byrd talks with CAJE co-chair Rev. Dr. Amariah McIntosh about some of the main issues that will be discussed at this year’s Nehemiah Action.

Brad Byrd: “And welcome to In-Depth. A week from today, Congregations Acting for Justice and Empowerment, or CAJE, will hold its annual Nehemiah Action. The group meets to discuss what actions need to be taken to solve social issues in our community. An issue it’s been working on for years is affordable housing and proposing programs that offer an alternative to jail time, offer help for people who have been in trouble and are begging for help. I’m joined tonight by Reverend Doctor Amariah McIntosh, a co-chair of CAJE. Dr. McIntosh thank you so much for joining us. 22 congregations trying to make a difference. You are focusing on helping those well, who often end up in jail. This is not, though, a simple problem. It’s a people problem. It knows no socio-economic demographics.

Brad Byrd: “Tell me who’s affected by this as far as the number of people who need help in this community.”

Rev. Dr. Amariah McIntosh: All those who have a family member or themselves, who end up in the criminal justice system upon their release from the system need help and assistance to reacclimate back into society to find housing, to find employment, to get medical help and assistance when needed and often without the help of others and agencies in our communities. It’s just not available to them.”

Brad Byrd: “Many times this is a mental health issue, too.”

Brad Byrd: “And, you know, there have been law enforcement officials saying our jails are not equipped to help those who have mental health issues. And it also, the families affected by this. By the way the system is set up. It’s often, you told me, it’s a technical problem… that is the reason many end up back behind bars. Tell me about that.”

Rev. Dr. Amariah McIntosh: “Well, we’re dealing with two components of the problem – the mental health piece comes because there are not adequate resources in our communities to deal with those who have mental health crisis. And often when problems happen because of those breakdowns, when they call 911 law enforcement shows up first. And because there’s no place else to take them, some may take them to the Emergency Rooms, but the Emergency Rooms are not equipped to handle it either. So they end up going into the jails. And right, the jails are just not equipped to deal with those who are dealing with mental health issues. We saw, just a few months ago, about the gentleman who was shot down at the federal courthouse who was having a mental health issue and was not able to get the kind of help and resources that he needed even though his family had been begging for years.”

Brad Byrd: “And often the way Section 8 housing is set up and this is not just a low income problem.”

Brad Byrd: “And not just a poverty issue. This transcends to much higher income folks and because of that, in some cases because of these technical issues, one number that you documented was, uh, sometimes 200 of 500 prisoners in our jail may end up behind bars. 200 …”

Rev. Dr. Amariah McIntosh: “That’s how bad it is.”

Brad Byrd: “Okay, let’s see here where there is hope here and what CAJE is doing. I’m told that Evansville is very very close to getting a crisis intervention center.”

Rev. Dr. Amariah McIntosh: “Yes, crisis stabilization unit. Some of our CAJE leaders and city and county officials traveled to San Antonio, Texas in 2016. The city of San Antonio has addressed the problem, and they have a crisis stabilization unit where those who law enforcement encounter who have mental health breakdowns are taken there where they are given treatment, they are diagnosed, and given the proper resources and assistance to help them with the crisis rather than to send them to the county jails.”

Brad Byrd: “And it takes money. Now, I know that the City of Evansville has been dedicating funds particularly Aurora I believe, but the county … you’re going to be really addressing county leaders next week who will be there.”

Rev. Dr. Amariah McIntosh: “Yes. Now, the Aurora is not dealing with the mental health.”

Rev. Dr. Amariah McIntosh: “Of housing. Yeah, because we learned in our research of what are the biggest barriers to successful reentry and locating safe and affordable and accessible housing was a more prohibitive barrier than finding employment.”

Brad Byrd: “And the reason it’s so critical about the funding, case managers are really on the front line of this.”

Rev. Dr. Amariah McIntosh: “Yes because those are one of the conditions often of their release is that they often have to be in secure housing.”

Brad Byrd: “And that is easier said than done in Evansville.”

Rev. Dr. Amariah McIntosh: “It is because sometimes even going back to families may not always work out as intended, and so Aurora has received grants from the state as well as some funding from the city to help find housing. And the vouchers help pay up to 70 percent of the rent for the housing.”

Brad Byrd: “The Nehemiah Action is next Monday.”

Brad Byrd: “And it’s going to be a packed house. Where will that be?”

Rev. Dr. Amariah McIntosh: “It’s going to be at the Old National Events Plaza. Sign in begins at 6 o’clock. Meeting begins at 6:30 p.m. Our goal is to have 1,400 of our congregations and friends and family present.”

Rev. Dr. Amariah McIntosh: “And government leaders. It is the largest civic gathering of its kind in our area that we address these issues. We invite our public officials to be present. We have already listened, researched, and proposed solutions. And we ask our public officials to say ‘Yes’ to the solutions that they are equipped with the power and the ability and the resources to make happen.”

Brad Byrd: “And these will be outlined in detail next Monday.”

Brad Byrd: “Dr. McIntosh, thank you so much for joining us tonight. We could talk about this all night.”

Rev. Dr. Amariah McIntosh: “And before we leave, here’s your ticket. If you don’t have to be on the air, we would love to have you and the audience to see us in action.”

Rev. Dr. Amariah McIntosh: “You can pass that ticket on to someone else.”