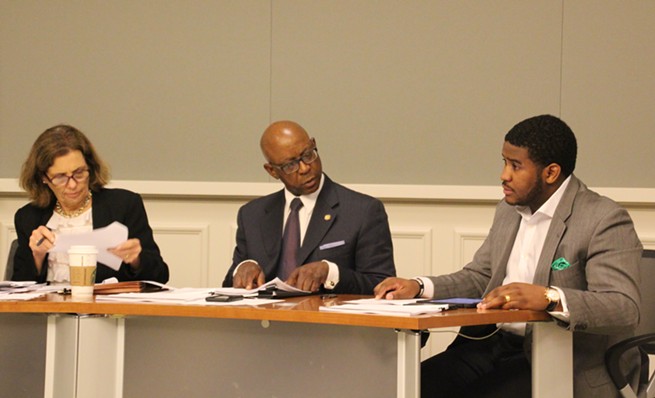 City officials amended a document outlining recommendations for an upcoming audit to determine whether racial bias plays a part in Charleston policing practices at a sparsely-attended public meeting Wednesday morning.

Members of the ad-hoc police audit committee updated a scope of work proposal written by the Charleston Area Justice Ministry (CAJM), a local social justice advocacy group made up of 28 local congregations and organizations.

City staff will finalize the changes made on Wednesday and e-mail them to committee members for a final vote by the end of April. Afterwards, firms will submit bids to assess race relations between the Charleston Police Department and the community it is charged with serving and protecting.

The meeting this morning, held on the anniversaries of the deaths of civil rights leader Martin Luther King, Jr. and Walter Scott, was open to the public, but only about a dozen people attended. King was gunned down 50 years ago today while in Memphis, Tn. to support striking sanitation workers and Scott, a black man, was shot in the back by a white North Charleston police officer as he fled a traffic stop in 2015. Scott was unarmed.

The City of Charleston posted notice of the meeting online less than a week before it took place, though some members of CAJM have said they were notified earlier last week.

Line items from comparable scopes of work in other cities were considered in updating CAJM’s draft, along with language from the Department of Justice abandoned review of the North Charleston Police Department and text from Novak Consulting’s proposal.

City Council voted in November to eliminate a police department audit from Novak Consulting’s contract amid concerns from activists that the firm was not qualified enough for the job.

The language of CAJM’s proposed scope was edited to be more clear and specific. City lawyer Susan Herdina pointed out a sub-clause that appeared to recommend public input in the hiring of individual police officers. It was re-written, despite CAJM members stressing that the details were merely suggestions for the firm who receives the contract and not a final recommendation.

Deputy police chief Naomi Broughton said she was worried about a provision that granted the chosen firm access to all police department personnel records. It was amended to grant the auditor access to disciplinary records consistent with state and federal law.

Working through a particularly tough edit, Shahid emphasized the importance of getting the scope right before a firm is chosen.

“Words are important, and I think that’s why we’re spending so much time on this,” he said.

Councilman Waring shared his own experiences with racially-motivated stops.

“My wife and I were stopped in North Charleston in what I call a pretext stop,” he said. “We were let go. Matter of fact, I felt sorry for the very young police lady that stopped us. When that was found out by our police department, it was discounted like it didn’t even happen.

“What we’re trying to do is be proactive, not wait until something like Sacramento.” he added, referring to the fatal shooting of an unarmed 22-year-old Black man by police officers in Sacramento, Calif. on March 18. “We can learn some best practices to help our police department be a little better.”

Cooper, the city’s procurement director, said that he hopes to find a company to take over the audit by July.

“I’d like to leave [the bidding] out at least 30 days, because you want good proposals,” said Cooper, the city’s procurement director.

“This is the first time that I felt that CAJM was given the due respect,” said CAJM member Suzanne Hardie. “Because we did the research.”

“The audit doesn’t fix it,” she said. “It’s going to be left up to City Council, the mayor, and the citizens in this community to make the changes that are necessary.”