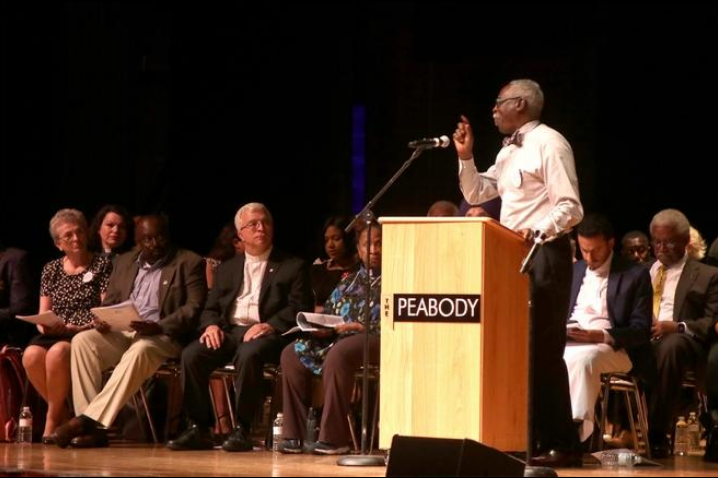 Hundreds and hundreds of eligible Volusia children would no longer be arrested for minor offenses when new legislation justice officials agreed to support Monday night makes it mandatory to issue civil citations instead of handcuffs.

“It’s huge,” said Chris Hoffman, co-chair of F.A.I.T.H. and pastor at Our Lady of Hope Catholic Church in Port Orange. “The state statute prior to this year allowed civil citations to occur but it was not mandatory. The new legislation is going to expect that every eligible child would receive a civil citation.”

Chitwood and Capri actually have pledged in the past that they would issue civil citations but other municipalities were not complying with the agreement, Hoffman said.

“So this memorandum of understanding by the state attorney hopefully will then allow other municipalities to get on board and make sure that civil citations become the norm for all of our kids,” Hoffman said.

A huge number of children will benefit since civil citations allow a child to get some punishment but without an arrest record negatively affecting their potential for a great future, Hoffman said.

In the 2016-17 school year, 340 felony or misdemeanor arrests were made of students in Volusia County schools, Florida Department of Juvenile Justice records show. Deltona Middle School showed 37 arrests, the fifth-highest figure in the state. The records also indicate that while 15.75 percent of Volusia County students were black in 2016-17, 45 percent of those arrested were black.

“We heard that several hundred children will now will be able to receive the civil citation that would have otherwise gotten arrests and that’s every year going forward so that’s huge numbers of kids that will be saved,” Hoffman said.

The memorandum of understanding will eliminate arrests so the children’s potential to attend college, military school, barber school or nursing school will not be ruined, he said.

“So that’s what we are really doing. We are helping kids that we will not ever meet have a great future that they might be limited in having if they have gotten arrested,” Hoffman said.

Under the memorandum of understanding, students accused of offenses involving weapons or sex crimes would not be eligible for civil citations.

Larizza said the State Attorney’s Office has also agreed to handle the issue of restitution.

In pledging his support, Larizza reassured the audience of at least 1,800 that the people who work in the justice system are committed to make the civil citation system work.

“I want you to know that everyday these folks are striving, striving to make your community and the state of Florida a better place, a more compassionate place and a place where we can help our kids become the leaders of tomorrow,” Larizza said.

Chitwood shared that as part of the agreement he would like to see a Juvenile Assessment Center in Volusia County where services are available to juveniles — such as mental health and substance abuse — to address their behavior issues.

“We’ve needed it for years and years and you’re the folks who can help push county government to make that happen,” Chitwood said.

Capri challenged members of F.A.I.T.H. to also have input about helping improve the behavior of youths, saying that he has been working with children for 30 years.

“I think all kids deserve a chance,” Capri said. “I’ve been doing this, working with kids, long before F.A.I.T.H. existed.”