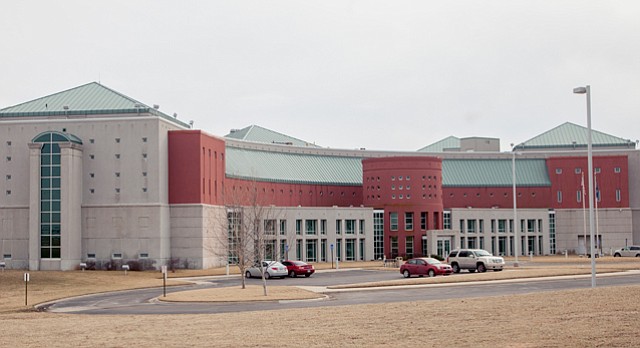 According to the Douglas County Clerk’s Office, 25,880 ballots were counted. Fifty-three percent were “no” votes, and 47 percent were “yes” votes.

After the measure’s defeat, however, members of the Douglas County Commission said they would start considering how to move forward with the jail project in the 2019 budget deliberations that begin in June. Before that process starts, commissioners said they would hold a meeting at 6 p.m. on May 30 at the Douglas County Courthouse, at which the public would be invited to share opinions on how the county should proceed.

Commissioners maintained Tuesday evening, however, that the jail project would go on despite Proposition 1’s failure, although they’ve also said any expansion would have to be done in phases. That could mean cutting spending in other areas and raising property taxes to save money to pay for phased jail improvements on a cash basis.

“We’ll let the dust settle and then listen to what the public has to say, but the needs will still be there,” County Commission Chair Nancy Thellman said.

Commissioner Mike Gaughan said the vote reflected how Proposition 1 split the community. He, like Thellman, emphasized that the problems at the Douglas County Jail would continue despite the ballot question’s defeat.

“Regardless of the vote, the needs are still there,” Gaughan said. “We may have to adjust the size and scope, but we have an obligation to our staff and employees to provide a safe facility at the jail.”

Thellman said she could not put a finger on a single reason for the ballot question’s defeat.

“We were asking for a lot, and it was a complex proposal with a lot of moving parts,” she said. “It could have been the jail expansion, the sales tax or that the tax didn’t sunset.”

Thellman said a question to only fund the behavioral health campus and programming would have won approval, but that was never an option because the County Commission’s central concern was addressing needs at the jail. Proposition 1 offered the best way to take care of jail needs while providing a way to address critical behavioral health needs in the county, she said.

“Based on phone calls I received, a lot of people thought a ‘no’ vote would end any jail expansion and stop any tax increase,” she said “I think there will be a lot of disappointed people when they find out that isn’t the case.”

Sheriff Ken McGovern, who last fall urged commissioners to advance a ballot question for the jail expansion, declined to comment on the referendum’s results.

The County Commission agreed in January to put Proposition 1 on the ballot after four years of study on jail and behavioral health needs. Driving the proposal to add 178 beds to the jail was a consistent overcrowding of inmates at the 186-bed facility. The sheriff’s office has been housing from 50 to 80 inmates per day in the jails of other counties, at a cost of more than $1 million per year. That number of “farmed out” inmates has stayed consistent despite the county introducing reforms like no-bond pretrial release, home arrest and a behavioral heath court.

The jail expansion was controversial before commissioners approved putting Proposition 1 before voters. Four groups came together — the faith-based activist group Justice Matters, the Lawrence chapter of the NAACP, the social justice group Kansas Appleseed and the taxpayer watchdog group Lawrence Sunset Alliance — to form the Jail No coalition. Members of the coalition expressed a variety of concerns, including that the county didn’t have a good understanding of why jail populations had risen, that the county hadn’t given enough time for new jail diversion programs to work and that minorities are overrepresented in the jail’s population. Opponents also criticized the county for using one ballot question to seek approval for a sales tax that would fund both the jail expansion and a significant amount of new mental health programs.

Many opponents expressed support for the mental health portion of the proposal, which included plans for a 20,000-square-foot crisis center with sobering and detoxification units, transitional housing for those with behavioral health issues and $5.1 million in funding for new mental health services.

Ted Mosher, co-president of Justice Matters, said in a statement released after the final vote tabulation that the group wanted to see safe and effective criminal justice reforms and alternatives to incarceration put in place before any beds were added to the jail. He also called for a ballot question for a behavioral health campus to be put before county voters in November, and said county leaders and residents should have a conversation about the “unjust tension between property and race and our legal system.”

“Rather than pitting mental health advocates and criminal justice reformers against each other, we believe that fully embracing all three of these things will make our community stronger and bring us together,” Mosher wrote.

Patrick Wilbur, treasure of the Lawrence Sunset Alliance, said he was encouraged the County Commission had scheduled a meeting to listen to the public and was optimistic it would lead to new ways to address the jail needs.

“I was hoping they would move in that direction,” he said. “It was a pretty solid response from the voters. It’s a message to the county from the voters, at a minimum, (that the county should do) this a different way. Open up the process again and restart the discussion.”

The momentum from the Proposition 1 campaign would ensure a continued community discussion, said Benet Magnuson, executive director of Kansas Appleseed.

“The discussion that has started in Douglas County and all the work that has begun here is a movement, not a moment,” he said. “It is energizing to see so many residents really engaged with some of the problems facing of criminal justice system in the county. We encourage everybody to continue work for reform of our criminal justice system to to make sure we can be a leading example for our county.”

Douglas County Clerk Jamie Shew said 25,890 ballots, or 41.32 percent, of the 62,651 ballots mailed April 24 to registered county voters were returned. There are a handful of military and provisional ballots yet to be counted.