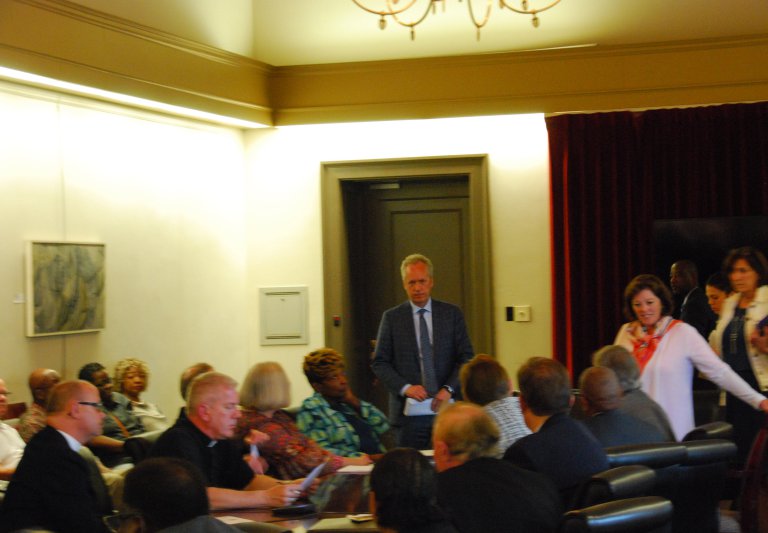 In a years-in-the-making meeting with community faith leaders Friday afternoon, Mayor Greg Fischer pushed back on their demands for an independent evaluation of how the Louisville Metro Police Department applies standard operating procedures in its internal investigations into its officers’ use of force.

Rev. Reginald Barnes, co-president of the religious organization CLOUT, or Citizens of Louisville Organized and United Together, repeatedly asked Fischer during an at-times contentious 30-minute meeting whether the mayor would agree to such an evaluation.

Barnes said that via an open records request with the department, CLOUT had identified 68 cases since 2012 wherein his group asserts that standard operating procedures regarding use of force by LMPD officers did not apply de-escalation tactics in internal reviews of officer conduct.

But Fischer did not commit to such an evaluation, and instead told the group that he would “need to do some homework” on those cases. After conferring with his Chief of Staff Ellen Hesen, he said that his office would provide CLOUT with a response within six weeks.

After the meeting, Barnes told media that Fischer’s decision was a “delay tactic.”

“The mayor’s comment was that he needed more time to study the issue,” Barnes said. “Another six weeks to the study the issue when this issue we’ve been bringing before him, pursued in the media, even in letters, that we’ve already brought before him, so needing another six weeks, to us, is just really another delay tactic. And we don’t think the citizens of Louisville deserve a delay. We need answers, and we need them now.”

Barnes was also surprised that LMPD Chief Steve Conrad and a cohort of police officers were present for the Friday meeting. Barnes said that he had asked Fischer’s staff to keep the meeting — their first in seven years — between them.

“That was a little disappointing to us,” Barnes told reporters. With Conrad attending, “he took up a lot of the time that we wanted to talk to the mayor in regards to this grave and important community issue.”

During the meeting, Fischer replied that because the police were “experts” on the issue, then it made sense to have them there, and urged Barnes and his organization to have “a productive meeting.”

Although the mayor and the faith leader exchanged mutual praise for various efforts — including affordable housing, arrest-diversion programs such as the Living Room and a greater emphasis on drug courts — Barnes criticized what he sees as a huge oversight problem within the LMPD’s implementation of its 21st Century Policing initiative.

The 21st Century Policing initiative is an outgrowth of an Obama-era task force which sought to “identify best practices and otherwise make recommendations to the President on how policing practices can promote effective crime reduction while building public trust.”

But in what he called “police officers policing themselves,” Barnes noted that the plan’s guideline for handling issues of officer misconduct largely dismiss the need for such independent investigations.

In response, Chief Conrad told the group that the LMPD is “committed to doing absolutely everything [it] can” to ensure its officers are properly trained and supervised.

Conrad added that “in those situations where someone lost their life, if there isn’t an opportunity to learn something from that, we’ve made a mistake.”

Barnes then interrupted Conrad, saying that while the chief’s comments were appreciated, CLOUT’s time with the mayor was short. The police chief attempted to reinsert himself into the conversation, but to no avail; he withdrew to a corner of the mayor’s conference room and stood silently with his hands folded in front of his belt.

At the conclusion of the gathering, Fischer said he and his staff would have to review the information on the 68 cases, stressing that solving the issue “is a process” and would take time.

“You’ve raised some questions about those 68 cases or so, and I need to know more about those,” Fischer said. “So we’ll take a look and we’ll respond.”