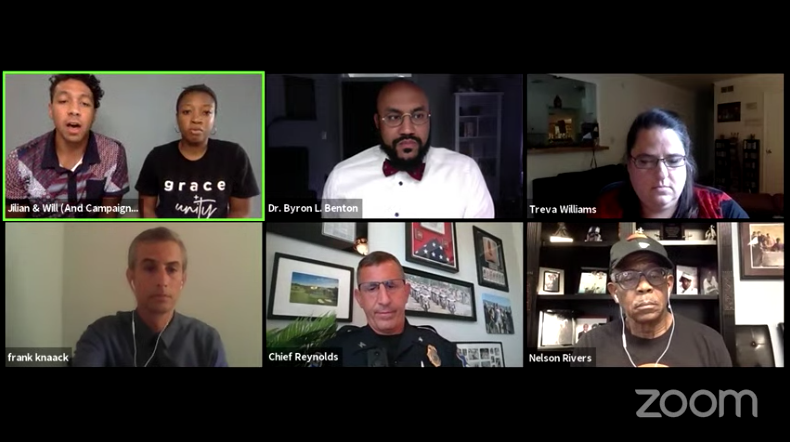 Charleston Police Department participated in a racial justice town hall Thursday evening hosted by the AND Campaign, a Christian social justice organization. The meeting included a racial justice panel discussion with representatives from the Charleston Area Justice Ministry, the American Civil Liberties Union (ACLU), the National Action Network and others.

“Police were always invented for one purpose: to protect property and white people from black people and to keep black people in their place,” said Nelson Rivers of the National Action Network. “Because of that, policing has always been about keeping me down, keeping me invisible or keeping me in my place.”

Charleston Police Chief Luther Reynolds agreed “police have have not always been on the right side,” but pointed to efforts like the Illumination Project as examples of the police trying to change. “I think what we need to do a lot more of is listen and talk less,” he said.

Frank Knaack, executive director of the ACLU of South Carolina, showed concern over recent actions from local police, including a recent expansion of police downtown and officers’ use of crowd-control munitions against citizens on May 31. After riots downtown the night before, police used gas and pepper balls on protesters in Marion Square and Eastside residents who were not protesting. Knaack called on the police to issue an apology and investigation into the actions. “Over the past several years, the City of Charleston has taken steps to demonstrate to the community a concern in racial justice,” he said. “Now is the time to follow these gestures with concrete action.”

The majority of the meeting was dedicated to community questions. Reynolds was asked about the increase in police presence downtown over the last two weeks, answering that he’s heard from communities that they “without exception” want more police. “What I hear from our community is they want to be safe,” he said, citing downtown homicides in recent weeks. “We need to be out in our communities. The number one priority, tier was community building.”

[content-1] Rivers responded to Reynolds’ statements by pointing out that the police increased presence after a white man was murdered.

“It seems like white life matters more than black life,” he said. “That may not be the message but we know about the days came and nobody said, ‘We’re going to get tougher when a black person was killed.'” He encouraged Reynolds to have more black people in the department’s administration.

One viewer asked what the most meaningful ways to help those negatively impacted by an increased police presence. “Ask SLED to go home, pack up SWAT, invite the Sheriff’s Office to go back to the work they were doing and to back track on that decision,” said Treva Williams of the Charleston Area Justice Ministry. “We have a community of people saying, ‘Police are a threat to my safety,’ and yet our response is to increase police across Charleston.”

Reynolds affirmed that he has only heard from communities that they want police in their neighborhoods.

“All [the police] can do is enforce the laws,” he added. “The ones who are making the laws, going behind closed doors and creating these processes that are going to disenfranchise people are the ones who really need to be at this table as well.”

Rivers concurred with Brenton’s message later, saying, “You could have more success if you doubled the minimum wage than if you put another thousand cops in Charleston, but you have to have the courage to call it out.”
View the original story here.