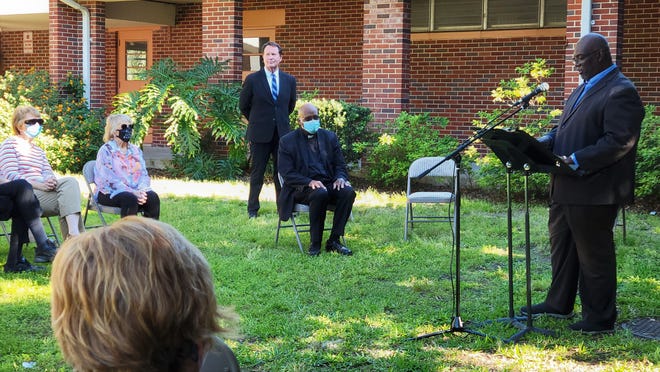 Faith leaders and criminal justice organizations from across the state met virtually Tuesday evening to acknowledge local law enforcement leaders for sticking to an agreement to replace arrests with civil citations for some juveniles.

And they encouraged those leaders to move forward on plans to do the same for adults in communities scattered across Florida, including Duval County.

The meeting, organized by the DART Florida Criminal Justice Collaborative, a collection of 11 independent organizations, and faith leaders in the Interfaith Coalition for Action, Reconciliation and Empowerment — commonly called ICARE — had about 300 attendees.

Several law enforcement officials, including Miami-Dade State Attorney Katherine Fernandez Rundle and Sarasota County Sheriff Kurt Hoffman, appeared via pre-recorded speeches to discuss their civil citation programs. Three people who had been impacted by arrests for nonviolent misdemeanors, such as helping to break up a fight or driving on a suspended license for not paying toll tickets, also told their stories.

“There’s just a much smarter way of doing it that gives incentives for a new opportunity for an adult to correct a mistake that they made,” Moss told The Times-Union. “Because the bottom line is adults make mistakes just like young people do.”

An adult program is still forthcoming. Nelson has said that would need to be “led by law enforcement” and could take more work to develop because “the infrastructure that we talked about that exists for juvenile civil citations doesn’t currently exist [for adults].”

Williams has signed a document with ICARE saying he would work with Nelson’s office to develop a program for adults.

Advocates say it’s sorely needed after the release of 2019 statistics that show almost one-third of adults arrested in Jacksonville were for nonviolent cases.

Beginning in 2017, Nelson stuck by one of her campaign promises to change the way law enforcement and the courts handled crime to allow first-time youths committing nonviolent misdemeanors to enter a diversion program instead of the criminal legal system. Juveniles who successfully complete the program, processed through Teen Court, have no arrest record.

Law enforcement officials in Duval, Nassau and Clay counties, as well as other juvenile justice stakeholders, signed a memorandum of understanding that allows police officers to decide whether to issue a civil citation instead of arresting someone. But if a juvenile is arrested for an offense, the arresting officer must explain why in the police report.

Data provided by the state show that hundreds of children have received civil citations or completed volunteer hours, restitution or programs with local churches instead of entering juvenile detention.

From 2011 through 2016, the years for which data is available online, no children or only one per year was recorded as entering a diversion program instead of being arrested in Duval County.

That started increasing i​​n 2017 and 2018 when six youths were allowed an alternative to juvenile detention, just 5 percent of the total arrested that year.

But by 2019, 81 percent of the 570 minors were given an alternative and in the 2019-20 fiscal year, 79 percent of first-time offenders avoided juvenile detention.

Advocates and researchers say diversion works. According to the Florida Department of Juvenile Justice, civil citations have a recidivism rate of only four percent for those who complete the program.

“We knew what the data said, despite the fact that the previous state attorney wanted to be tough on crime by way of arresting people,” Moss said. “I think the previous sheriff, as well as the current sheriff, have now all embraced this idea that this is a problem you really can’t arrest your way out of because once you start arresting kids, especially for misdemeanor crimes, it just perpetuates the problem.”