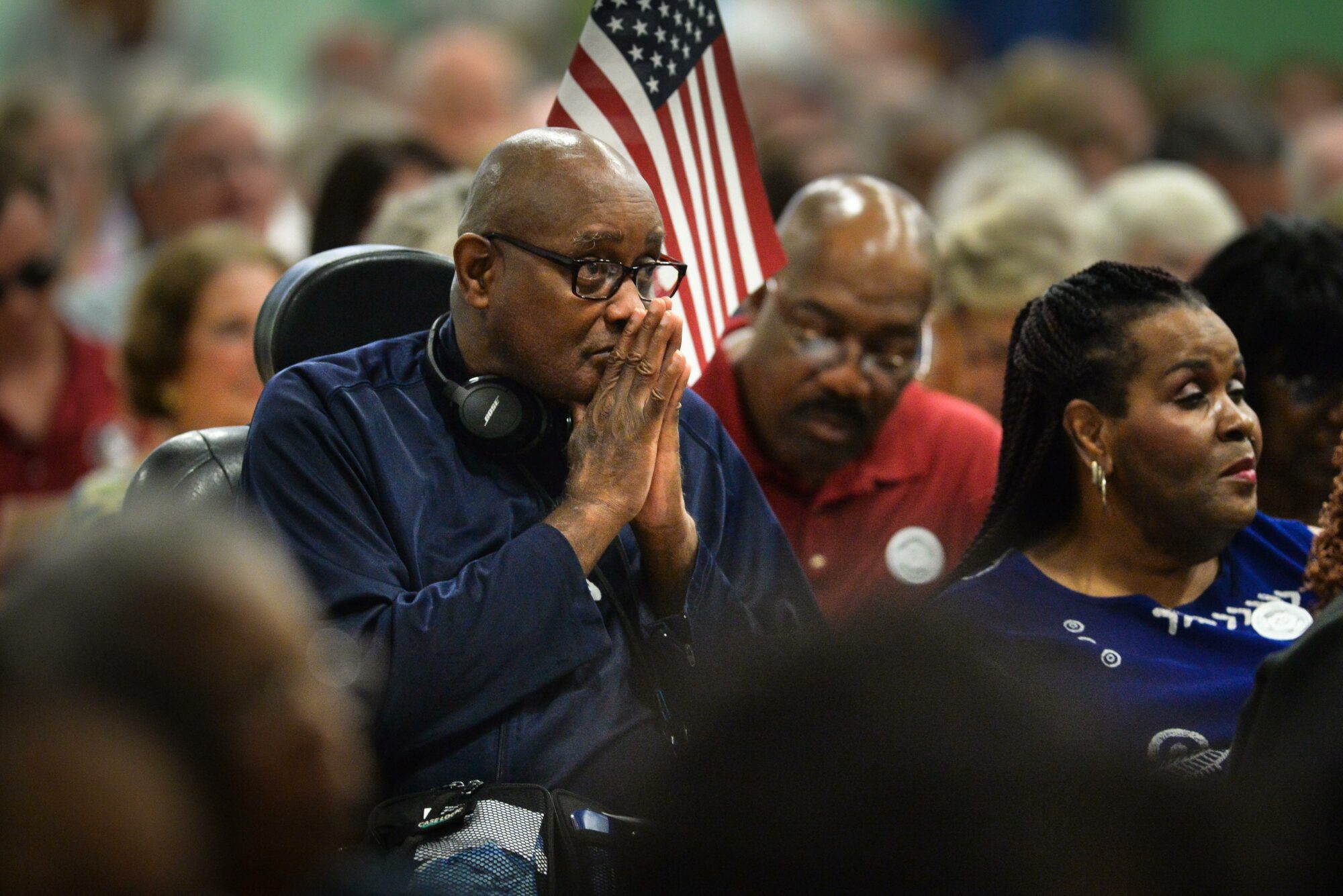 After success with civil citations, group targets other issues

SARASOTA — A program that allows young people accused of minor crimes to avoid arrest had been embraced by Sarasota County law enforcement over the last year.

Now local leaders are part of a statewide push to increase the use of civil citations, which allow juvenile offenders to do community service and face other sanctions rather than arrest.

Sarasota United for Responsibility and Equity — an interfaith coalition of local churches — drew a crowd of more than 900 to the Sarasota Municipal Auditorium to hear about the progress on civil citations, and to try to extract promises from local elected officials and candidates on two other community issues that have drawn significant attention in recent years: affordable housing and the Sarasota County School District’s use of out-of-school suspensions.

The group was successful in getting one county commissioner, two Sarasota city commissioners and two candidates for the City Commission to support its effort to have city and county planners draw up draft language “for new zoning policies strategically designed to increase units of affordable housing for families making less than $37,000 per year.”

Sarasota Superintendent of Schools Todd Bowden also agreed to support a number of actions designed to pave the way for reducing out-of-school suspensions.

On both issues, the commitments were only tentative steps to begin tackling the problems.

But SURE leaders promised to keep the pressure on. The progress the group has made on the civil citations shows how effective SURE can be when it latches on to an issue.

Sarasota County lagged most others in the state in developing such a program. Back in 2014 when SURE began investigating the use of civil citations as an alternative to arrest, no Sarasota law enforcement agencies used the citations. The group began meeting with Sheriff Tom Knight and others. The result has been a 61 percent decrease in juvenile arrests, which can have a lasting effect on future job prospects and other opportunities.

“The program that Sheriff Knight developed in Sarasota County is a model for other counties,” said Laurie Etter, a SURE member who retired to the area after working as a prison minister in Connecticut.

Countywide, 174 out of 255 eligible youths received a civil citation last year, or 68 percent, according to Florida Department of Juvenile Justice statistics.

Now SURE leaders are lobbying for a bill that would make civil citations mandatory throughout Florida for certain offenses.

The legislation is a top priority for Senate President Joe Negron. But it has met with resistance from the Florida Sheriff’s Association and other law enforcement groups, which want to maintain officer discretion to make arrests.

Pushback from law enforcement led House leaders to completely revamp their version of the bill. Instead of focusing on civil citations, the legislation now is centered on automatically expunging arrest records if a juvenile completes a diversion program.

“I don’t think the House will move it if it’s a mandate on law enforcement,” state Rep. Larry Ahern, who is shepherding the bill through his chamber, said in an interview Monday.

Ahern’s bill has been heard in one committee so far and he expects it to keep advancing. The Senate bill also is moving forward.

If both chambers pass a version of the bill they could enter into negotiations to find a compromise. To help prod lawmakers, SURE passed out a sheet of paper to everyone in the crowd with instructions on how to contact key members of the Legislature.

“We need to help it along and that’s where all of us come in,” Etter told the group.

Etter favors the Senate bill, which mandates civil citations for 12 misdemeanor offenses, such as possession of alcohol or small amounts of marijuana.

The Sarasota County Sheriff’s Office instructs officers to issue civil citations for all qualifying misdemeanors. Officers can still make an arrest, but they have to explain their reasoning — such as the suspect not being cooperative — for deviating from the civil citation policy in writing to a superior.

“When officers had discretion we ended up having too many kids getting arrested,” Etter said.

Sarasota County’s change of direction on juvenile arrests has been significant.

Whether SURE can have the same kind of success with an issue such as affordable housing — which has vexed the community for many years — remains to be seen.

The group’s questioning of local officials Monday was tense at times. Some bristled at making firm commitments or offering yes or no responses to an issue they viewed as more nuanced.

County Commissioner Michael Moran refused most of the group’s requests, including the proposal to have county staff write draft language to change the zoning code to encourage affordable housing.

Moran said there’s a need “for this community to have dialogue and discussion, not yes and no answers.” Changing the zoning code also raises property rights concerns, he said.

Commission Chairman Paul Caragiulo went along with the requests. He said afterward that he simply wanted to further the discussion and is not committed to any specific policy proposals.

But Caragiulo, Alpert and Brody all warned that some of the anti-growth sentiment that has been percolating through local politics could conflict with the desire for affordable housing.

“There are forces in this community that don’t want to see more people in it,” Caragiulo said.