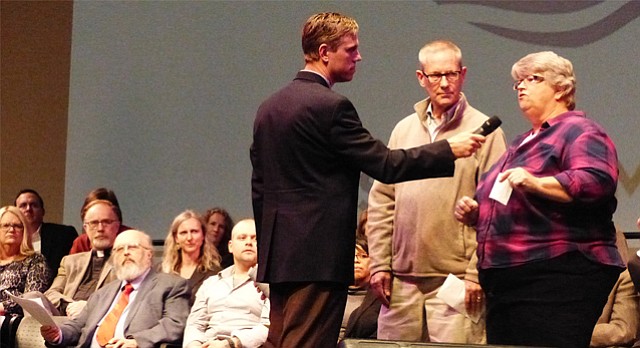 An assembly hosted by faith group Justice Matters on Thursday brought up community issues such as mental health, affordable housing and school equity, and event organizers weren’t shy in voicing their disappointment that not all local leaders attended.

The conclusion of the third annual Nehemiah Action Assembly likely sent cell phones of two local leaders — School Board President Marcel Harmon and Douglas County Commission Chair Mike Gaughan — buzzing with text messages after their numbers were projected in front of the nearly full Lied Center and the approximately 1,500 attendees were encouraged to text them.

“We are not here to vilify anyone,” said Justice Matters member Dennis Constance, who is also a former city commissioner. “We just want the leaders that we elected to hear it from us, eye to eye, how important these issues are to us.”

The main idea of the night was what was referred to as “meaningful action.” As part of the event, members of the local faith group of 21 religious congregations intended to ask local leaders and other officials to make verbal commitments regarding five issues: childhood trauma, mental health services, affordable housing, incarceration alternatives, as well as racial conflict and achievement gaps in public schools.

A statement released by Justice Matters before the event said the group had spent time researching the issues and identified a call to action for each.

“More than just asking the question why, we go about trying to figure out what can be done about it,” said Ted Mosher, co-president of Justice Matters and pastor at Good Shepherd Lutheran Church at the event.

But the two elected leaders who did attend, Vice Mayor Stuart Boley and City Commissioner Lisa Larsen, emphasized that they were not there to make specific promises.

The city allocated $300,000 toward the affordable housing trust in 2017, and its five-year capital improvement plan includes another $300,000 in 2018 and $350,000 per year from 2019 through 2021. Those funding decisions, as well as any future increase in funding, would have to be approved annually as part of the city’s budget process. Both Boley and Larsen said they were committed to addressing the issue of affordable housing, which included identifying funding.

“I’m all on board for seeing dedicated funding, because that’s the way we’ll address this problem,” Larsen said.

County spokeswoman Amy Wooden said that all three county commissioners individually decided not to participate in Thursday’s event. In a statement to the Journal-World, she wrote that the assembly is not an environment where an open dialogue and exchange of ideas and information can take place.

“The Commission will continue to work with a broad range of stakeholders from across the County to find common ground, identify realistic solutions and advance initiatives important to the future of Douglas County, Kansas,” Wooden stated.

When asked about mental health, Lawrence Memorial Hospital CEO Russell Johnson, who was in attendance, said he wanted to work toward improvements.

“Mental health is part of physical health — they’re not separate,” Johnson said. “We would definitely embrace bringing community partners together to find the right solution.”

Though the group acknowledged the school district’s efforts to address racial issues and achievement gaps in public schools, it is also advocating that the school district consider a “restorative justice” disciplinary program. Such a program would provide alternatives to a punitive system and would focus on building relationships.

Julie Boyle, spokeswoman for the district, said that individual board members and school officials had met with Justice Matters members, and that the group has been invited to attend an upcoming board meeting to discuss the proposed program.

Regarding the issue of childhood trauma, group leaders said it was one that affects all the other topics on the event’s agenda.

“There is not a single issue that will come before you tonight that is not affected by adverse childhood experience,” said the Rev. Brian Elster of Trinity Lutheran Church.

The group is advocating for expansion of programs that help identify and counsel adults who have had such experiences, as well the expansion of training and screening programs for children. Professionals from several local health care centers expressed support for the idea.

The evening was bookended by prayers and singing, and Justice Matters members encouraged attendees to continue their civic participation as well.