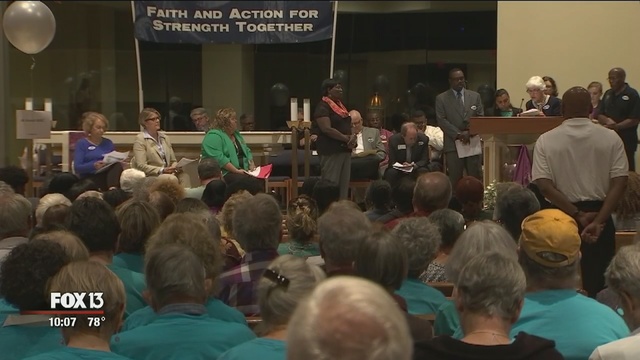 CLEARWATER – A group of religious leaders in Pinellas County says arrests, even for minor crimes, can ruin kids’ futures.

They want to end the cycle before it’s too late, starting in the classroom.

Lorenzo Arscott says it took just one arrest to steal his son’s future.“My son was 14. He was in the park, messing around with firecrackers,” Arscott said. “The police arrested him.”

His son completed a diversion program and was told his record was expunged.

But, three weeks before shipping out the the Navy, he was told a mistake at age 14 would keep him out.

“It devastated him and it put him into a downward spiral where he ended up in jail,” Arscott said.

That’s a story that members of “FAST” or “Faith and Action for Strength Together” want to rewrite.

They say they’re worried about low reading scores at certain schools, too many out-of-school suspensions and high in-school arrest rates.

“9,000 children a year are being arrested in the state of Florida for these minor misdemeanors and when that happens, when they become adults, they can not get jobs or college scholarships,” said Rev. Jean Cooley of Good Samaritan Presbyterian Church in Pinellas Park.

“We are certainly talking about trying to stymie this pipeline to prison phenomenon that starts with education,” said James Myles, and Elder at Bethel Community Baptist Church in St. Petersburg. “If you’re unsuccessful at that level and you start falling behind, you become disenchanted, unmotivated, then you’re going to go to the streets.”

They’re asking the district for more transparency in the form of quarterly accountability reports, from each school, focused on those three issues.

That’s information already already available, according to school board members who were able to attend the meeting.

“It’s difficult to find on the website so I am committed that this semi-annual report be placed on the website with a clear link to it,” said School Board Member Linda Lerner.

House Bill 205 that would expunge a juvenile’s arrest record after they’ve completed a diversion program.

“That’s not how it works at the federal level,” said Kanuck or Unitarian Universalist Church in Clearwater. “All those young people who might apply to the military who might benefit in so many ways from training and citizenship and an opportunity to grow and gain skills, if they’ve got an expunged record, it’s probably going to show up and they’re probably never going to have a chance to serve in the military. The bigger picture is, our country needs the military.”

Thousands of people are expected be there to discuss these same issues, in hopes of keeping young people out of the system.