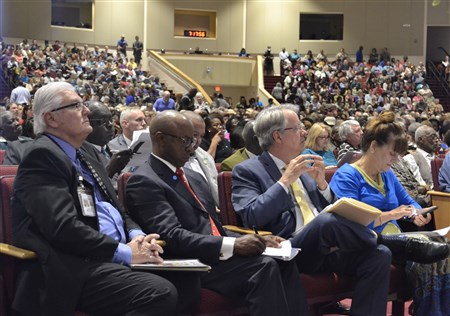 CAJM co-founder Rev. Nelson Rivers, III of Charity Missionary Baptist Church in North Charleston encourages public officials and community members to attend. “God calls us to ‘do justice’ so all who trust and believe God are invited to come stand for justice on next Monday night at Mount Moriah Baptist Church!”,  Rivers said.

This year’s rally will address issues regarding the crisis of racial bias in policing practices and developing programs to reduce the number of arrests and suspensions for African-American students in the Lowcountry.

CAJM Officials were disappointed following last year’s rally as several key North Charleston officials refused to attend the rally at the request of the organization’s leadership. Most notably, North Charleston Mayor Keith Summey refused to attend. In a statement he said previous meetings with the group resulted in rebuke of public officials and chastisement of the police department. CAJM’s tactics and insular views are unavailing, he said.

Invitations were sent out to all public officials again this year hoping to come together to address issues affecting our community. In a letter addressed to City of Charleston Mayor John Tecklenburg, the group asked for his presence at the rally although he is currently scheduled to attend a community input workshop for Area 1 in West Ashley.

CAJM hopes he will make an adjustment to his schedule to make an appearance. “We hope that the mayor prioritizes racial justice in policing practices as much as he does revitalizing West Ashley,” said Rivers. Tecklenburg did attend the event last year.

The Charleston Area Justice Ministry is a non-profit organization that consists of 29 interfaith congregations and organizations across the Greater Charleston area. For more information about the organization visit www.charlestonaresajusticeministry.org