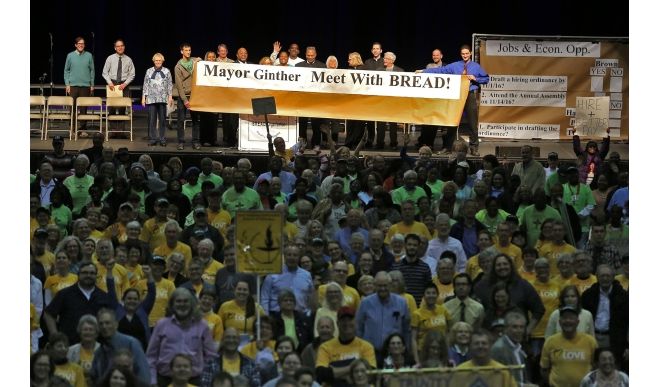 In the years since BREAD has been mobilizing congregations of a variety of faiths to pressure politicians for social justice and fairness in government, elected officials have taken notice, even if they’ve questioned the sometimes arm-twisting tactics.

Columbus Mayor Andrew J. Ginther might soon learn that failing to appear at the annual Nehemiah Action for the group Building Responsibility Equality and Dignity is just as uncomfortable as being onstage before 3,000 people demanding action.

Cathy Levine, of Congregation Tifereth Israel, explained Monday night at the Celeste Center on the state fairgrounds that Ginther had been invited in January to the Monday BREAD meeting, turned down the offer in February and received a flood of calls from congregants asking him why in April.

BREAD wants Ginther to collaborate with neighborhoods to devise a plan for wealth-building strategies, including more worker-owned industries in poor areas such as Linden and the Hilltop. Specifically, the group wants the mayor to appoint a full-time staffer to do just thatin the Department of Neighborhoods by Sept. 1, hold a wealth-capturing summit by Nov. 1, and secure $5 million to finance the efforts within five years.

His boxes to check off commitments on a tote board went empty.But Levine wasn’t done with the mayor.

A banner was unfurled: “Mayor Ginther Meet With BREAD.”

An audience photograph was taken, with some members raising fists and others yelling.

Finally, forms were circulated to be signed by each person in attendance and to be delivered to Ginther’s office.

When asked why Ginther didn’t attend the meeting, spokeswoman Robin Davis said Monday night, “He did have a very busy schedule today.”

The call for “Hire and Better Pay!” was the main issue of the night’s BREAD meeting, and follows a study last year that ranked Columbus the nation’s second most economically segregated large city.

The group did get commitments from other political types who attended, including Franklin County Prosecutor Ron O’Brien, to support a program to create a municipal-identification card. It would be geared toward immigrants, homeless people and others who might have trouble getting an ID, and could be used for business discounts, debit services and the public library.

Other guests, including City Council members Shannon G. Hardin, Jaiza Page and an aide for Elizabeth C. Brown, did agree to draft an ordinance that would give preference to companies bidding for city business if they commit to hire a yet-to-be determined number of people with criminal pasts.

Page asked the audience to bow their heads when explaining her support of the measure.

“We pray that we will have the forgiving heart that you have, to welcome them back into society, to give them jobs and give them a life,” Page said.

The crowd, considered to share progressive views on social issues, also was dotted with conservatives.

“It is kind of cool, seeing all the different faiths come together, joining for a common purpose to try and help their fellow man,” said Jim Reese, a Republican from New Albany. “I think it’s going to take compromise in all of us to make stuff happen.”