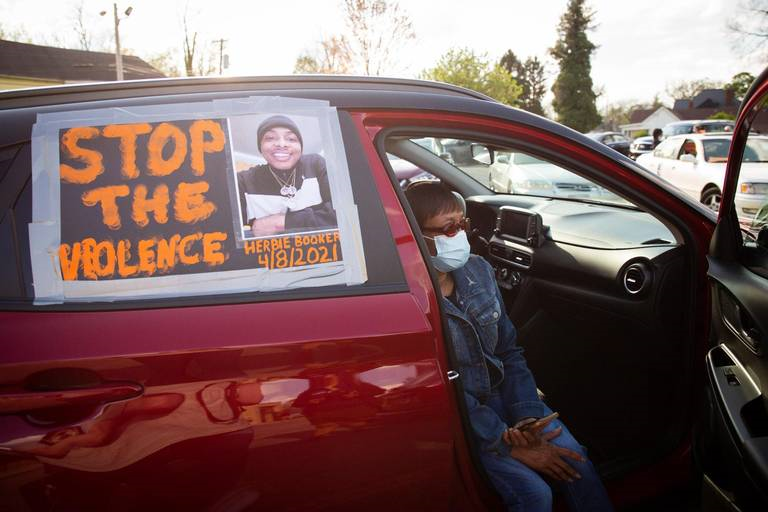 ‘Tired of burying one another.’ Families of Lexington homicide victims rally to end violence

Concerned about a recent spike in fatal shootings, Lexington community members on Tuesday gathered to say they’re “sick and tired of burying one another.”

That was Pastor Joseph Owens’ message as he spoke to other residents gathered in the parking lot outside Shiloh Baptist Church. Lexington has had 15 homicides in 2021, all of which have been shootings, according to police data.

An early spike in shootings this year follows a record-setting year for homicides in 2020. Lexington reported 34 homicides last year. Some of the people at Tuesday’s rally were concerned that violence involving gangs and other groups is a significant contributor to the spike in shootings.

“With one shooting after another so quickly, we know that there is some retaliation that is involved,” Owens said.

Family members and close friends of some recent homicide victims were in attendance at Tuesday’s “Stop the Violence” rally.

Andre Maxberry, whose grandson and nephew both died in Lexington shootings in the past year, said she felt like the city and the police department weren’t doing enough to fully investigate homicides and prevent gun violence.

“I’ve given names,” She said. She said she’s given lots of information to investigators regarding multiple homicides in the city. “ … no arrests have been made.”

Maxberry’s grandson was Mykel Waide, an 18-year-old former Tates Creek basketball player who was set to start school at the University of Louisville before he was killed in what police described as a large disorder with shots fired on Newtown Pike last summer.

Maxberry’s nephew was Lowell Anthony Washington, a 35-year-old from Louisville. He was killed in a shooting inside an apartment on Dalton Court on April 7, according to police.

“I want to see my babies grow up,” Maxberry said. “I don’t want to go and stand over top of them and look at them in a casket.”

She urged people who know about shootings to speak up and share information.

Tuesday’s rally was organized by BUILD (Building a United Interfaith Lexington through Direct-action). BUILD is a group of 26 congregations which focuses on issues of poverty and injustice.

Vanessa Smothers, the daughter of fatal shooting victim Alice Carter, told the crowd Tuesday that she hated to see her innocent 82-year-old mother killed as a bystander to a violent crime.

“She was gunned down by many shooters,” Smothers said. “These shooters did not live in our neighborhood. These shooters started their confrontation somewhere else and they ended up on my street.”

Carter was outside her home on Oct. 22 when suspects in multiple vehicles started shooting at each other, police said. She was shot in the chest and died as a result.

“There was no helping,” Smothers said.

Family friends of Herbie Quintell Booker were also in attendance. Booker was shot April 7 and died after he and another victim tried to take themselves to the hospital, according to police. They crashed while on the way there, police said.

“I don’t know what kind of lifestyle little Herbie had,” said Sherry Warsh, a family friend of Booker who is also a board member for BUILD. “I don’t know. I just pray — the violence needs to stop.”

Warsh and the BUILD organization have advocated for Lexington to begin using a “Group Violence Intervention” program in an effort to stop gun violence in the city.

Group violence intervention is a strategy led by the National Network for Safe Communities. It focuses on deterring violent crime committed by organized groups.

Warsh said she thinks group violence intervention would reduce the number of shootings committed by people involved in gangs, but also cut down gang activity.

“Whether it’s drugs, gangs or whatever, it doesn’t justify them losing their life,” she said.

The National Network for Safe Communities conducted a study in Lexington using police data and found that from 2014-2018, approximately 34 percent of Lexington’s homicides included “group member involvement.” The study also found that violent criminal group members were involved in about 30 percent of the city’s nonfatal shootings from 2016-2018.

Those number were actually lower than what the National Network for Safe Communities typically finds in cities around the country. But the organization was concerned that there were gaps in the information received and used in the study. And local advocates think the percentage would be higher if the study was conducted now.

“For a city our size, these are big numbers,” Pastor Richard Gaines said of Lexington’s shooting data. “… we’re seeking to sound the alarm now to say ‘Hey, we need to intervene now. Time is passing and it’s getting worse.’”

Gaines is the pastor at Consolidated Baptist Church and spoke to community members at the rally Tuesday.

BUILD is asking Mayor Linda Gorton to adopt a gun violence intervention strategy and plans to rally around the issue next week through “Nehemiah Action,” an event scheduled for next week which will further address the issue.