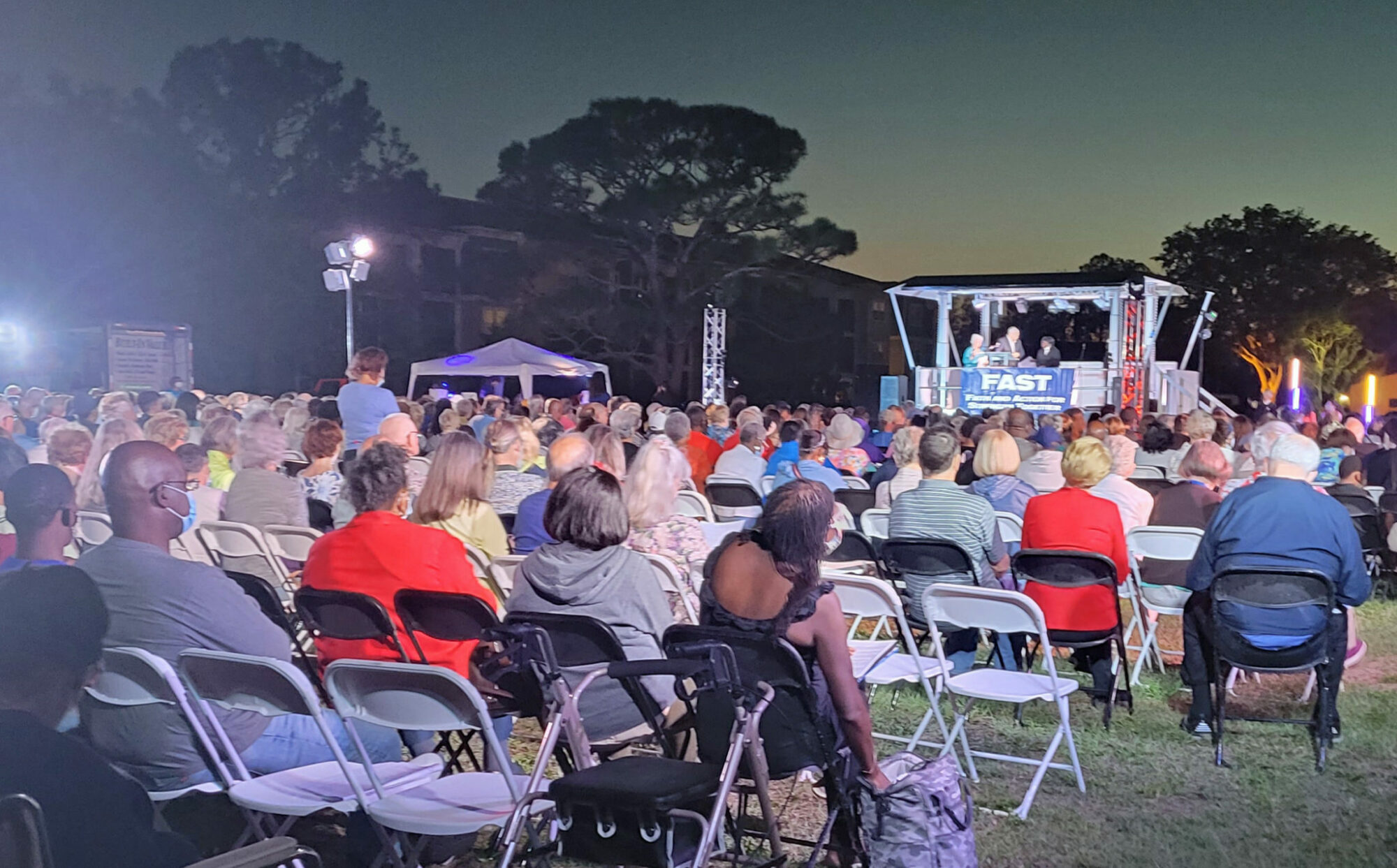 Drawing on faith, action and public officials to do justice

The faithful came from as far south as St. Petersburg and as far north as Eastlake, arriving by cars and coach buses to make a stand for justice in Pinellas County.

They were there to advocate for those struggling to find decent, affordable places to live, to speak up for residents harmed by Red Tide and for the poor held captive by the compounding fines and fees of misdemeanor traffic citations.

It was an event rooted in the actions of Old Testament prophet Nehemiah, who called a “great assembly” to right injustices suffered by the people of Jerusalem.

This week, people of diverse faiths and races held a great assembly of their own under the evening sky at St. Michael the Archangel Catholic Church in Clearwater. It was a time to call on those in authority to right injustices facing thousands in Pinellas County. It was a serious occasion, but not confrontational.

“As people of faith, we don’t seek tension, but we don’t fear tension when it should arise,” Father Tom Anastasia of St. Michael the Archangel told the crowd.

FAST’s scripted requests call for straightforward answers  from Pinellas Leaders – a simple “yes” or “no,” with a brief explanation, or risk losing access to the mic.

“At FAST, we hold them in the highest regard. We are not looking to fight. We want to work together,” Rabbi Joshua Lobel of Temple B’nai Israel of Clearwater said Wednesday.

“We have obviously strong feelings about the changes that we would like to see. We spend time as a group going over these questions to ask public officials that are meaningful and would benefit the people in Pinellas County. We try to compromise to come up with solutions that work. It’s really important that they show up and have those conversations,” added Lobel, co-chair of FAST with Father Stephan Brown, S.V.D., of St. Joseph Catholic Church in St. Petersburg.

But not all of the officials who were invited showed up Monday. Newly elected Mayor Ken Welch of St. Petersburg sent a last-minute letter explaining his absence, while Pinellas County Sheriff Bob Gualtieri simply said he was unable to attend.

They heard the Rev. Ronald Wade of St. John Missionary Baptist Church in Clearwater deliver a blistering assessment of Pinellas County. His “tale of two counties” summarized concerns FAST would put before them that evening.

“While out-of-town investors buy up luxury condos, here in Pinellas, over 60,000 families living in our community do not make a living wage and are one paycheck away from being out in the street,” Wade said.

And he added: “Drivers from our own communities are arrested and branded for life for driving on a license that was suspended for a small mistake.”

Holloway, Burke and Slaughter each told FAST that they didn’t agree with the organization’s proposal that offenses such as driving on a license that’s been suspended due to unpaid fees and fines should be eligible for pre-arrest diversion.

Yet each official said he would work with other stakeholders to make those types of offenses eligible for pre-arrest diversion and include a pathway to address fees and fines and restore licenses.

Their answers weren’t quite what FAST had hoped to achieve.

“That’s going to be a longer process and we know that our public officials, our police, especially, they want what’s best and sometimes we disagree,” Lobel said.

FAST is concerned with “finding a way to mitigate the impact of fines, especially on people who don’t have the resources to pay,” he said. “They shouldn’t have to choose between a $150 ticket and feeding their family. Sometimes people don’t even realize that they have been driving with a suspended license, then there are severe ramifications. It creates a problem which really shouldn’t exist. There needs to be a better way. We’re looking to work with our dedicated law enforcement officers to create a new system.”

Alvin Dogan, a parishioner at St. Joseph’s Catholic Church on 22nd Avenue S., spoke Monday evening about his experience. Going into greater detail a few days later, the 63-year-old explained that he was returning to the University of Arkansas when he got a speeding ticket in Natchez, Mississippi.

“As soon as I got back to school, I paid the ticket,” he said.

It would be years before he learned that his license had been suspended. The officer who broke the news let him go with a warning. “The very next day, I went and took care of it. The clerk told me to keep the paper in my glove compartment,” he said.

But that didn’t help when he was stopped again, this time near Gandy Boulevard and Fourth Street N.  This time, the police officer refused to accept the paperwork showing his license had been reinstated.

“They took me to jail,” Dogan said.

The case was later dismissed.

Monday, FAST also had questions for officials about solving the affordable housing crisis. Lobel said he was disappointed that Welch had not been present.

“There seems to have been a communications breakdown,” the rabbi said. “I believe he was under the impression that it was going to be in St. Petersburg. But we are also very committed to creating affordable housing and we look forward to his future participation, because we know he’s going to be a good partner in this work.”

In a letter dated March 28, the day of the Nehemiah Action, Welch said, in part: “During our previous discussion, we discussed potential locations in St. Petersburg for your Nehemiah Action. Due to the location of the meeting in north Clearwater, I will not be able to attend in person.”

The Rev. Lee Hall-Perkins, senior pastor of Mt. Zion United Methodist Church in Clearwater, told those assembled Monday that Welch had let them down.

“We met with him back in October of last year, when he was running for office … At that time, he put the action on his calendar and said, yes, he would be here with us,” Hall-Perkins said, adding that he hoped Welch would attend FAST’s Joshua Assembly in May, which will be in St. Petersburg.

Welch did respond to FAST’s questions by mail, agreeing that he would work with the organization “to identify ways that affordable housing built with public funds can remain affordable in perpetuity.”

As to whether he would commit “to have 5,000 units of affordable housing for families earning 80 percent AMI or less completed or under construction” by the end of his first term, the mayor offered the following: “I will continue to work to exceed the 2,400 multifamily units in the city’s current plan, established by the previous administration. I’ve directed staff to develop innovative plans, funding and partnerships to meet the need.”

Floyd said he supports St. Petersburg setting the 5,000 units goal, but wants the city to look at actual need “and actually creating housing in our community for everyone that needs it.”

Justice agreed “to continue monitoring Penny for Pinellas funds to ensure that a majority gets spent on families earning 80 percent AMI or less.”

To address environmental issues such as water quality and flooding, FAST sought commitment from city and county officials to draft a policy for imposing impact fees on new development, but waive those fees for affordable housing.

The question to Welch was whether he would instruct his staff to draft a policy “for imposing impact fees for water infrastructure on new development with the option to waive those fees for affordable housing for families earning 80 percent AMI or less.” He promised to research the issue “to determine the potential impacts.”

Beckman agreed to meet with FAST to discuss implementing impact fees in Clearwater.

But Justice wasn’t onboard with drafting a policy for impact fees for water infrastructure for new development.

“I’m all for waiving that type of policy for affordable housing development of any percentage. But I will tell you that Pinellas County, just in the last few years, we have created policies, one, a surface water fee for new development,” he said.

“The second thing is that we have created a lateral policy for new development for lateral inspections and new lateral construction. In our studies, we have found that it’s not rain, it’s the inflow and infiltration of laterals, people’s laterals and apartment laterals that is the cause of overflows at our sewer facilities … We actually have a policy for individual residences if they can’t afford it. We have grants to help pay for it.”

Despite some disappointing “no’s,” FAST’s leaders are pleased with its ongoing march toward justice.

“I was genuinely excited about the progress we made for criminal justice and affordable housing,” said the Rev. Andy Oliver of Allendale United Methodist Church in St. Petersburg. “I know we have a lot more to do.”