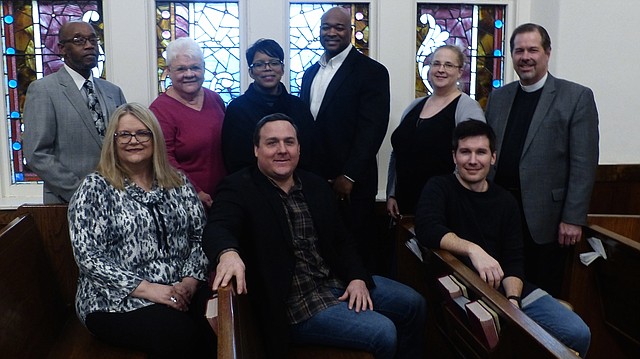 Whether it be jail issues or racism, Justice Matters vows to be voice of the ‘unheard’

As it looks to its fourth year since its formation, the Lawrence interfaith group Justice Matters points to victories won through its mobilization of “people power” and vows to carry on the fight for advances on local issues its members have identified.

“None of us as individuals or as faith groups have the influence, the clout or the money to really affect change,” said Pat Lechtenberg, Justice Matters recording secretary. “But by coming together as a large group of people — and there were more than 1,700 of us at the Lied Center at our founding convention — we can make a difference.”

Since its founding in 2014, the group of 22 Lawrence congregations with 10,000 members has scored successes in the three action issues selected during its first year: expanding local mental health services, affordable housing and child welfare, Lechtenberg said. It has since added the issues of overincarceration and racism to its advocacy list. Those are issues that affect those who aren’t traditionally heard in the community, she said.

In its first three years, Justice Matters gained Lawrence Police Chief Tarik Khatib’s commitment to provide, by the end of 2017, Crisis Intervention Team training to all of the department’s law enforcement officers. The training shows officers how to identify and respond to individuals with mental health problems. It was also instrumental in “rescuing” a long-dormant $100,000 affordable housing trust fund as leverage to building three affordable housing units in Lawrence, Lechtenberg said. In addition, it has been used in schools and preschools to identify and work with students who have what are called Adverse Childhood Experiences.

Although the organization suddenly started making headlines three years ago, a great deal of groundwork went into its formation and the selection of issues it would advance, Lechtenberg said. It also benefitted from its association with a national faith-based nonprofit dedicated to encouraging community action at local levels.

Justice Matters leaders say it is one of 22 grass-roots, nonprofit, congregation-based community organizations in the country that are affiliated with the Direct Action and Research Training Center of Miami, Fla. The DART Center’s website states it has trained more than 10,000 community leaders and 150 professional community organizers to successfully advocate for such things as limiting out-of-school suspensions and juvenile arrests, expansion of public transportation, improving health care accessibility and encouraging investment in affordable housing.

Justice Matters’ leaders say the DART Center’s contribution was the template it provided for its grass-roots organizational structure. It is through that structure that issues are identified and eventually adopted for group action, they said.

That three-step DART Center template calls for first a listening stage in which congregational leaders meet with fellow members to strengthen relationships, network and discuss community concerns. From those conversations, leaders select a few major issues on which to focus. The second step is defined as the research step in which leaders form committees to look for viable solutions and reach out to experts in the community. The final step occurs at annual Nehemiah action assemblies, at which all the group’s congregations gather to — in the words of the DART Center home page — “hear testimonies as to how these issues affect people’s lives and negotiate solutions with appropriate authorities in attendance.”

“I understand how powerful it is to have all the elected leaders on stage give a nod to Justice Matters’ agenda,” Douglas County Commissioner Nancy Thellman said, “but it is important public policy be made through the proper procedures we take an oath to uphold. I wouldn’t do what they are asking for the Audubon Society or any other group.”

Justice Matters’ founding coincided with the Douglas County Commission’s review of county jail needs stemming from overcrowding at the facility. With mentally ill inmates accounting for an increasing portion of the jail’s numbers, the needs of that population necessarily became one of the focuses of review. The county has proposed a three-pronged approach of building a mental health pod in the jail, a mental health court to divert inmates from incarceration to active therapy, and a mental health crisis intervention center.

The crisis center was something Justice Matters embraced, recognizing — sometimes from direct experience — it would address a needed service gap in the community.

“I had a grandson who had to be held for 72 hours before they could find a hospital for him,” Lechtenberg said. “If we would have had a crisis center, there would have been care available in our community, and on a 24/7 basis.”

Justice Matters members say, however, that from their earliest crisis center advocacy with county officials, it was clear that facility would be linked to a jail expansion. It was a linkage that has continued to delay the center’s opening and the badly needed services it would provide, said Ben MacConnell, Justice Matters lead organizer.

The county’s position of linking the jail expansion with a crisis center led Justice Matters to join an ongoing national debate and, in 2015, add overincarceration as its fourth action issue.

With that, Justice Matters has urged the county to uncouple the crisis center from the proposed jail expansion and seek outside expertise to help with its review of the county’s criminal justice system, MacConnell said. It first asked county officials to be among the local jurisdictions the Vera Institute of Justice was assisting through a $75 million MacArthur Foundation grant. The county chose instead to seek a U.S. Department of Justice grant that placed two Bert Nash Community Health Center case managers in the jail for the Assess-Identify-Divert program, he said.

Last fall, Justice Matters took the position that the county needed to contract with either the Vera Institute or the Justice Management Institute for a comprehensive review of its criminal justice system before any decision on funding the jail was made. It makes no sense to move forward with a jail expansion until it is determined how many beds could be saved by a thorough review of all alternatives, said Randy Krehbiel, Justice Matters statistician. That stand doesn’t dismiss the work of the Criminal Justice Coordinating Council, which the Douglas County Commission created in March 2016, but recognizes that such a review is a complex and time-consuming effort, he said.

“We think it is important a very careful study be done of all alternatives to keep people out of jail and shorten their stay,” he said. “Maybe the CJCC could do that. The alternative would be to bring in an outside group that specialized in that kind of work.”

With jail expansion on the table, the time is ripe for a complete review of the county’s justice system, from law enforcement’s first contact with suspects to diversion and bonding policies and Douglas County District Court procedures, MacConnell said. Justice Matters members concede there are limitations with the jail, such as bed space for women, but say they should be addressed after all alternatives to incarceration are identified, he said.

“Early on, the Vera Institute said this was the opportunity when we are bumping up against capacity for the community to examine what’s going on,” he said. “If we miss that opportunity now, we won’t have that discussion for years to come. The opportunity of hitting the pause button is now.”

The Douglas County Commission argues it hit that pause button in April 2016 when it agreed reviews by the CJCC would not be finished in time for a November 2016 bond election for the jail expansion and crisis center. It remains on pause with Commissioners Thellman and Mike Gaughan, allowing new 2nd District Commissioner Michelle Derusseau time to get comfortable with the issues. For her part, Derusseau said she wanted to take the time needed to ensure the right decisions were made.

Any assessment of jail overcrowding would find the county cannot address all its causes on its own, Thellman said. State-mandated sentencing statutes have lengthened inmate stays and cuts to the Douglas County District Court have stretched out trial processes, while a decrease in public defender compensation has hindered effective representation of inmates, she said.

The county would welcome Justice Matters’ help in Topeka on those issues, as well as advocacy that the state reverse cuts to mental health spending, Thellman said.

Krehbiel said Justice Matters has concentrated efforts at the local level because that was where the organization believed it could make the biggest difference. The group would consider a request from the county to partner in the advocacy of jail overcrowding issues, he said.

At a minimum, Justice Matters wants assurance that only those who need to be incarcerated for public safety are in jail, and that the facility is the option of last resort in the county’s criminal justice system, Krehbiel and MacConnell said.