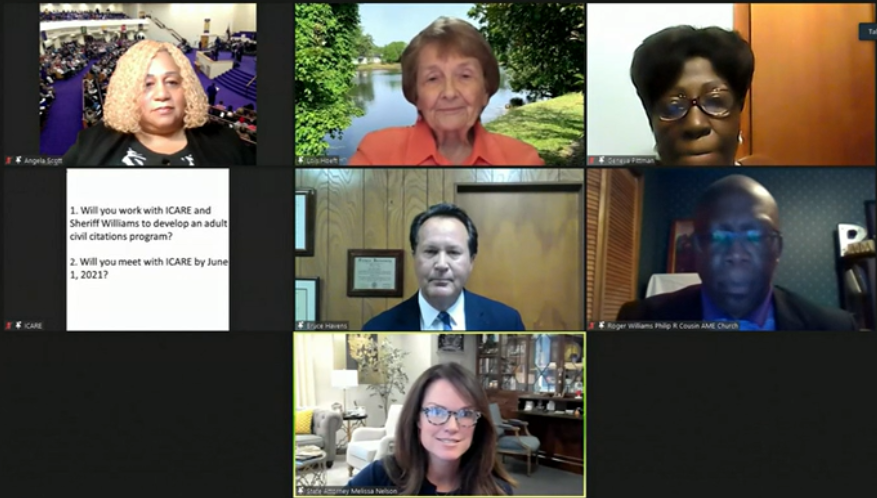 JACKSONVILLE, Fla. – Duval County is now one step closer to implementing adult civil citations in place of arrests for some nonviolent crimes.

Members of 38 religious congregations in Duval County that make up ICARE invited Nelson and Sheriff Mike Williams to attend with hopes that both would go on the record to either agree or disagree to support a civil citation initiative for adults. A similar program is already in place for juveniles.

That means offenders would have to go through certain steps, which could include restitution, community service or paying a fine. Havens said the civil citations would only apply to people who commit nonviolent crimes such as driving on a suspended license, petty theft or possession of small amounts of marijuana.

During Monday night’s meeting, Nelson was asked: “Will you work with ICARE and Sheriff Williams to develop an adult civil citations program?”

Although Williams did not attend as originally scheduled, Nelson made it known that she and the Jacksonville Sheriff’s Office had already been in discussion about this issue when it comes to avoiding arrests for violations such as driving on a suspended license.

“The Sheriff’s Office has reached out to us to ask is there a way we can make this happen on the street to avoid arrests entirely,” Nelson said.

But during her closing statement on this subject, she made one thing very clear: A pre-arrest diversion program like this must be led by law enforcement because police will always have the initial interaction with a suspect, then her office gets involved after an arrest.

Havens also made one thing very clear about civil citations that should not be understated.

“They are still subject to being arrested if they don’t fulfill the program, so there is accountability across the board with it,” Havens said. “That’s why it’s a great program.”

In addition to civil citations, the meeting also focused on crisis intervention and reducing gun violence.