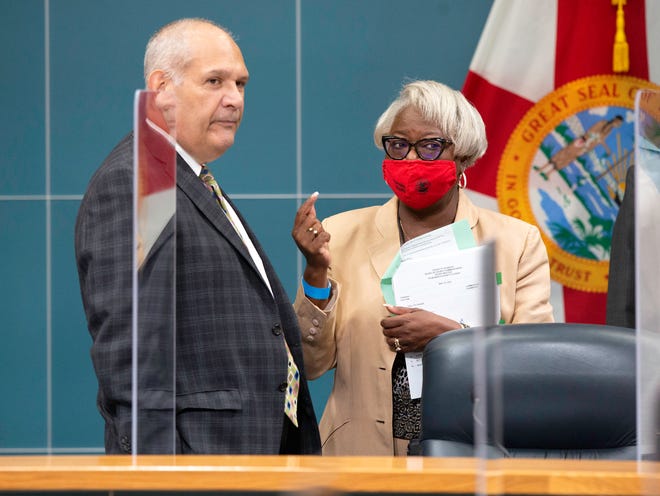 Weeks after admonishing the Palm Beach County administrator for proposing to use $62 million in American Rescue Plan dollars to balance the budget, county commissioners Tuesday appeared satisfied with using a smaller amount of $46.4 million to make up the shortfall caused by the COVID-19 pandemic.

But much of the budget discussion didn’t revolve around a multimillion-dollar expenditure. Rather, some commissioners fretted about a possible $75,000 grant to the Legal Aid Society of Palm Beach County for its community ID program, which is meant for residents who are otherwise unable to get a federal or state ID.

“If Legal Aid can find a private funding source and they want to continue this program, that is all well and good. But I cannot support public funding for this,” Vice Mayor Robert Weinroth said.

Weinroth, along with Commissioners Maria Sachs and Maria Marino, were concerned about the implication for taxpayer dollars going toward the program; that community ID holders would use this ID as a driver’s license or another legal form of ID; or that these IDs would open a Pandora’s box for fraud.

“My concern is not $75,000. My concern is that I don’t want undocumented folks to think that this is a legal ID,” Sachs said. “(A legal ID) is not a Costco card with your picture on it. It is not a $20 ID card that you can get from Legal Aid.”

Commissioners Gregg Weiss and Melissa McKinlay tried to reassure their colleagues of how the program benefits residents, reminding them the ID isn’t meant to replace a driver’s license or other form of legal identification.

“You could be a senior citizen. You could be a returning citizen, or maybe somebody who is here undocumented, or maybe even a visitor that would require a local ID in order to … participate in some of the programs that we have for getting vaccinated or tested (for COVID-19),” Weiss said.

McKinlay shared her own experience of the hoops she had to jump through while changing her legal name, all the while facing a deadline for a job offer at the county.

“I want you to imagine that that’s a woman who has fled a domestic violence situation and needs an immediate ID while she works out getting all of that paperwork,” she said. “This isn’t just an undocumented worker problem.”

Identification is needed for residents to turn on their utilities or open bank accounts, Weiss added.

“You’ve got to show a photo ID to buy Sudafed, to get a library card, to enroll your child in school,” McKinlay noted.

Legal Aid Society lawyer Vanessa Coe, who runs the program, told The Palm Beach Post that one credit union accepts the community ID for banking, and others have allowed people to use it as a second form of identification.

“Folks without any ID are unable to use banking systems, which create a risk to the individual either because they are at risk for being robbed as an easy target or because they are instead forced to cash their checks at a check-cashing store, which carries a penalty or user fee thereby, reducing their wages,” Coe said.

Mayor Dave Kerner offered another perspective to his colleagues: should a cardholder get in trouble with the law, it can prove one’s ties to the community and lead a law enforcement officer to give a notice to appear over an arrest, in turn keeping the jail population down.

“Whether the public agrees with having undocumented workers here or not, the reality is that they are here, and they do have ties, and sufficient ties, to our community to be released on their own recognizance for a minor violation but for having an ID card that identifies them through some vetted process,” he said.

During the annual Nehemiah Action Assembly hosted in March by People Engaged in Active Community Efforts, or PEACE, Sheriff Ric Bradshaw said that he would want the program “to be acceptable to all the police departments in the county.” He opposed the program in 2017, and the County Commission denied a similar grant.

When asked how Bradshaw viewed the program on Thursday, spokeswoman Teri Barbera said, “I am told we are still in research mode and cannot form an opinion at this time.”

Coe said the Legal Aid Society is unaware of any issues stemming from the community ID.

“If someone wants to invest multiple thousands of dollars in the equipment to make a fake ID card, they are not going to be interested in the forging (of) a community ID if they are able to replicate or create a fake Florida ID or other state ID card,” she said. “Community ID does not offer enough ‘bang for your buck’ if (you’re) interested in committing a crime with it.”

Renewing a passport or “matricula consular” card may not be an option for some, as not all consular offices are local, Coe said. And a Costco card not only doesn’t have a person’s address on it like the community IDs do, but they come with an annual fee.

Marino told PEACE members to raise private dollars for the program through the church.

“That was not accepted as a suggestion,” Marino said.

Having support from government agencies provides “credibility” and “reoccurring and reliable source of funding” that other organizations may not be able to supply, Coe said. Some agencies have already endorsed the community ID program such as the West Palm Beach Police Department.

“Socially, having government support lets people know that if you are living, working and building up the community, you are also a valued member of our community and are welcome here,” Coe said.

Commissioners will have an in-depth discussion Aug. 17 of whether to provide this grant in next fiscal year’s budget.

“It’s not a panacea, but we have people here that are working and living in our community. We’ve created barriers, maybe for good reason, but we also need to help people on how they navigate through these barriers. They’re valuable parts of our community,” Weiss said.

‘Biden bucks’ for budget cuts
Before setting next year’s tax rate at $4.78 per $1,000 of taxable value for the 11th year in a row, commissioners heard from County Administrator Verdenia Baker of what might be sacrificed if some of the $290 million in American Rescue Plan Act dollars, colloquially known as “Biden bucks,” is not used to balance the budget.

This followed a presentation by Baker about how the county may spend these federal dollars over the next five years, which could include $75 million on water and sewer projects.

While property tax collection had a banner year under the COVID-19 pandemic, other revenue streams suffered: Gas taxes were down by $7.7 million, parks and recreation fees dipped by $4.2 million and the half-cent sales tax was short by $5.8 million.

The county would have faced a $46.4 million shortfall without the federal dollars, Baker said. That meant the county departments that fall under the purview of the County Commission would be subject to a hiring freeze; the base budgets for these departments would be cut to the tune of $7.9 million; and reserves would have to lose $7.7 million.

Link’s office had the highest budget request increase compared to her colleagues because the Legislature made sweeping changes to the elections process that will require documents to be reprinted and the IT system to be separated out from the county’s firewall.