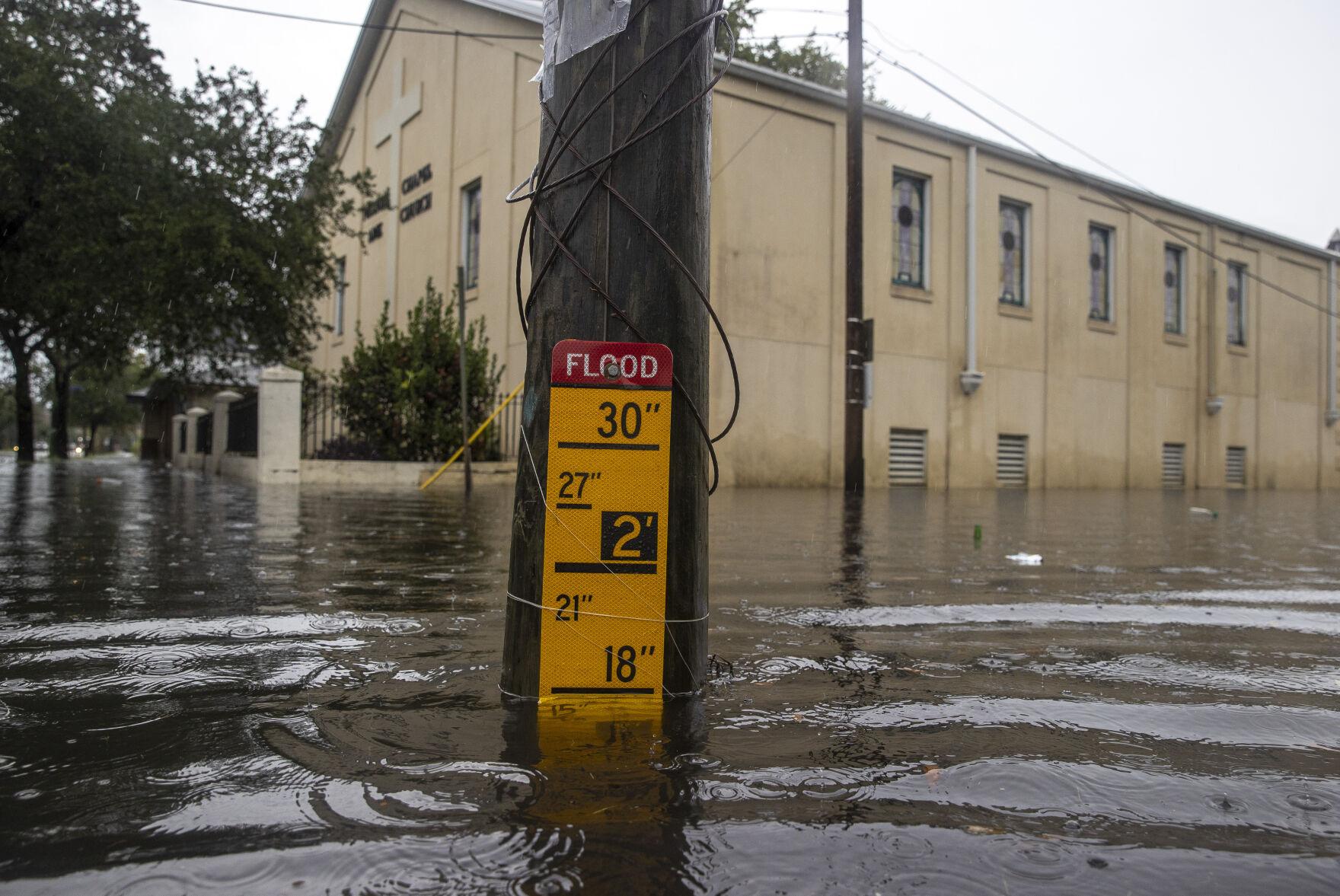 The sun shone brightly on Gadsden Creek and the surrounding area the morning of Sept. 10 as residents went about their weekend after some were forced to stay at home due to significant flooding and rainfall.

Residual effects of the flooding lingered, however.

High tide paired with heavy rainfall had created optimal conditions the morning of Sept. 9 to overflow the West Side’s Gadsen Creek and flood the African American neighborhood north of the Extension highway. Pooling at the intersection of Bogard and President streets reached 18 inches, measurements fixed on an electricity pole showed. Several roadways scattered throughout Charleston’s downtown also closed that morning due to the conditions.

Once the rain ceased around 9 a.m., the flood began its descent.

At the intersection of Bogard and President streets, a man on a porch and another working at the bodega on the corner reported their properties had emerged unscathed — this time.

The following morning, the sidewalks were muddy and consumed by small ponds with floating waste. Shards of glass and bottle caps were buried under the mud.

A woman in flip flops and an oversized red T-shirt made multiple trips to the corner store, named Green’s Grocery, which was bustling with activity on the weekend morning. The corner store sits across from the public housing complex Gadsden Green Homes, also known as “Back to Green.”

Michelle Williams, 53, who identified herself as “the runner,” explained she helps elderly people or people with children in the neighborhood purchase groceries.

Williams said that when the flooding gets bad — not a rare occurrence — the water can go above her knees. She said she goes barefoot.

The floods generally diminish within hours, but their effects can last longer.

Williams said she has helped people living in the low-lying public housing whose apartments flood, and that kids do not want to play outside after a flood because of the muddy conditions.

One woman inside the corner store with her young daughter said she has had to miss work because of flooding. Another said if the bus stops running, she zigzags through the neighborhood to reach higher-lying streets. A man joked that residents know better than to wear their nice shoes outside.

They claimed it has only gotten worse.

Across from the convenience store stands Nichols Chapel AME Church. Its senior pastor, Joe Darby, described flooding as a “chronic problem” in the area, arguing that climate change has exacerbated the issue.

Darby said the church — built in the 1980s — does not flood. People cannot enter the building, however, when the adjacent roadways are underwater.

He recalled a moment during his first months preaching at the church.

“I was preaching and saw people getting up and leaving. And I thought ‘Oh my, is my sermon that bad?’”

Darby afterward learned that his sermon had not been the issue — outside, water had started rising, and people rushed to move their vehicles.

The flooding negatively affects the livelihoods of residents, the pastor said, many of whom live in public housing built in the mid-20th century as part of a federal program to develop areas the government considered slums.

As part of the federal initiative, the government bulldozed Black-owned homes in the West Side and replaced them with public housing units. Separately, the city created a landfill nearby to dump Charleston residents’ trash.

Today, those homes remain near what is one of the peninsula’s last remaining tidal creeks, but they also reside next to the defunct landfill, which the city inadequately sealed.

Residents wading through flooding, as a result, are “walking through e. coli and other industrial things — God knows what else,” Darby claimed.

Darby said he is passionate about overcoming “environmental racism” and supports efforts to restore the creek as a vital natural resource for the longtime Black community.

The creek has become a lightning rod in Charleston politics.

Darby is a member of the Charleston Area Justice Ministry, which has joined forces with the advocacy group Friends of Gadsden Creek to oppose current drainage proposals that call for filling the creek.

Supporters of the mitigation plan, proposed by the development company WestEdge, however, argue that filling the creek could decrease flooding.

As the groups continue to litigate the issue, Darby said he continues to pray for weather that allows congregants to gather inside the chapel.

“If we have Sunday worship scheduled, Bible study scheduled, funerals scheduled, or other things, we have to pray that the rain will allow us to do it,” he said.

Forecasts had predicted a wet weekend, but the sun shone throughout the day of Sept. 10 on the chapel and downtown Charleston.

The National Weather Service’s Charleston office forecast the possibility of locally heavy rainfall Sept. 11 and warned of possible flooding in downtown Charleston if rainfall coincides with high tide. It also noted an enhanced risk of coastal flooding and rip currents at Lowcountry beaches.