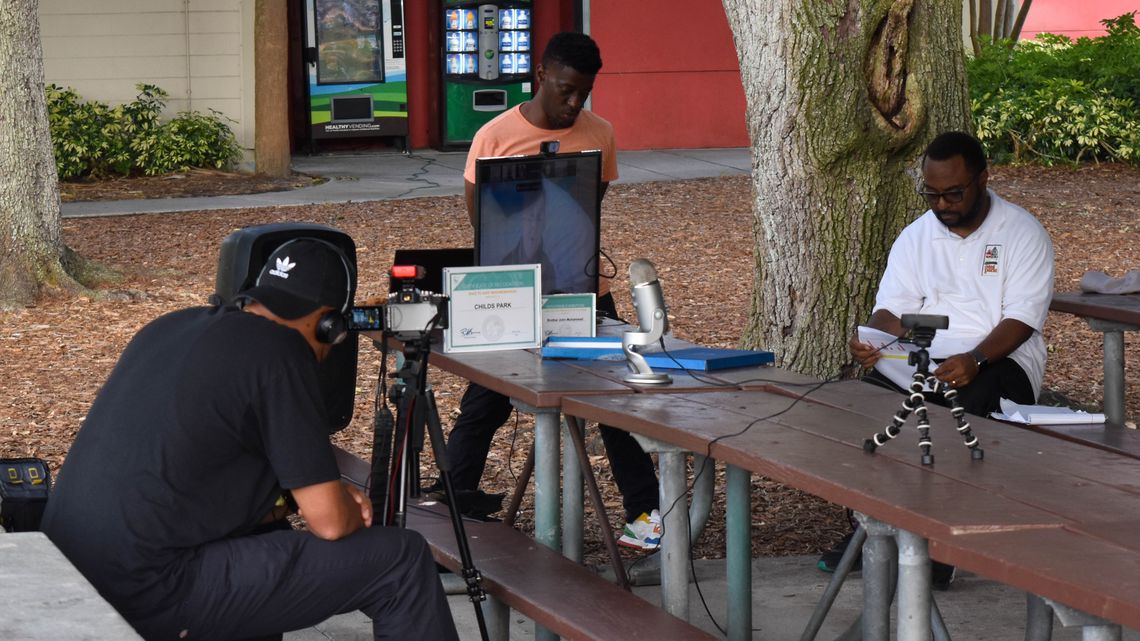 Yes, the noise from kids on a nearby baseball field may occasionally drown out the Zoom speakers flashing across a jury-rigged TV, but that hard hearing’s a small price for reuniting neighbors. In-person and online hybrid gatherings are how you reach people now, said community organizer Jabaar Edmond, the neighborhood association’s vice president.

“If we go back to the antiquated, I think we’re gonna lose ground,” he said.

Even as the pandemic recedes, grassroots groups say they are adapting to lasting changes to community organizing. A newfound embrace of accessible technology has changed the way organizers connect with each other and their communities. The pandemic and protests following the high-profile deaths of Breonna Taylor, George Floyd and others at the hands of police have also remolded communities’ political awareness, organizers say.

“We saw these disparities in health … and then we saw these interactions with police,” said Brother John Muhammad, the neighborhood association’s president. “That kind of sparked the consciousness.”

Newfound awareness of social issues pushed four new congregations to join a group of interfaith congregations advocating for social change known as the Hillsborough Organization for Progress and Equality, or HOPE, said Brad Cassell, the group’s co-president. He said 23 congregations are now part of the organization.

New organizations inspired during the turbulent year have cropped up in St. Petersburg. The St. Petersburg Tenants Union started when founder William Kilgore began to track local evictions online after COVID-19 forced many people — including him — out of work. The organization now works to unionize apartment complex tenants and lobby for tenant-friendly laws.

Tri-Partisan Canvas, which pushes for civic engagement in South St. Petersburg’s Community Redevelopment Area, also formed this year. “One big global pause helps you look in the mirror, and look around, and face the issues that are most prevalent and pressing,” Tri-Partisan organizer Rissa Wray said.

Digging at digital grassroots
Community groups had to better communicate during the pandemic to avoid duplicating efforts as they worked with limited resources, according to Maryellen Gordon, who leads voter registration efforts for the League of Women Voters of the St. Petersburg Area. Gordon worked on voter registration with a coalition of groups using weekly phone calls. She thinks those connections will last.

“We’re all constantly just staying in touch with each other in a way that probably would not have existed before,” Gordon said, adding that live video streams of city and county government meetings make it easier to keep tabs on local policy, too.

Muhammad said Childs Park’s neighborhood association was able to thrive during the pandemic because it had already become accustomed to virtual communications, like video streaming, before the pandemic started. With the support of other community groups, he helped establish a pop-up COVID-19 testing site at Childs Park, provide 15,000 meals to families and pass out 20,000 masks, he said.

Cassell noted that many people now expect digital access to events and said some prefer it to having to attend in person. HOPE will have to adapt and continue to provide online options, he said.

Still, there’s an excitement about getting back to face-to-face interactions this year, to escaping the rigidity of Zoom meetings and scheduled calls.

“Usually the magic happens after the meeting in the parking lot,” Muhammad said.

At the Childs Park Neighborhood Association meeting, Maress Scott, whose son Marquis was shot and killed in 2019, spoke about his campaign to fight gun violence. As he sat down, neighbor Geneva Gibbs stood up, walked around the shaded picnic tables and whispered to Scott. Then she hugged him.

Gibbs, who has lived nearby for nearly 50 years, said she couldn’t participate much during the pandemic because she struggles with technology.

“I think you can get a lot more when you can look at a person eye-to-eye,” she said.

At HOPE’s annual Nehemiah Action, participants ask tough questions of local elected officials and try to procure pledges from them. This year, the event was live-streamed and 2,000 people logged on from home. Even though the elected officials could surely see attendees filling dozens of Zoom pages, it didn’t have the same power as having all those people physically in front of them, Cassell said.

“There’s nothing like them seeing 1,500 people in an auditorium, all eyes on them,” he said.

For Gordon, getting face-to-face creates a connection necessary for successful voter registration. She recently registered three formerly incarcerated people and doubted she could have done it online.

“You can really only do that effectively in person because you have to engage, they have to trust you,” she said.