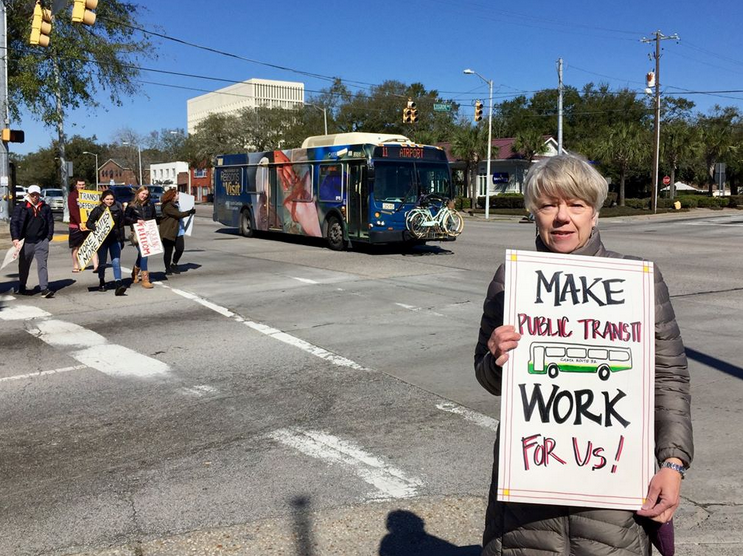 Last week, the Charleston Area Justice Ministry (CAJM) along with the ACLU of South Carolina, Citizens Climate Lobby, Best Friends of Lowcountry Transit, Charleston Climate Coalition, and the Center for the Study of Slavery Social Justice Working Group held a press conference at the Cherokee United Methodist Church to show support for increased bus frequency. The average bus in Charleston runs on a frequency of once every hour making life extremely difficult for the 11,000 people who rely on public transportation every day, the group contends.

Last year, thousands of people gathered under the banner of CAJM to push for more frequent buses – specifically on North Charleston routes with high transit-dependent ridership. They are carrying that campaign into 2020.

Minister Jerod Frazier of Charity Missionary Baptist Church said, “Thousands of people depend on buses every single day in our community. They have no other option to get to work, school, or the grocery store. But the average bus arrives once every hour. That means people often arrive an hour late or early. It means losing jobs because you don’t have frequent transportation. It means being unable to get to your kid to pick them up from school.”

Dr. Matthew Cressler of the College of Charleston on behalf of the Center for the Study of Slavery’s Social Justice Working Group said, “In 2015, the College’s Race and Social Justice Initiative published a report on the state of racial disparities in Charleston County. The report found that inadequate public transportation limits black residents’ access to everything from affordable housing to quality education and even food and health care. Not only that, it contributes to the segregation of our cities,” he said.

Routes crisscross communities with the highest percentage of transit dependent riders in the Lowcountry, but buses run only about once an hour. Infrequent bus service is an inconvenience for those seeking an alternative to their personal car, but for transit dependent riders it is a hardship that affects the basic tasks and daily routines of life and encourages people to walk or bike on unsafe bridges and roads. The health, safety, and economic burden from this inability to access food, services, and employment safely and efficiently presents an injustice to some of the region’s most vulnerable residents, the group contends.

“We need more funding for CARTA and more allocated to Routes 32, 11, and 12. We’ve been told that bus service can’t be expanded unless ridership expands and brings in more money from fares, but this is like a restaurant that decides it will only order food and improve the dining experience if customers show up first,” the group insists. “Increasing frequency has been shown, in multiple transportation studies, to increase ridership.  A reliable and frequent bus service, along a route that has been made safe for its users is the way to increase ridership.

“Of all the large businesses and institutions in our rapidly growing region only three—the College of Charleston, the Medical University of South Carolina, and a group of downtown restaurants– help to subsidize bus service. Tell our local businesses ‘Do your fair share for public transportation!’ CARTA has made significant improvements to bus shelters, transfer options, and fares for students, but there is no plan to increase frequency for our most transit dependent riders. Tell the CARTA board to develop a plan and timetable for increasing frequency.”