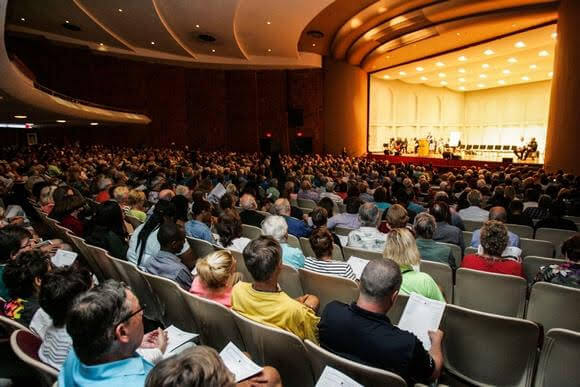 DELAND — As people throughout Volusia County continue to struggle to pay rent every month, the local FAITH group is not letting up on its push to help those low-income tenants.

Dozens of FAITH members held a prayer vigil outside of the Volusia County Administration Building before Tuesday’s County Council meeting, and then they poured into the Council chambers to implore the county to launch an affordable housing trust fund.

“Rent increases are leaving so many people behind,” said South Daytona resident Patty Quigly, who told Council members her granddaughter had to move in with her in 2019 when she couldn’t afford her rent.

FAITH wants the County Council to get the housing trust fund started with at least $2.5 million from the $107 million the county received in federal American Rescue Plan dollars. Then the nonprofit wants the county to add at least $1 million to the housing fund each year.

FAITH also wants the county to do a study on whether linkage fees could become a dedicated revenue source for the housing trust fund.

Linkage fees can help reconcile the connection between new development and the rising cost of rent. The fees work by assessing a certain dollar amount per square foot of new development, and then the fee revenue goes into the housing fund.

Last year the city of Daytona Beach commissioned a study on the use of linkage fees, but the results of the study have not been shared yet.

Two other County Council members, Billie Wheeler and Heather Post, sent written statements saying they support the fund idea, but they did not attend the rally.

It would take at least four County Council members to start the fund, and if a vote isn’t taken before the end of the year, Wheeler and Post won’t have a chance to cast yes votes. Their terms are expiring in December, and both have said they don’t plan to run for re-election.

Only three of the seven Daytona Beach city commissioners came to the March 28 FAITH rally, and the Rev. Phil Egitto made it clear that night he was disappointed so few elected officials responded to FAITH’s questions on the housing fund.

“Our officials are not taking us seriously,” said Egitto, pastor of Our Lady of Lourdes Catholic Church in Daytona Beach. “It is unconscionable that our elected officials are ignoring us.”

FAITH member Jackie Mole urged Council members Tuesday to help, but in a way that doesn’t raise taxes for local residents. He hopes Council members will consider a linkage fee of at least $1 per square foot.

“The new jobs being created often don’t pay enough for people to afford housing,” Mole said. “It’s unacceptable that there are 2,465 school children (in Volusia County) who don’t have a stable place to call home.”

FAITH has gathered the signatures of more than 1,200 people who support their affordable housing trust fund proposal. During Tuesday’s meeting, FAITH member Ben Collins handed the petitions with those signatures to County Chair Jeff Brower.

To afford the average one-bedroom apartment in Volusia County, a tenant would have to earn more than $17 per hour and work fulltime. But the mean wage among renters in Volusia County is $13.35 per hour.

Nearly 30% of local renters expend more than half of their income on rent.

Volusia County could use 16,000 more affordable rental housing units, FAITH leaders say, and they want the county government to set up a housing trust fund to help make that possible.

FAITH officials say there are housing trust funds in more than 700 communities across the country, including new ones in Orange and Hillsborough counties.

The funds can provide grants for projects that create, sustain or renovate housing that’s affordable for people earning 80% of the area median income. An example of who’s eligible is a family of three making less than $40,000 a year.

FAITH, an acronym for Fighting Against Injustice Towards Harmony, is a nonprofit interfaith organization made up of 30 diverse congregations in Volusia County. The organization was founded in 2000 by a group of local clergy as a way for congregations of various racial and denominational backgrounds to join forces and address community problems.

FAITH was a key player in the creation of Daytona Beach’s First Step Shelter for homeless adults, a health clinic for the uninsured in Daytona Beach, the expansion of VOTRAN bus service for late shift workers, and a substance abuse treatment program at the Volusia County Jail.

FAITH wants the Volusia County Council to create a housing trust fund before the end of 2022. The money in the fund could be used to help create, rehabilitate and preserve housing for low-income people.

Grants could be given to both nonprofit and for-profit developers to fill the gap between the cost of development and what working families can afford for rent.

FAITH members say local workers, including nursing assistants and security guards, don’t earn enough to afford a one-bedroom apartment. Some senior citizens in FAITH congregations are having to decide between buying prescription drugs and keeping a roof over their heads, they say.

FAITH leaders say developers won’t build affordable housing without government help. Incidentally, on Tuesday Council members approved the issuance of $24 million in multi-family housing revenue bonds by the Housing Finance Authority of Volusia County for the Clyde Morris Landings Apartments. A total of 227 apartments are being built, and at least 20% will be affordable.

On Tuesday Council members also approved a $1 million grant for new temporary housing for veterans in a Derbyshire Road facility just north of Daytona Beach. And they approved spending $2.67 million in federal funds for homelessness help and prevention.