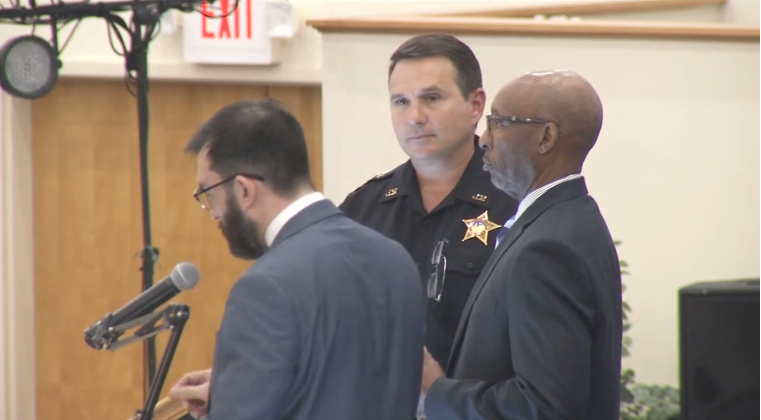 JACKSONVILLE, Fla. – Jacksonville’s sheriff and other elected officials were pressed on local issues, including “Walking While Black,” at an annual event Monday night that calls elected officials to accountability.

Sheriff Mike Williams attended the meeting of church leaders hosted by the Interfaith Coalition for Action, Reconciliation and Empowerment (ICARE), an organization of 38 local religious congregations of all denominations representing about 30,000 people in Jacksonville.

“Tonight, we’re going to engage Sheriff Williams because we want to build trust with JSO and the community,” said St. Paul Lutheran Church Pastor James Wiggins. “We feel he should take the lead on that priority.”

“We believe in justice,” said Unitarian Universalist Church of Jacksonville Pastor Phillip Baber. “If that takes a little bit of creatives in support of tension being placed on our public servants to do the right thing, then that’s what we’re here to do.”

During the meeting, Williams once again took on the issue of “Walking While Black.”

The latest report in the “Walking While Black” series, a collaboration by the Florida Times-Union and ProPublica, contends his office is using misleading numbers as a defense for what they claim is a disproportionate number of jaywalking tickets issued to African-Americans.

ICARE leaders asked about the controversial issue of ticketing jaywalkers, which the reports say target black people, and why the sheriff gave back money to the state that was designed to help people released from prison.

The high-profile case of Devonte Shipman, a Jacksonville man who received two tickets June 20 for not having ID on him and for not using a crosswalk on Arlington Road, went viral after cellphone video of his encounter with a police officer was uploaded to Facebook.

It was the start of the controversy that led to the investigation by the Times-Union and ProPublica, looking into what they found to be a disproportionate number of similar tickets issued to blacks.

Over the weekend, the Times-Union published the report, saying the sheriff was using misleading numbers by including tickets for soliciting on roadways.

But Williams told News4Jax on Monday, ahead of the meeting, that his agency’s numbers are correct.

“At the end of the day, we stand by our numbers,” the sheriff said.

ICARE leaders said they believe warnings, not tickets, are the way to go.

“A ticket comes with a $62 fine,” said Geneva Pittman, with ICARE. “Let’s just warn the people and then give them a chance by educating them.”

But Williams said he won’t take that “tool” away from his police officers.

“We’ve already done a lot of communication with the officers about using a lot of discretion, taking infrastructure into account, and using a lot of education and warning in lieu of citations,” he said. “The idea is public safety, not generating citations. So if we can educate pedestrians — the goal is to keep them safe.”

Both the sheriff and ICARE say it’s a successful program designed to help people getting out of jail to get back on their feet.

Last year, the Sheriff’s Office had to return $600,000 of the JREC’s budget to the state because it was not being spent.

“We want him to find another way of funding for JREC,” Pittman said.

But Williams said his agency can’t do that.

“That was a one-time infusion of money from the state and we weren’t equipped to handle that much money at one time,” the sheriff said. “(We) had some challenges with the state on contracts and that type of thing, so we did send a significant portion of that money back.”

ICARE leaders and the sheriff said the believe the conversation with the community is productive.

“We believe the sheriff is responsive,” Baber said. “This is a mass gathering of people. There’s no other meeting like this anywhere else in the city, anytime during the year, where we bring 1,500 to 1,700 people — the constituents, the public — to come and address public service, those that have been elected by them to serve them.”