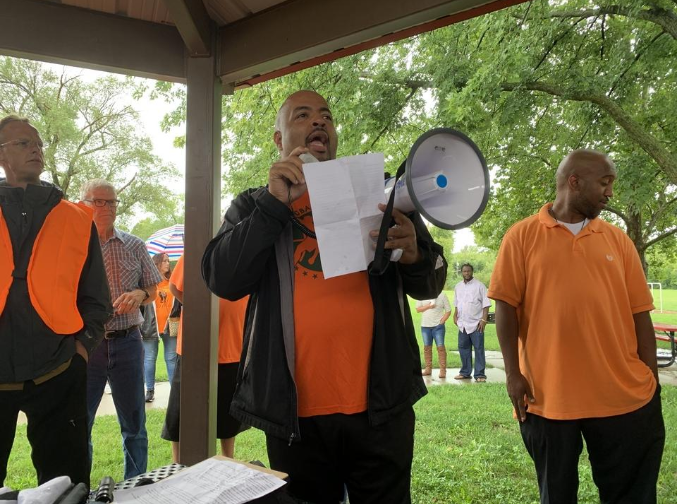 Despite overcast skies and rainy weather, more than a hundred community members showed up on Sunday afternoon to Betty Phillips Park in southeast Topeka to call for an end to gun violence in the capital city.

Chants of “Enough is enough” and “The violence must stop” filled the air as attendees of the Neighborhood Peace Walk made their way through Topeka’s Hi-Crest neighborhood. The peace walk was organized by community volunteers, the Topeka Center for Peace and Justice and Topeka JUMP, an organization of faith leaders who advocate for sound policy at the grassroots level. And their message was clear.

“Our message to groups involved in violent crimes is simple: we’re not going to tolerate this any longer,” said community volunteer Evan Watson. “We love you. We want you to live alive and out of prison. There is a different path, and we want to help you find it.”

According to Mike Calhoun, one of four community volunteers who helped organize and steer the Neighborhood Peace Walk, the event was the first step in raising awareness of Topeka’s gun violence and calling for community action.

“This is kind of the first step to get to know everybody, for our faces to get in front of everybody, to get our names in front of people — so that way when we knock on doors or when we’re talking to people, they already know who we are, where we’re from,” Calhoun said.

He added that Group Violence Intervention — an evidence-based strategy developed by the National Network for Safe Communities — is the type of action Topeka needs to adopt to deter individuals involved in criminal activity from committing violent offenses.

“It’s just overdue and needed,” Calhoun said. “We need boots on the ground and people in the home to start helping out, to be able to give other direction and opportunities for people who think they’re going in one direction.”

“It’s cut violence down tremendously in different communities and had a lot of success, and we’re looking at adopting it here and bringing it here to Topeka,” Calhoun said. “We think Topeka is a prime place to be able to get the same thing going.”

Gun violence hits “close to home” for Topeka native Helena Adams, who attended the peace walk Sunday with her daughter. Adams, who grew up in East Topeka, said they showed up for the event because she feels gun violence has “gotten worse” over the years.

“It hits home because we lost family members to a murder suicide, and I’ve lost friends to shootings, to guns,” Adams said. “There are just other ways to solve problems without shootings, and it all stems from, not just our youth but our adults.”

While she added there are many reasons a person might turn to violence, she feels it is time for Topekans to help each other, and the community, steer away from such activity.

“I think mental health has a lot to do with it. I think upbringing has a lot to do with it — the environment and just the easy access to guns,” Adams said. “It’s just time for us all as a community to step up and let there be awareness of the love and caring that we have for each other, to try and stop this and bring awareness and attention to this serious issue.”

And she argues everyone should get involved.

“Police can’t do it on their own,” Adams said. “They need the community.”