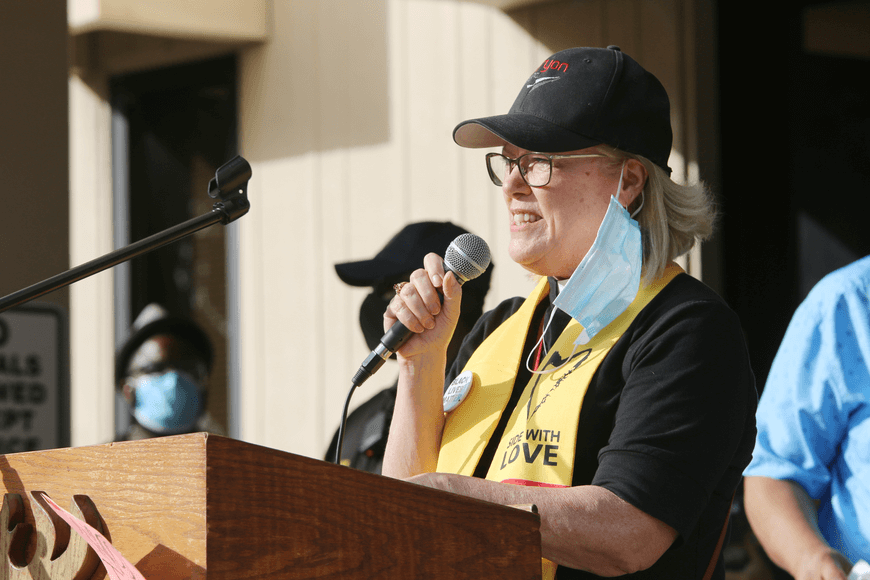 DAYTONA BEACH — Despite all the uncertainty swirling around the protracted debate over whether to build a new homeless shelter in Volusia County, one thing is certain: The FAITH group that has fought so passionately for the one-stop assistance center for the unsheltered has not lost an ounce of its faith in the idea.

“We want to change the world,” the Rev. Peter Cotrell, with Coronado Community United Methodist Church in New Smyrna Beach, told the cheering crowd packed into the Bethune-Cookman University Performing Arts Center Monday night at FAITH’s annual action assembly. “We are serious about justice, love and respect. We are the voice of the voiceless.”

The FAITH group, made up of 32 local houses of worship and thousands of members, found several things to cheer about in its battle to help the homeless.

Local churches have raised $22,000 for the shelter effort, and a check for that amount was presented to Daytona Beach Mayor Derrick Henry.

Gary Tester, the executive director of Catholic Charities of Central Florida, got up on stage in the performing arts center and said his organization is willing to be the lead agency of the shelter if it comes to be, and will also work to raise money and seek grants for the venture.

“We are honored to be part of this project,” Tester told the crowd. “We look forward to supporting this ministry and engaging others to support it.”

For the past few years, Halifax Urban Ministries had been the agency local leaders said they wanted heading the shelter. Before the rally, HUM Executive Director Mark Geallis said his agency could use a hand with governance and organization of a shelter.

FAITH also managed to get 11 elected officials from throughout the county to get on stage and agree that homelessness is a countywide problem. Another victory came when Henry and all four of the Daytona Beach city commissioners at the event agreed to give $400,000 per year to the shelter.

The three officials from Orange City and Daytona Beach Shores agreed to provide annual funding to the shelter, as well. But Ormond Beach Mayor Ed Kelley and DeLand Mayor Bob Apgar both said no to providing more than $132,000 per year each.

Doug Daniels, the only County Council member who attended the event, said he would support the county providing land and up to $4 million for construction of a countywide shelter, as well as $400,000 per year for five years for shelter operating costs. Council members Joyce Cusack and Josh Wagner both sent written responses to FAITH saying they would support the land contribution, construction money and operating money as well.

While FAITH members were excited Monday, the event reflected what has kept the shelter from getting built: Some cities aren’t even a part of the shelter discussion, and only Daytona Beach has been able to get a majority of its members to agree to support financing the shelter.

“This isn’t about a lack of money, but a lack of political will to work together,” said FAITH leader Joan Campanaro. “The solution may not be perfect, but it’s time to stop the bickering and make (the shelter) a reality.”

Despite the enthusiasm of FAITH members for a comprehensive shelter, and their consistent lobbying of elected officials the past few years, there is still no deal in place to make the shelter a reality.

A year ago, the county government offered to provide free land and up to $4 million for construction of a shelter if Volusia’s cities banded together to cover costs to run the facility. Daytona offered to pay $400,000 per year for operating expenses, which would take care of 25 percent of the bill every year if the shelter followed the proposal to create a 250-bed center that would cost about $1.6 million per year to run and maintain.

Some cities indicated a willingness to chip in smaller amounts for operations, but it’s never added up to enough cities and enough money to cover bills. So the idea to create an adults-only shelter where the homeless could get an array of services on-site remains in limbo.

During their March 3 meeting, County Council members rejected the offer the city had made the day before for $400,000 per year since it didn’t also include a solid plan of how the remaining $1.2 million would be covered every year.

Council members haven’t closed the door on helping with a large-scale shelter, but they and elected leaders throughout the county are increasingly hearing other ideas to help the homeless. There is talk of opening two or three smaller shelters in the east, west and southeast of Volusia County. There is also conversation about focusing more on getting the homeless into permanent housing than in emergency and temporary shelter.

“We believe that a come-as-you-are homeless assistance center is desperately needed in Volusia County,” said the Rev. Chris Hoffmann, co-chair of FAITH and pastor of Our Lady of Hope Catholic Church in Port Orange. “It’s a critical piece of the puzzle.”