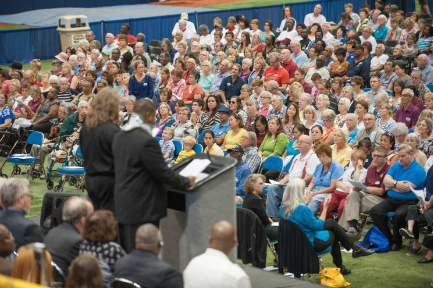 All four Pinellas County School Board candidates have been invited to stand with a faith-based group pushing a bill to curb arrests among children.

Faith and Action for Strength Together, or FAST, has invited the candidates to a St. Petersburg assembly — one of 10 held around the state — to pledge to eliminate out-of-school suspensions, reduce unnecessary arrests and support effective reading curriculum in high-poverty schools.

Three out of the four School Board candidates on the Nov. 8 general election ballot have RSVP’d and sent in short questionnaires that will be printed on pamphlets handed out at the St. Petersburg assembly. They are District 1 At-Large candidates Matt Stewart and Joanne Lentino and District 5 candidate Eliseo Santana.

FAST confirmed that District 5 candidate and incumbent Carol Cook will not be attending. The group said she didn’t send in her questionnaire either.

Johnny Watson, FAST’s education committee co-chair, said Cook pledged at an April event to make a policy change that would be against arresting kids and has since failed to follow through.

Reached Monday, Cook said she had another appointment Monday night and never received a questionnaire, but did answer two FAST questions about her willingness to work with FAST and her availability for a March event.

“We don’t arrest kids. It’s the police,” she said. “We have no say whether or not we’re going to arrest them.”

A statement from the Southern Poverty Law Center contradicts Cook’s sentiment, citing state law that says school resource officers shall abide by school district policies, and that SRO’s are “akin to a school official” rather than a police officer.

Area superintendents in January reported that arrests had taken a 44.8 percent dive from 2012 to the end of the 2014-15 school year.

The candidates attending will not be put on the spot at the assembly but will have a chance to speak about their platform relating to FAST’s key issues.