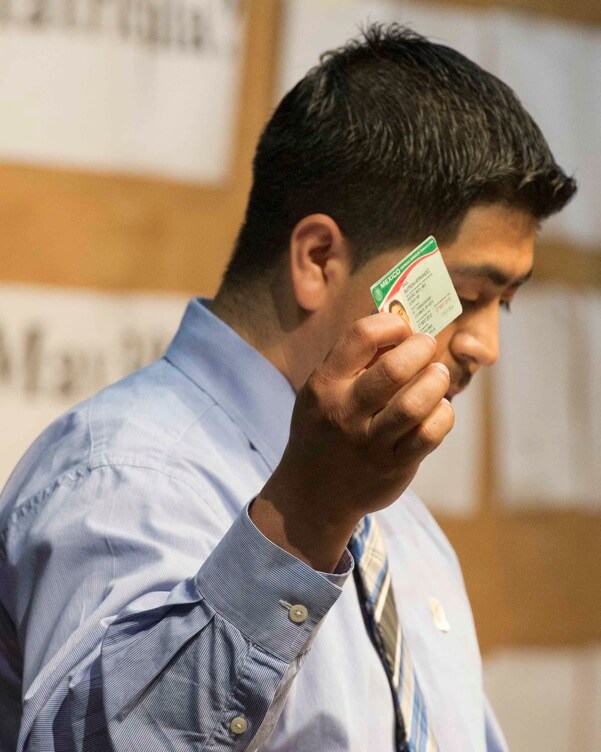 Throughout Florida’s COVID-19 vaccination rollout, some residents who lack state-issued photo IDs have struggled to get the shot, a result of the proof of residency requirements imposed by the state to clamp down on “vaccine tourism.”

But in Broward County, that obstacle could soon be reduced, as a new program aims to create local IDs for county residents who currently don’t have one — including undocumented immigrants.

Supporters of this community ID measure — which the Broward County Commission approved earlier this week — say it will not only expand vulnerable residents’ access to the vaccine, but also make it easier to sign up for other county and health services.

According to Broward Commissioner Dale Holness, who sponsored the resolution, the creation of a community ID program would be beneficial to many different kinds of marginalized groups, including returning citizens and homeless people.

“It will also help people who are senior or low-income who may have lost their identification, and it will also certainly help immigrants who might not have proper documentation.”

“This is a program that I believe will help build a better Broward County for all of us,” he added. “And it will definitely expand vaccine access because there are people currently who want to get the vaccine but don’t have any identification and get turned away.”

In an email, Nina Levine, a public information officer for the Florida Department of Health in Broward County, confirmed that Broward’s new community IDs will be accepted as valid proof of Florida residency in local vaccination sites.

Broward Sheriff Gregory Tony also stated that his agency will honor the new ID cards, and communicated in a letter of support to Holness his belief that community IDs will have a positive impact on public safety.

The approved resolution is the product of a months-long campaign of advocacy and outreach by a diverse coalition of community organizations, including United We Dream, Hispanic Unity of Florida, Florida Immigrant Coalition, Southern Poverty Law Center, the Pride Center and the Aging & Disability Resource Center of Broward County, among others.

The community ID program will be run by the Legal Aid Service of Broward County. Holness expects residents will be able to sign up for community IDs by the end of next month. The IDs will cost $20.

Community IDs include a person’s photo, name, date of birth and address.

Because they are not official government documents, community IDs cannot be used to cast a ballot or board a plane. Rather, they are meant to help recipients fulfill everyday tasks that require identification, such as signing up for a library card, filling a prescription, or being identified as a parent in school.

Across the country, faith groups and religious organizations have taken the lead in championing the spread of community ID programs. FaithAction, a Greensboro-based nonprofit, helped launch the first such program in North Carolina in 2013, and it will be involved in the Broward launch as well.

At the moment, the national “FaithAction ID Network” already includes several Florida jurisdictions, including the cities of Gainesville and West Palm Beach.

“This is already a developed program in Florida,” said Romina Montenegro, Florida advocacy coordinator for United We Dream, an immigrant youth-led network. “What we are hoping to do is spread it out as much as possible throughout the whole state.”

EXPANDING VACCINE ACCESS
In Florida, a valid state driver’s license or U.S. government-issued photo identification aren’t the only kind of documentation vaccine seekers can show to prove Florida residency. A utility bill with a Florida address and the individual’s name, or a rental agreement, are accepted as well. Mail from a financial institution or a government agency that shows the person’s name and Florida address can also be provided as proof. But still, experts say that those requirements are not flexible enough, noting that some community members, such as many undocumented immigrants, do not have a long-term lease or utility bills to their name.

“In situations where many families live in one house, the lease is usually just under one person’s name,” said Mariana Martinez, an organizer with the American Friends Service Committee, a nonprofit immigrant organization. “Not everyone that lives in that house is included. Having a local ID that demonstrates your address, your name, and your age just confirms that you are part of your community … It will be an easier process for everyone to have access to vaccines.”

Ensuring immigrant communities have adequate information about and access to COVID-19 vaccines has been a priority for WeCount!, a South Dade immigrant workers’ center.

“Currently, thousands of undocumented and housing insecure residents in Miami-Dade County are being unfairly and inhumanely excluded from vaccine access due to the state’s proof of residency requirements,” she wrote in an email to the Herald.

“Broward County’s decision to pass community IDs is a powerful example of how local government should be leading in this moment. Miami-Dade County must now follow their lead. There is no excuse for inaction.”

THE FUTURE OF COMMUNITY IDS IN MIAMI-DADE
As county commissioner, current county mayor Daniella Levine Cava championed the creation of a community ID program in Miami-Dade. She has since passed the legislative baton to District 5 commissioner Eileen Higgins.

At a community gathering last month organized by People Acting for Community Together (PACT), an interfaith community organizing group based in Miami, both Higgins and Levine Cava expressed their commitment to seeing a community ID program through in Miami-Dade, with Higgins vowing to bring the item to the Board of County Commissioners within the next 90 days.

“Miami-Dade has a dire need for community IDs. If we got it passed in Broward, they need to pass it in Miami-Dade,” said Oliver Torres, a Miami-based senior outreach paralegal at the Southern Poverty Law Center. “There’s too many vulnerable people here who cannot get vaccinated right now.”