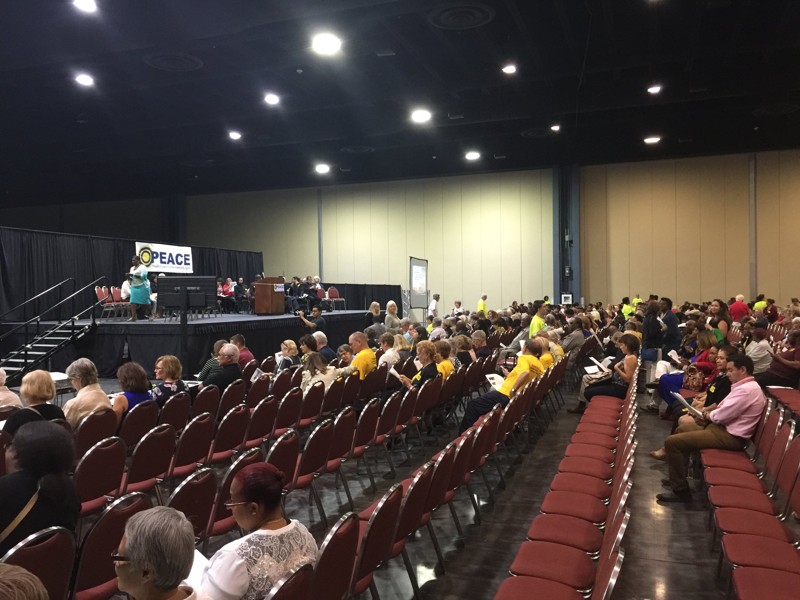 Officials from the social activism group People Engaged in Active Community Efforts called out six of the county’s seven commissioners for skipping the gathering, saying the commissioners’ absences underscored the county’s lack of progress in addressing homelessness and the creation of a community identification card that could be used by immigrants who don’t have a government-issued one.

“Are you disappointed that six of our seven county commissioners did not see fit to meet with well over 2,000 of their constituents?” Jason Fairbanks, pastor of the First Congregational United Church of Christ, asked audience members. “Our community needs to know who stood with us and who did not.”

Commissioner Mack Bernard was the lone commissioner to attend the annual PEACE meeting, held to provide updates on the group’s activities and to call attention to what it sees as urgent social needs.

County Mayor Melissa McKinlay said Tuesday she had planned to attend but canceled to care for her daughter, who was ill.

A staff member in her office said she has a number of concerns about the community ID concept, including a worry that it could be vulnerable to fraud, that it could give immigrants a false sense of security about driving without a driver’s license and that distributing the cards could push the Trump administration to cut funding to the county.

Commissioner Hal Valeche said he attended a PEACE meeting previously and objects to its format of telling elected officials of the group’s policy prescriptions and asking officials to say “yes” or “no” when asked whether they’d support those prescriptions.

“These are complicated issues,” Valeche said. “I want to say more than ‘yes’ or ‘no.’”

Valeche said PEACE mentioned the idea of a community ID system to him a few years ago.

But the nitty-gritty of the policy — the security of the IDs, the possibility that a list of ID holders might become a tool for the U.S. Immigration and Customs Enforcement agents — are questions that need to be addressed, Valeche said.

“How do you fabricate an identity out of thin air?” Valeche asked. “How do you know who they are? The devil’s in the details on this one.”

Kerner, who said he was dealing with a family health matter, also did not attend the meeting.

He has backed the concept of community IDs, but told The Palm Beach Post Tuesday that, “I remain unsure as to whether it is the proper policy decision as there are significant public records issues I am sorting through, with a primary concern that we may be compiling a list of likely undocumented persons in our county, which is not something I intend on facilitating. Should I find enough comfort in how the structure of the records would exist, I will be the first to ask my colleagues to pass the program into law.”

Commissioner Paulette Burdick said Tuesday she did not attend the PEACE meeting because she has been battling the flu. She also said she backs the concept but has concerns.

“It’s something that our residents in Palm Beach County absolutely need,” Burdick said. “But it has to be county-wide. You can’t have one jurisdiction recognize it and another not recognize it.”

Commissioner Steven Abrams said PEACE officials know his position on the community ID issues because he attended their meeting last year. His concerns, he said, remain the same, most notably that a community ID could lead more people to drive without passing the driver’s examination.

Commissioner Mary Lou Berger said Tuesday that she had other commitments and has not taken a position on community IDs.

Bernard, given sustained applause for his attendance, spoke on behalf of his colleagues.

“Our commissioners are committed to ending homelessness in Palm Beach County,” he said.

Bernard was joined on the stage by West Palm Beach Mayor Jeri Muoio. Both officials declared their support for a community ID card.

The Rev. Gerald Kisner of Tabernacle Missionary Baptist Church said PEACE is working to get support for the idea from Palm Beach County Sheriff Ric Bradshaw.

“We will keep after the sheriff to get him on board,” Kisner said. “We’ve got to get this thing done. The sheriff is not on board yet, but we cannot let that be the reason we do not get this started.”

Bradshaw wrote a letter to commissioners in December spelling out his concerns.

“PBSO will not accept any card that does not have a thumbprint on it and a corresponding thumbprint on the application,” he wrote. “As to the criteria to obtain a card, only the category 1 proof of identity is acceptable to PBSO, i.e.; a passport, a consular I.D., a state I.D. or a driver’s license. As to proof of residential address, only utility bills, tax bills, mortgage documents will be acceptable to PBSO. The card itself must contain a hologram to help prevent fraud. The bottom line is that it seems to me if in fact an individual has all these documents and lives in Palm Beach County, obtaining existing legitimate I.D. will be no problem.”

PEACE speakers described the challenges some undocumented immigrants face because of their lack of an identification.

Finding employment or visiting a friend or relative in the hospital are all more complicated without an accepted form of identification, they said.

“In Palm Beach County, families are being torn apart,” said Father Joseph Durante, vicar at Our Lady Queen of Peace Catholic parish in Delray Beach. “We expect them to build and clean our homes, do our lawns and work in our restaurants but we deny them the dignity of an ID.”

In addition to backing the concept of a community ID, Bernard pledged to make sure the county comes up with a plan for the spending of $25 million in sales tax money that has been set aside to address homelessness.

Several PEACE speakers said the county has not grasped the urgency of homelessness.

“This is a crisis,” said Toni Parker of the St. Patrick Catholic Church. “We know it. We feel it.”

Some county officials have expressed frustration with the notion that the county government has more of a responsibility than municipal governments to put money toward efforts to address homelessness. Among the county’s efforts are the establishment of a “hot team” to help county residents with urgent housing needs; an annual ball to raise money to address homelessness; and the allocation of public money to the Jerome Golden Center for Behavioral Health, which provides services to the mentally ill, including some whose illness caused or contributed to their housing needs.