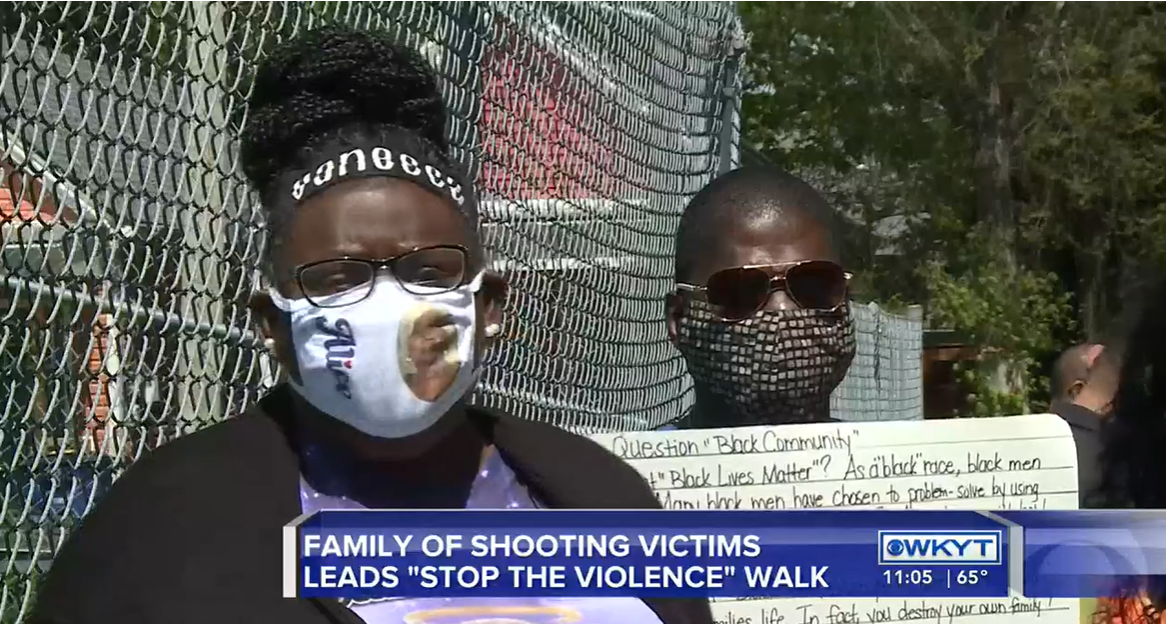 Family of shooting victim leads walk to ‘stop the violence’

The peace walk follows a shooting that resulted in the death of a 17-year-old boy.

The family of 82-year-old Alice Carter, who was killed by gunfire last October, said the shootings have to stop. She was getting out of her car, outside of her house when she was struck by bullets.

Members of B.U.I.L.D., Building a United Interfaith Lexington through Direct-action, walked in solidarity with the victim’s family.

More than six months after her death, relatives and friends wore masks and shirts with the face and name of the matriarch of their family. Carter’s daughter, Vanessa Smothers said there are no leads in the case at all.

She said she wants justice for her mother, who was an innocent bystander.

“We want to get our political leaders’ attention in hopes that they would come together to see how we’re doing peace walks, how we’re doing all these meetings to stop the violence, and they can implement some type of plan to alleviate this gun violence and hold the people that are doing the shooting accountable,” Smothers said.

Members of B.U.I.L.D said they’re continuing to ask Mayor Linda Gorton to bring in more resources that will help prevent gun violence from happening in the city.

“That is an ongoing conversation, ongoing work,” said Richard Gaines, senior pastor of Consolidated Baptist Church and member of B.U.I.L.D. “B.U.I.L.D. will continue to work with our city officials, and I’m looking forward to quelling the violence this year, we don’t want to wait another two or three years, but this year this needs to happen.”

Pastor Gaines said there’s room for everyone to get involved.

“We have grandchildren and children left behind, dealing with the loss of one who is near and dear not just to their family, but to an entire community,” he said. “It’s very personal, it’s family.”

Smothers said it’s depressing when she hears the news of another shooting.

“I feel sorry for the families, I know exactly what they’re going through,” she said.

She said she knows politicians and the police can’t fix it overnight. She’s calling on the community to make a change.

“I would like to see everybody who is shooting be held accountable, for all their murders, not only the murders, but the accidents that they’re causing, for instance, there’s a little 5-year-old boy who’s blind for life, a little girl who’s in a wheelchair, she can no longer walk,” Smothers said.

She’s spreading the word on the street she grew up on, with a message she hopes will change the whole city.

On the third Saturday of every month, Smothers leads a walk around her neighborhood in honor of her mother.