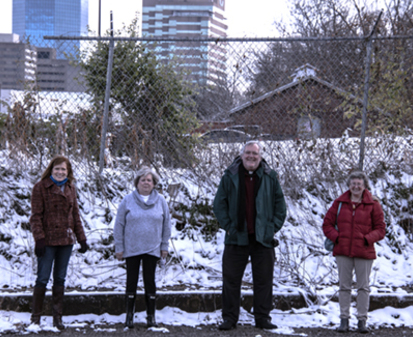 BUILD a sense of wholeness

Every spring, some 2,000 people gather in Lexington to demand action of the people who have the power to make changes that promote justice in the community. The Nehemiah Action, as the event is called, is the work of the group BUILD (Building a United Interfaith Lexington through Direct Action), a coalition of believers from across faith traditions brought together by their commitment to fostering justice.

The 2021 Nehemiah Action is scheduled for April 27, and still to be determined is whether it will be live or virtual. But as the group studies pressing local issues, one stands out as particularly crucial during the pandemic: mental health care.

BUILD’s mental health research group has visited city officials and many programs in Fayette County that address mental health issues and treat patients. Continuity of care — or lack of continuity — is a problem, said Julie Coleman, a member of St. Elizabeth Ann Seton Church and a member of the group. “And it’s hard for people to navigate the system.”

In 2017 and 2018, BUILD won continued funding for Mental Health Court so that people with severe mental illness get treatment, instead of being jailed. Because of BUILD, this program went from being a pilot program funded by short-term grants to an item in the city’s budget.

Even with that progress, people with severe mental illness still need affordable housing and places to gather. Coleman indicated the need for places where people can go when they’re in crisis.

“Now, they’re often taken to an emergency room, and if they’re homeless, they’re discharged with no place to go. And if they have mental illness, they still have it when they get out,” Coleman said.

A survey released by the Centers for Disease Control last August found that almost 41 percent of respondents were struggling with mental health issues related to the pandemic, including anxiety, depression, trauma or stressor-related disorder symptoms, increased substance use and suicidal thoughts.

“It’s common for someone to be dealing with mental illness and substance abuse problems together so that makes it harder,” said Judy Spencer, a nurse and a member of Mary Queen of the Holy Rosary, who is also active in BUILD.

Regarding mental health care in Lexington, Spencer offered, “A patient with bipolar disorder or schizophrenia might be in the ER every month, have an outpatient appointment scheduled that they don’t make and then come back to the ER again next month, where finally they need to be admitted to an inpatient hospital setting. This doesn’t work for patients who have to get
sicker before they get a chance to get better. We need real solutions to fix our mental health care system and support people.”

The group continues to meet with providers into the new year to get an even fuller picture of mental health care in Lexington and where advocacy is needed most for those who are suffering.

Brothers and sisters in action

A coalition such as BUILD exemplifies what experts in ecumenical and interreligious affairs call a dialogue of service, in which believers of different backgrounds encounter one another, learn about one another and come to deeper relationship through shared action. It was this ecumenical quality that drew Kabby Akers to BUILD. A member of Mary Queen of the Holy
Rosary and a BUILD board member, she learned as a student at Lexington Theological Seminary that Catholics have more similarities than differences with people of other faith traditions.

“We’re ‘wholer’ when we’re together,” Akers said. And while the quality of “being the people of God together” initially attracted her, BUILD’s ongoing fight for social justice is what keeps her energized.

“It’s not possible to be biblically based, to teach the teachings of the Church, and not have areas of social justice come up,” said Father Dan Noll, pastor at Mary Queen of the Holy Rosary, who currently co-chairs BUILD alongside Rev. Joseph Owens, pastor at Lexington’s Shiloh Baptist Church.

On Nov. 9, Father Noll addressed BUILD’s virtual Community Programs Assembly via Zoom on the topic of life post-pandemic, saying that even before COVID-19 people struggled with bills, education and violent crime.

“And the justice indicators in our city are not good,” he said. “Essential workers are paid poverty wages, low-income children are the least likely to successfully access remote learning, and a record number of people in Lexington are dying as a result of gun violence.

Justice means holding city officials accountable. Our call to do justice isn’t diminished during these times, it becomes paramount. The cries of the people are particularly loud this year!”

He added, “I hope we won’t return to normal. Normality was sick with injustice. The normality to which we are called is to the kingdom of God. It is up to us to reclaim our city in abundance and in community!”