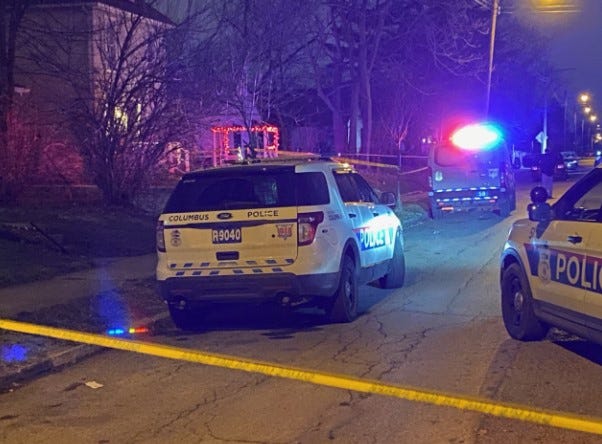 By Theodore Decker, The Columbus Dispatch

The year 2021 is off to a lethal start in Columbus, with 14 homicides occurring in the first 14 days of the new year.

That isn’t even counting the two bodies found entombed in the concrete basement floor of a Hilltop house last week. Those two victims, suspected to be a man and woman who were reported missing two years ago, are not included in the 2021 total.

To start the year, City Council is hosting a series of virtual town halls under the broad title, “Reimagining Public Safety.” The two that have been held so far offer hope that elected officials are serious about these issues, which are vital to the city’s long-term health. If you missed them, you can find them on YouTube, where they currently hold depressingly low viewer numbers for such important topics.

The first town hall looked at ways to reduce the call volume handled by city police, by redirecting lower-priority calls to trained civilians who would be better equipped to address them.

Those civilians might include mental health experts, addiction counselors or other employees who can address the many calls for service that police are now dispatched to but do not warrant a law-enforcement response.

Patrol officers will tell you that much of their shift is spent addressing these lower-priority calls that often have nothing to do with policing. Handing some of them off to civilian teams would, in theory, free up officers to focus on higher-priority calls and investigations. It’s a good idea.

The second town hall, held on Thursday night, directly addressed the ungodly spike in homicides last year, when more than 170 people were killed.

The main speaker was David Kennedy, a criminologist who has been hired by the city to lead a detailed assessment of the recent violence and identify exactly which groups are behind it. Deputy Public Safety Director George Speaks credited interfaith group BREAD — Building Responsibility, Equality and Dignity — with helping the city to bring about the current contract with Kennedy’s team and with a program begun two years ago that was loosely based on Kennedy’s violence-reduction philosophy.

Kennedy helped to pioneer an approach to violence intervention that seeks to identify the very small but very violent groups of individuals in any city who are responsible for most of that city’s bloodshed. Less than 1% of the population of a city is often connected to 50% or more of the homicides, he said. In those small groups, potential victims and perpetrators are often one and the same.

“This is overwhelmingly concentrated in communities of color,” Kennedy said. “This is, in my mind, a failure of our democracy. There is in my mind no greater racial inequity than the inequity that comes with being predictably shot and killed at rates hundreds of times the rest of the United States, year in and year out.”

To slow the violence, key players from those groups are called in by authorities and told they have two choices. They can stop the violence and take advantage of a vast network of support to redirect their lives, or they can continue the violence and face a swift and overwhelming response by law enforcement.

Done right, this approach has worked.

City council members attending the session were effusive in their praise of this approach. That is good news, but there were points of concern.

The zeal with which Kennedy’s approach was embraced might lead the casual viewer to think he is onto some new way of thinking when it comes to violence prevention. He isn’t. And it shouldn’t be new to city officials. Just down the road in Cincinnati, city leaders were working with Kennedy as early as 2007 to do pretty much what Columbus is talking about now.

That city’s gun violence dropped quickly and significantly, although Kennedy told me last fall that backsliding there occurred when changes in the political and public safety landscapes changed. Funding became erratic and success was eroded. Like Columbus, Cincinnati logged a record number of homicides last year.

The foundation of violence prevention that Kennedy’s model builds upon was well-known among city officials as long as a decade ago. That includes Mayor Andrew J. Ginther, who back then was on City Council.

Yes, they have tried other, mostly homegrown approaches since then. One needs only look at the annual homicide numbers, year in and year out, to see how effective they were.